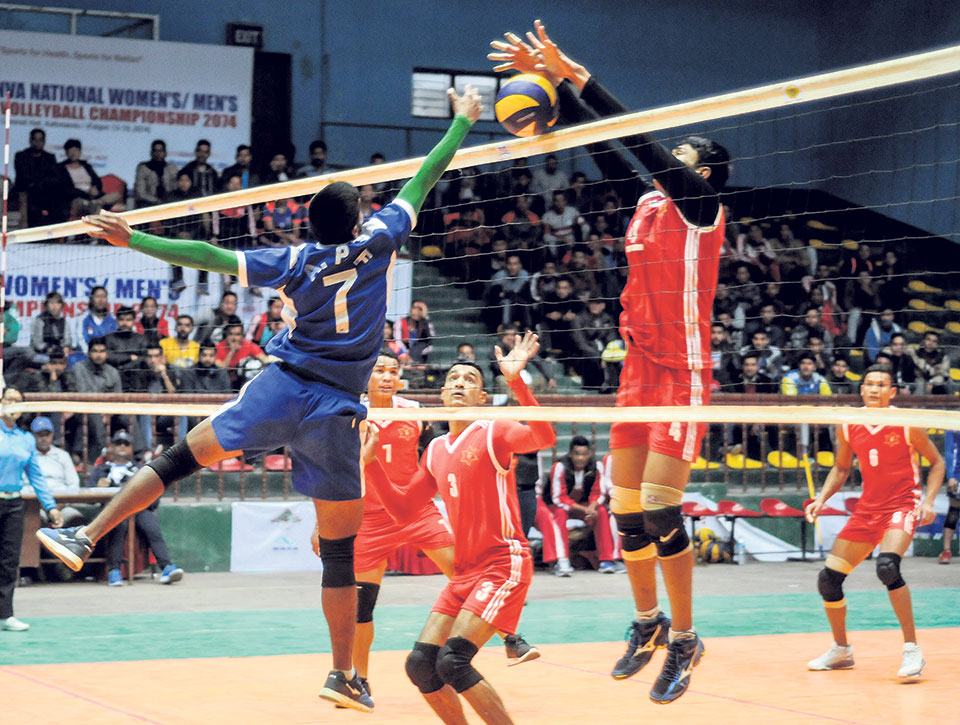 Players of Armed Police Force (blue) and Tribhuvan Army Club in action during a semifinal match of the fourth NST-NVA National Women’s and Men’s Volleyball Tournament at the National Sports Council’s Covered Hall in Tripureshwar, Kathmandu on Friday.

KATHMANDU, March 3: Help Nepal Sports Club and the departmental team Tribhuvan Army Club are set to clash in the finals of the fourth NST-NVA National Women’s and Men’s Volleyball Tournament on Saturday.

In the semifinals played at the National Sports Council’s Covered Hall in Tripureshwar on Friday, Help Nepal won a close fought battle against the departmental team Nepal Police Club in five sets of 25-21, 14-25, 25-22, 22-25, 15-12. Indian recruit Lalit Kumar collected 24 points aided by Prince Mallick’s 18 and Amrit KC’s 12 to propel Help Nepal to the final.

In women’s second semifinal of the day, deemed as ‘Departmental-Derby’, Armed Police overcame Tribhuvan Army Club in straight sets of 25-12, 25-11, 25-19. APF’s Saraswati Chaudhary contributed 20 points whereas Nebika Chaudhary finished the match with 15 points to propel their team to final.

The winners of the competition will receive Rs 150,000 each for men and women category whereas the runner-ups will take Rs 100,000 each and the third finishing teams will get Rs 60,000.

Army and Lumbini to vie for U-18 football title