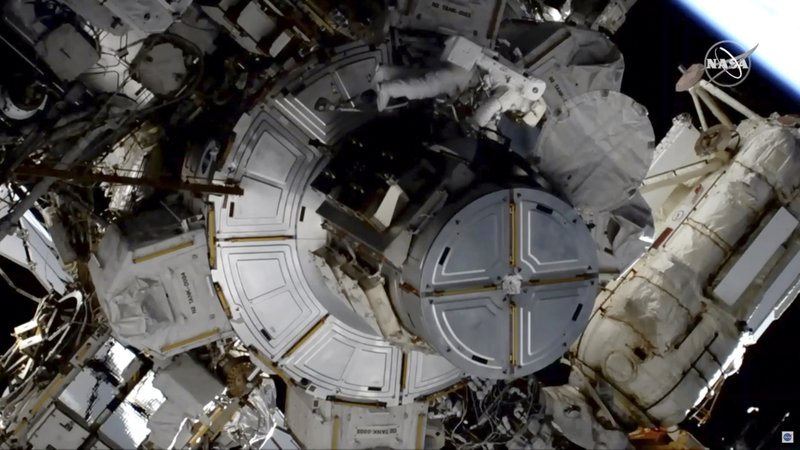 In this image taken from NASA video NASA astronaut Jessica Meir works to finish upgrading the International Space Station's power grid, Wednesday, Jan. 15, 2020. NASA is in the midst of replacing decades-old nickel-hydrogen batteries outside the sprawling space station with more powerful, longer-lasting lithium-ion batteries. The batteries are part of the station's solar power network, keeping everything running when the outpost is on the night side of Earth. It was the second pairing of Meir and Christina Koch outside the orbiting lab. (NASA via AP)

It was the second pairing of Jessica Meir and Christina Koch outside the orbiting lab. Last October, they teamed up for the world’s first spacewalk by two women.

Mission Control advised the women to remove the hood-like camera and light assembly, rather than waste any more time trying to attach it. The astronauts asked if the spacewalk would continue, given the lack of lighting for Koch.

“Good question and, yes, we will continue and we’ll try to keep you two together as much as possible,” Mission Control replied. The astronauts were relieved at the news. “Great. Perfect,” they radioed.

The helmet trouble put the spacewalkers behind in their work to replace old batteries outside the space station.

NASA is in the midst of replacing decades-old nickel-hydrogen batteries outside the sprawling space station with more powerful, longer-lasting lithium-ion batteries. The batteries are part of the station’s solar power network, keeping everything running when the outpost is on the night side of Earth.

Koch also went out with a male colleague twice last October to install three new batteries. But a charging unit then failed, prompting the need for unexpected repairs by Koch and Meir. Meanwhile, the rest of the critical battery installations were put on hold while engineers figured out why the charger failed so soon after new batteries went in.

Engineers now believe the charger got too cold in the extreme temperatures of space. The solution: exposing the chargers to the sun as much as possible during the battery work.

Mission Control expects Meir and Koch to replace three more of the old batteries, with the operation wrapping up during a third all-female spacewalk on Monday. That would make a total of five spacewalks for this latest series of battery work.

Koch is just three weeks away from ending an 11-month space mission, the longest ever by a woman. She’s been living 250 miles (400 kilometers) above Earth since last March. Meir arrived at the space station in September.

CAPE CANAVERAL, July 16: Apollo 11′s astronauts are returning to the exact spot from where they flew to the moon... Read More...