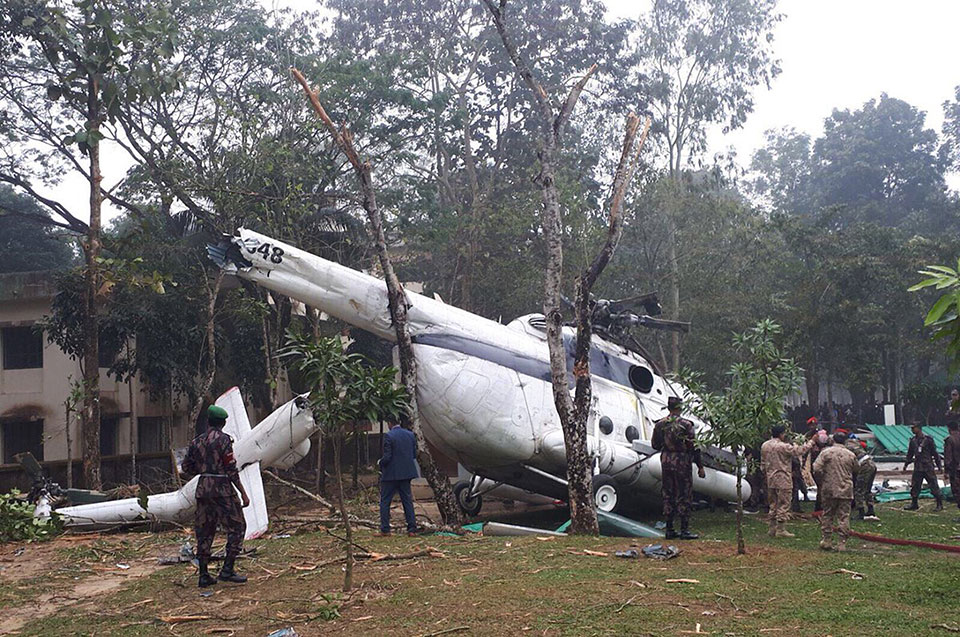 DHAKA, Bangladesh, Jan 3: A helicopter carrying Kuwait's military chief of staff crashed in Bangladesh on Wednesday, but only one person on board suffered minor injuries, Kuwait's news agency reported.

The chopper with Lt. Gen. Mohammed Al-Khadher aboard came down in trees because of thick fog, Kuwait's official KUNA news agency reported. A photo published on the agency's website shows the helicopter tilted forward on the ground with its tail snapped off.

The accident happened in northeastern Bangladesh during Al-Khadher's official visit.

Rezaul Karim, a Bangladesh military spokesman, told The Associated Press that the helicopter made an emergency landing at Sreemongol in Moulvibazar district, about 160 kilometers (99 miles) northeast of the capital, Dhaka, and all its 16 passengers and crew were safe.

He would not disclose the identity of the passengers.

5 missing after Army helicopter crashes in ocean off Hawaii

HONOLULU, August 17:  A multi-agency team scoured the ocean off Hawaii for five soldiers aboard an Army helicopter that went down... Read More...

MOSCOW, Oct 22: A Russian helicopter carrying oil workers has crashed in eastern Siberia, and officials say 10 of the... Read More...

Four tigers released back into the wild
26 minutes ago

Weather: Light to moderate rain forecast for today
56 minutes ago