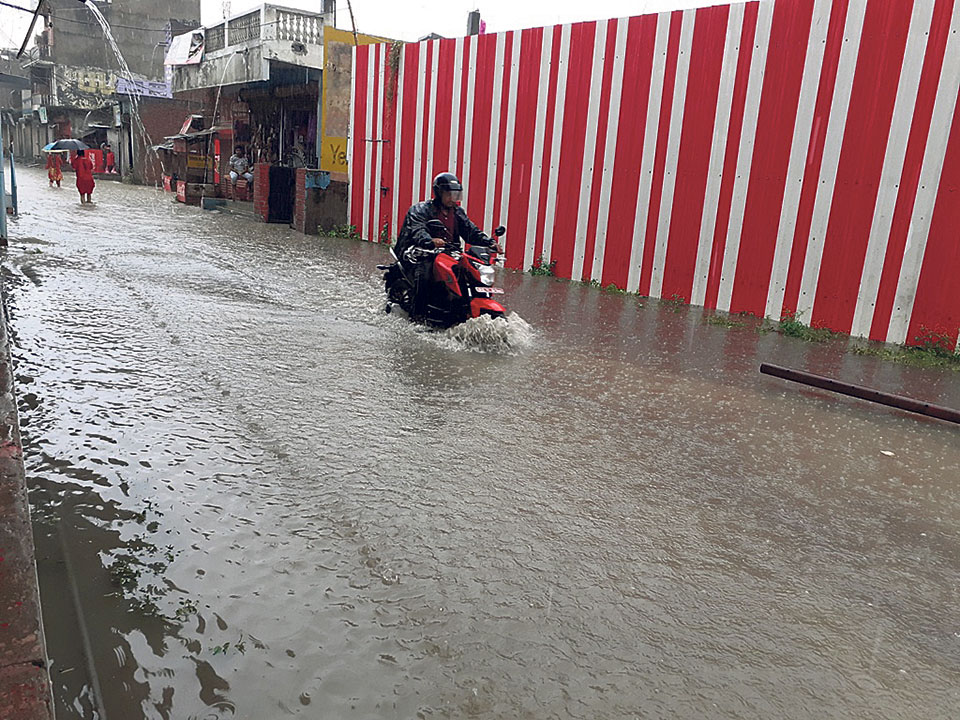 NEPALGUNJ, June 24: Torrential rainfall on Sunday inundated various parts of Nepalgunj Metropolitan City. The heavy downpour resulted in waterlogged streets at Gharbaritole, Dhambojhi, Surkhetroad, Belaspur, New Road, Ganeshpur, Bankegaun, Koreanpur, Bhrikutinagar, Sadarline among other places as the accumulated water could not get an outlet to flow.

Some of the houses and shops were knee-deep in water. Inspector Narayan Dangi, in-charge of Ward Police Office, Nepalgunj, informed Republica that several houses were inundated on Sunday.

"As the sewers are too small, they can't handle heavy flow of water," said Inspector Dangi.

These projects aim at managing sewers and waste as well as constructing roads. Even though the project has started its work, the locals have not been offered a relief. "The sewers have been jammed in several places," said Krishna Prasad Shrestha, coordinator of Civic Concern Committee for Development, adding, "The flow of water is high while the capacity of sewers is very less. This leads to inundation."

Shailendra Maharjan, engineer of the project, claimed that water is slowly finding its way out in Nepalgunj.

"Currently, the project is doing its work in Gharbarotole which is why sewers have been closed," said Maharjan, adding, "This problem would not have arrived if we were allowed to work on time."

He further informed that the project will complete its work by August 17, 2020. Nepalgunj is expected to be relived from inundation only after the completion of the project.

Despite spending millions on fixing its drainage system, Nepalgunj inundated by sewage

NEPALGUNJ, July 10: Several wards of the Nepalgunj Sub-metropolitan City have been inundated because of its dysfunctional sewerage system and... Read More...

RAMECHHAP, May 14: Torrential rainfall since yesterday midnight at Manthali of Ramechhap has flooded parts of the district’s capital. Early... Read More...