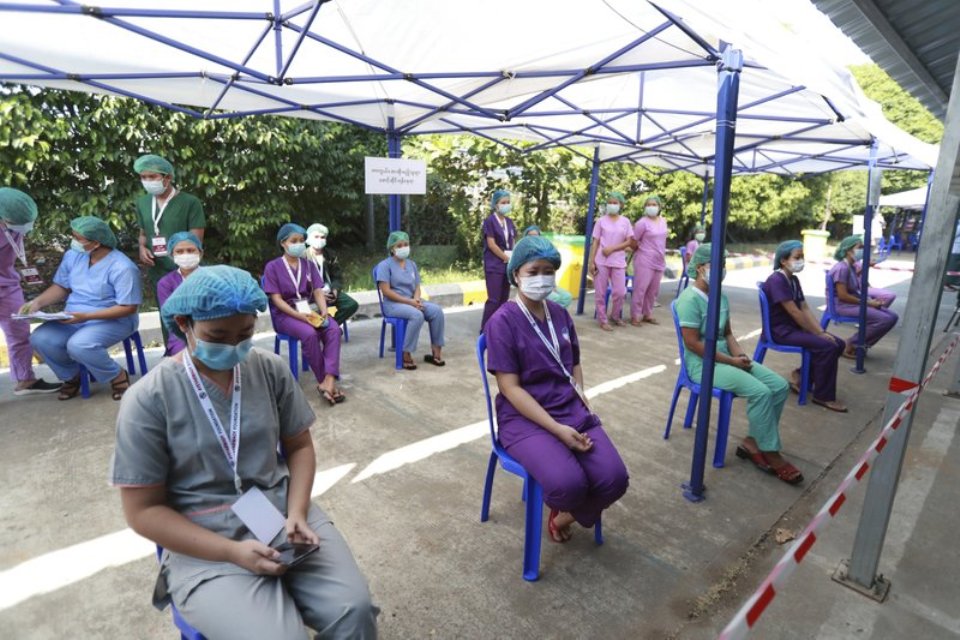 The army takeover that ousted the civilian government of Aung San Suu Kyi over allegations of fraud in November’s elections could not have come at a worse time for a country battling a steady rise in COVID-19 cases with a dangerously inadequate health system.

Health workers in government hospitals and facilities issued a statement Wednesday opposing the coup. Photos were shared on social media showing workers with red ribbons pinned to their clothes or holding printed photos of red ribbons. Others used a three-finger salute that has become a symbol of pro-democracy protests in neighboring Thailand, where a former general has led the government since a 2014 coup.

Some medical staff went on strike while others who continued work in government-run clinics made public their opposition to the new military rulers.

Some of those on strike have begun to volunteer at charity health clinics, many of which were shut down as a precaution against a surge in COVID-19 cases. The clinics that have remained reopen are extending their working hours so people can still receive care during the protest, Zun Ei Phyu said.

“We give free treatment and medicine to anyone who is in need,” she said, adding the clinics often operate with donations from charities and local communities.

Myanmar’s early response to the pandemic mirrored that of many countries: borders were nearly completely closed, lengthy quarantines were imposed on travelers, and daily life slowed with stay-at-home orders.

It seemed to work until early September, when cases exploded from less than 1,000 to some 14,300 a month later. Now with more than 140,600 confirmed cases and 3,100 deaths, Myanmar’s fragile health system faces the perfect storm of the pandemic and the coup.

“You could expect the military to take full advantage of COVID-19 as a political opportunity, not as a health care responsibility to the people of Myanmar,” said Ronan Lee, a visiting scholar at Queen Mary University of London’s International State Crime Initiative.

History shows those concerns are not without merit.

In 2000, decades after the former military junta took control, the World Health Organization ranked Myanmar’s health system as one of the worst. According to the World Bank, Myanmar’s health expenditure was around 1.87% of GDP in 2010, the year before democratic reforms began.

In March 2020, Myanmar reported just 0.71 intensive care unit beds and 0.46 ventilators per 100,000 population, which was insufficient to deal with even a moderate outbreak, according to data from the World Bank and WHO.

Donations of medical equipment have since arrived and the government has increased bed capacity with new quarantine centers, clinics and hospitals. But experts cite a lack of medical staff as a continuing problem.

The coup comes just days after Myanmar launched its vaccination campaign with some 1.5 million doses of a two-shot vaccine donated from India. Last week, Suu Kyi observed vaccinations at a hospital in the capital, Naypyitaw, and told reporters that the process must proceed carefully because the government does not have all the supplies it needs.

The military has its own medical corps and medical facilities across the country. But Sharon Bell, a researcher who previously studied the health system in Myanmar, said she doesn’t anticipate the military will have the ability to control outbreaks or conduct sufficient vaccination programs.

The military released a statement saying “prevention of the current outbreak of the COVID-19 pandemic will be efficiently carried out with momentum.”

According to Lee, when the military talks about getting the virus under control, it means “locking down the community and preventing opportunities for public expressions of opposition to their rule.”

“I expect they’ll use the pandemic as a shield to defend them from scrutiny,” he said.

France evacuates more than 300 people from Afghanistan
23 minutes ago