In October 2018, Shyrus Rijal got into a serious bike accident. The injury was so severe that people around him thought he wouldn’t make it. But luckily, he did. However, the accident changed his everyday life: he was bedbound for months. He couldn’t go to school, he couldn’t meet his friends, and he couldn’t do anything he wanted. This sudden pause in his life and his inability to do daily activities left him in a slump and he began to feel like life would never get better.

Rijal says that one particular thing in his life is solely responsible for his mental healing post-accident and that is rock-balancing.

Rijal, who is a native of Prabat but lives in Chitwan, had a fairly regular childhood. According to him, he loved (and still loves) going swimming in the rivers near his home. During his SLC breaks, when he went swimming in Modi Khola, he noticed these polished, beautiful looking stones.

“I’d seen people balancing rocks when they went to Manang and Mustang and so I thought I’d try it,” he says adding that he managed to pile the round one on top of one another. He was playing with a particularly pointy, sharp-looking stone which when he let it loose, stood vertically in perfect balance atop the round stones. “This completely surprised me,” he says. When the stones collapsed, he tried to balance the pointy stone once again and couldn’t manage to do it even after trying for three hours.

From then, every time he went to the river, he tried balancing stones, slowly one on top of another. He wanted to know why that stone was able to stand in perfect balance even with such little surface contact. And so, Rijal did a little research and found that rock-balancing was actually a thing and was considered a form of art. He looked at the works done by Micheal Grab and was amazed by how complex and intricate rock-balancing could actually become.

Rijal says that stones can be balanced on top of one another if a person can play with the stone’s center of gravity and weight distribution. Another factor that plays into rock-balancing is the need for almost trance-like focus. “Nowadays when I rock-balance, I go into a meditative trance and sometimes I don’t even hear people near me,” he says.

After Rijal got into the bike accident that almost claimed his life was when he was really able to finesse the art of rock-balancing. “When I got home from the hospital, as soon as I could walk, I went to the nearby river and started balancing stones. My mind told me I needed to do this after all I’d been through. It was what helped me recover,” he says.

When he got there and started doing it, he could balance the stones in his first try. “The feeling of peace and calm I felt after doing it was incomparable. I truly believe stone-balancing healed me,” he says. Though he felt as though he was lagging behind in the various aspects of his life like education, the prospect of a good job and a social circle, when he balanced the stones, he could forget about all these things and completely focus on the task at hand. “It felt like an escape,” he adds.

Rijal says there are typically three styles of rock-balancing: arc, basic and counter. Arc and counter tend to be a bit more complex and demand more focus as well as patience. Whenever he decides that he will go rock-balancing, he doesn’t really plan beforehand and simply goes with the flow. “I usually go to the river for the variety in the stones as I get many different options to choose from,” he says. A basic rock-balancing might take him 20-30 minutes but a complex one has taken him as much as four long hours.

Eventually, Rijal decided to document his rock-balancing acts via Instagram. He didn’t find another Nepali who was doing it and thought he should share his feats. His Instagram account (@gravity.arm) has over 11,000 followers and gets flooded with messages asking him about this art form. “When people started asking me if I used glue on the stones, I started posting videos of me balancing these rocks. These videos were very well-received and people understood it wasn’t a stunt or a trick but an art form,” he says.

Rijal’s rock-balancing art is limited to only once or twice a week but he hopes to do it more frequently once his hand (which is still slightly injured from the accident) is better.

Lastly, Rijal hopes to continue and further explore his newfound passion for rock-balancing in times to come. “My biggest aspiration is to rock-balance in all major rivers of Nepal and introduce more people to this wonderful form of art,” he concludes. 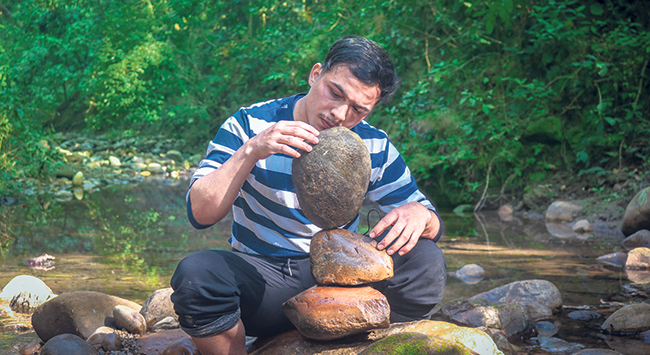 CHITAWAN, Aug 24: The Chitwan Chamber of Commerce and Industries (CCCI) has protested against the donation campaign by various political parties... Read More...

One in five Chinese Australians report attacks or threats amid pandemic, rising tensions
58 minutes ago
Rampant exploitation of sand, pebbles and stones in Kaligandaki continues unabated
1 hour ago