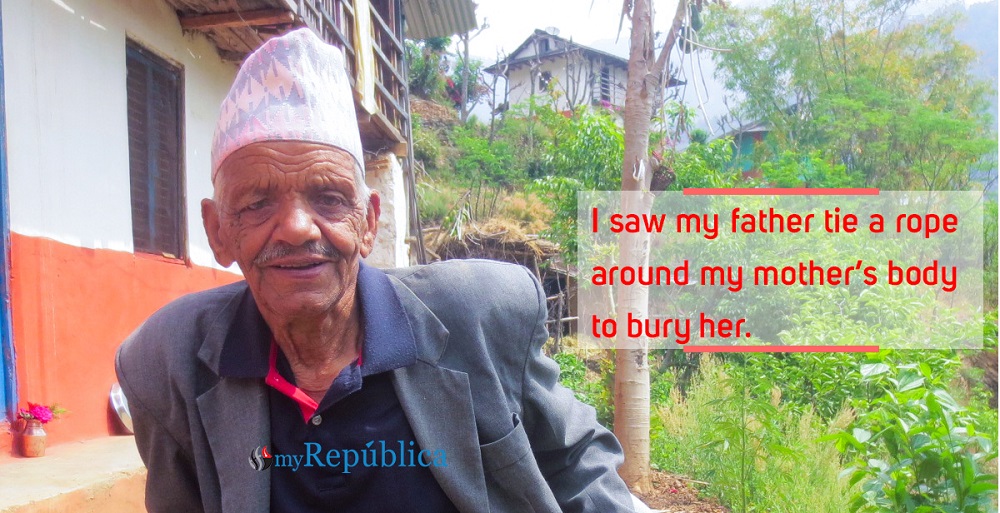 ROLPA, April 19: When the plague came to my village in Rolpa in 1943, my neighbors started dying. People fled to the forests to escape from the disease. My mother also passed away in April 1943. No one from the village came to cremate her dead body. My maternal uncles from another village dug a hole to bury her and returned without visiting our home. “My father tied a rope around the waist of the dead body, dragged it to the hole and buried,” Nandalal Pokhrel, 87, of Rolpa Municipality-1, Mewang, recalled the story of the epidemic, which haunted Nepali society some 77 years ago.

Pokhrel, who was ten then, says the scene of his father dragging his mother’s dead body is still fresh in his memory.

Patients lying on the house yards used to plead for water. However, people believed that the patients should not be given water, and so most of them died of thirst.

I also lost other relatives. I don’t clearly remember the year, but my father also died of high fever a few years later. My elder brother too breathed his last due to plague. After some years, my youngest brother succumbed to measles and an elder sister to smallpox.

People at that time used to give birth to many children due to the fear that they may die of epidemics and plagues.

Nandalal has a long list of his relatives who succumbed to epidemics at different times. One of them was his grandfather, who had died of malaria. His eldest and youngest uncles were lost to the plague of 1943.

During that time, final rites were not held as per the tradition. “Although we have a tradition of cremating a dead body, burial used to be common during epidemics,” Nandalal recalls. If one died during the journey, his colleagues used to leave his dead body to be eaten by scavengers. “People from our village had to go to Koilabas for salt. If someone, the body would be left, and final rites were not performed,” he added.

“I had a bitter past. I found skeletal remains of my mother when we were digging the foundation for our home,” he said, adding that he gathered all the mortal remains of his mother, cremated and performed the final rites years after her death.

Nandalal has five daughters and two sons. “During the time of plague, no witch doctor was consulted. However, when one was infected by another disease, witch doctors were often visited.”

According to him, the witch doctors used to feed typhoid patients with goat’s meet.

He also saw patients affected by tuberculosis and leprosy. Leprosy patients were forced to stay far away from the settlement areas, in huts, where they died without medication and care.

He compared forced isolation during that time to today’s ‘quarantine’. Isolation used to be strict, however, treatment to those people and their family used to be inhumane.

Adhikari witnessed many diseases, deaths and disasters. Health facilities have improved to some extent. He is worried about the spread of coronavirus. “However, I am not afraid of this disease. I am staying home, following the government's instructions,” he added.

As an eyewitness to many epidemic outbreaks, he thinks that the government should have invested in the health sector and made an extensive preparation to fight such threats. He is not happy hearing that the medical professionals have been working day and night without proper safety gears. “Nevertheless, I suggest all to be at home-quarantine to avoid spreading the disease.”

LAHAN, April 1: 18 persons who have recently returned from the Indian capital New Delhi after participating in a religious... Read More...