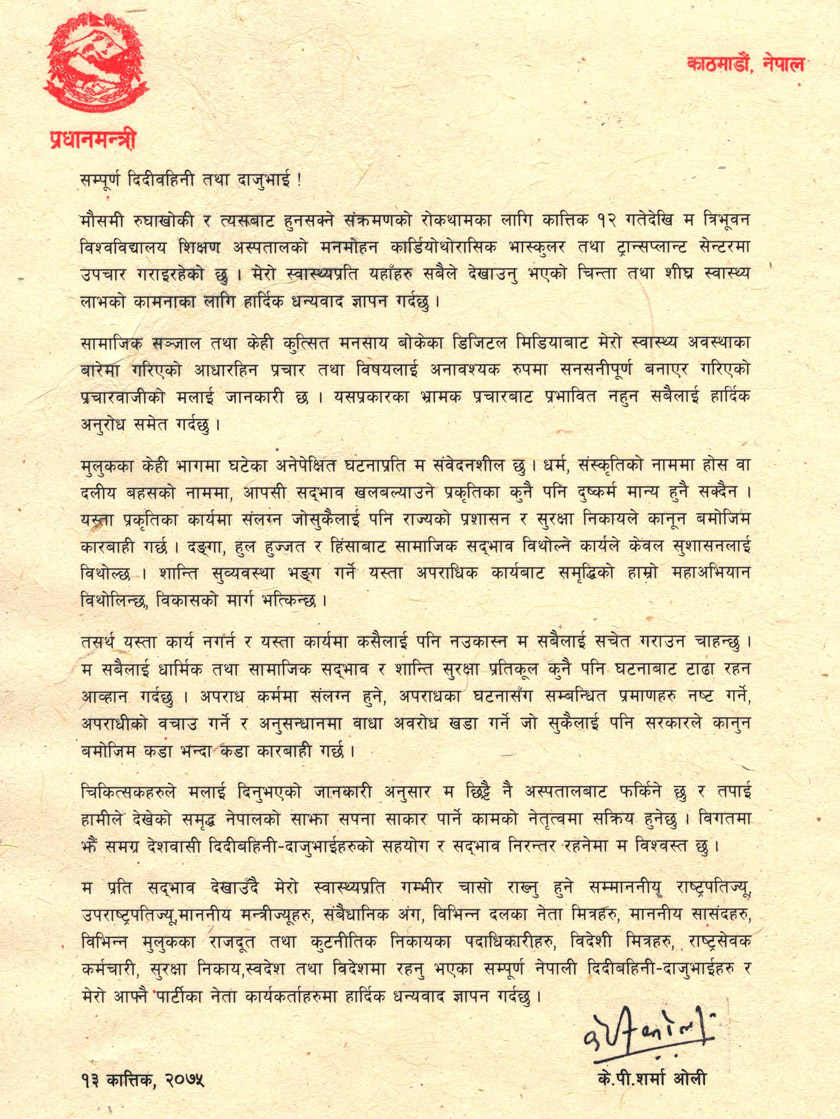 Urges not to be believe baseless news about his health condition

KATHMANDU, Oct 31: Expressing serious dissatisfaction over baseless and sensational news reports about his health condition being disseminated through various digital platforms, Prime Minister KP Sharma Oli has that he will soon return to work.

While thanking those expressing concern over his health and wishing for his speedy recovery, Prime Minister Oli said he is aware that baseless and sensational news reports about his health are being circulated in social media and a few ill-intentioned digital media platforms. “I humbly urge one and all not to be influenced by this kind of misleading information,” he said in a statement on Tuesday.

Oli said he was undergoing treatment at Manmohan Cardiothoracic Vascular and Transplant Center to prevent possible infection after he had a bout of seasonal flu. “I will soon return from hospital and lead actively to realize our common dream of a prosperous Nepal. I am confident of receiving the cooperation and goodwill of all brothers and sisters as in the past,” he said.

Doctors involved in his treatment said that his condition is improving significantly .

Dr Arun Sayami, who is also involved in the treatment, said Prime Minister Oli had breakfast Tuesday morning. “If the prime minister's condition remains stable we can discharge him in the next two days," he said.

Oli was admitted to Manmohan Cardiothoracic Vascular and Transplant Centre at Tribhuvan University Teaching Hospital Monday morning after developing chest pain and continuous deep coughing. He has started talking to visitors and doing petty things himself, according to hospital sources.

Earlier on Tuesday, senior leaders of different political parties including the ruling Nepal Communist Party and well-wishers visited PM Oli at the Maharajgunj-based hospital. Those visiting him included former prime minister Babu Ram Bhattarai, who tweeted later that Oli cracked a joke and made him laugh . Doctors have barred anyone from meeting Oli at the hospital since Tuesday evening.

Prime Minister Oli in his statement thanked the president, the vice president, ministers, heads of constitutional bodies, leaders of various political parties, lawmakers, ambassadors and members of the diplomatic community as well as the Nepali people both at home and abroad for their concern over his health.

Development should move a step forward each day: PM Oli

KATHMANDU, Nov 22: Prime Minister KP Sharma Oli has insisted that the country should take development momentum and it should... Read More...

No immediate reshuffle in cabinet: Oli

KATHMANDU, Sept 9: Prime Minister K P Sharma Oli has said that he has no plans to reshuffle the cabinet anytime... Read More...