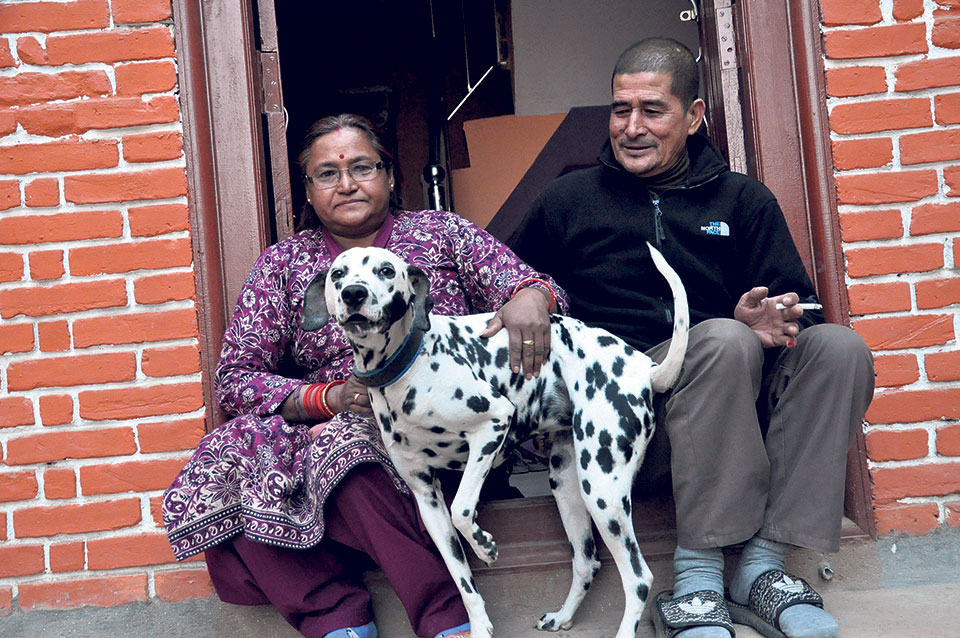 Gyanendra (right) and Rampiyari Bashukala with their Dalmatian at their home on Friday. Their son Yogesh (inset) died in the April 2015 earthquake while trying to save their dog at their home.

BHAKTAPUR, Jan 13: They lost their son during the April 2015 earthquake. While many ran for their lives as soon as the ground started shaking and buildings started crumbling, Yogesh Bashukala, 22, of Bhaktapur was more worried about his pet dog. He tried to descend from a second floor, hugging the dog tightly in his arms.  He got buried in quake rubble in seconds. The youngest son of Gyanendra and Rampiyari Bashukala, his body was later recovered by an army salvage team. He was still clutching Canty, and the dog was still breathing and quite safe.

The lucky dog could have been resented by Yogesh's parents for reminding them of their beloved youngest son and his cruel fate. Neighbors would make unkind comments right in front of them. However, the couple   became  an epitome of compassion. Canty has not only received more affection from them since the deadly earthquake but it is now the most cherished member of the family.

“This dog has become like our youngest son since we lost our actual son. Our son is no more with us, but this was there in his arms. We took him to hospital after he was pulled out of the rubble and  he turned out fine,” said Ganendra.  “It won't be an exaggeration to say he is now the focus of our happiness,” he added.

Rampiyari nods in agreement. Canty is cute and very loving, she noted, caressing the  pet. “We don't know what exactly happened that day. Many say our son died trying  to save this dog. Be that as it may, it is a gift he has left for us and  is very precious to us,” she added, gently patting the dog.

Many in the locality are moved by this story and it gets them talking about human-animal bonding. Some applaud the close bonding while some others are surprised at the level of affection for a pet that apparently caused the death of a son.
“The way we heard it, Yogesh had already come out of the house, but then he thought of the dog and went back inside and that was how he got killed,” said Krishna Byanjan, 71. “So, the parents now pampering the dog  like this is rather interesting ,” he added.

“My son bought this dog from a nearby kennel club 11 months before the earthquake and he used to be very fond of it,” the mother reminisces. “When he was alive we did not have to do anything for Canty. He would manage everthing,” she added.

It took time for the family to  recover from the shock of their loss. Their house was totally destroyed and they did not have a proper home for almost two years. During that time, Canty was kept by a relative.

“We had no other choice. My sister gave it shelter,” Rampiyari said.
But despite all the post-quake  troubles and tribulations , they never felt Canty was  a burden. They were going to  take it back in as soon as they had made better arrangements.

“How could we leave things that way  for  long? After all, it is just like our own son. People do speak unkindly sometimes, but we feel nothing but love for it,” said Rampiyari trying to  hold back her tears.

What's it about the dog that they are so fond of it? Well, Canty is so innocent for one thing. It dances with joy when given something good to eat. And it becomes crest-fallen  whenever scolded. “My boy was just like that. Very simple, very loving,” the mother recalls fondly.

While the parents have poured out all their love for Canty, the dog responds no less passionately. He becomes so intimate with them as though it understands it is standing in for its late master. “He makes us feel he understands our feelings and sometimes acts like it is still looking around for him,” Rampiyari said.

This unparalleled bonding has affected others also. Friends and relatives and even neighbors now speak more kindly of Canty.

No exact data is available on the number of pets killed during the earthquake, but Animal Nepal estimates it at over 20,000.

Family: Freed student who died has ‘completed his journey’

CINCINNATI, June 20: The family of an American college student who died days after being released from North Korea in a... Read More...

Rain with thunderstorm predicted for today
27 minutes ago