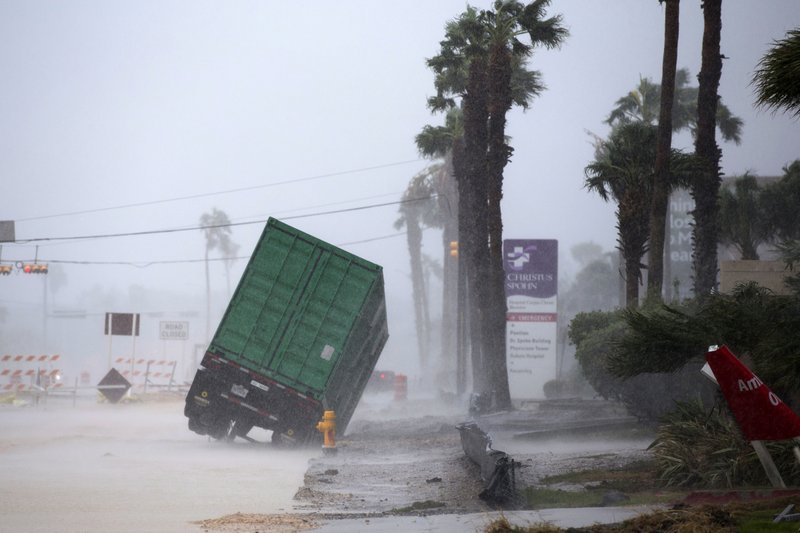 TEXAS, August 26: Hurricane Harvey smashed into Texas late Friday, lashing a wide swath of the Gulf Coast with strong winds and torrential rain from the fiercest hurricane to hit the U.S. in more than a decade.

The National Hurricane Center said the eye of the Category 4 hurricane made landfall about 10 p.m. about 30 miles (48 kilometers) northeast of Corpus Christi, bringing with it 130 mph (209 kph) sustained winds and flooding rains.

Harvey’s approach sent tens of thousands of residents fleeing the Gulf Coast, hoping to escape the wrath of a menacing storm that threatened an area of Texas including oil refineries, chemical plants and dangerously flood-prone Houston, the nation’s fourth-largest city.

Texas Gov. Greg Abbott had warned that the monster system would be “a very major disaster,” and the predictions drew fearful comparisons to Hurricane Katrina, one of the deadliest ever to strike the U.S.

Reports of damage began to emerge from Rockport, a coastal city of about 10,000 people that was directly in the path of Harvey when it came ashore.

Rockport City Manager Kevin Carruth said by telephone that he had heard reports of a tree falling into a mobile home and roofs collapsing on houses. The city, about 31 miles (50 kilometers) northeast of Corpus Christi, had peak wind surges of more than 125 mph (201 kph), according to the National Weather Service.

Volunteer Fire Department Chief Steve Sims said there are about 15 firefighters at the city’s fire station waiting for conditions to improve enough for their vehicles to safely respond to pleas for help.

“There’s nothing we can do at this moment. We are anxious to get out there and make assessments, but we’re hunkered down for now,” Sims said.

Earlier Friday, Rockport Mayor Pro Tem Patrick Rios offered ominous advice, telling KIII-TV those who chose to stay put “should make some type of preparation to mark their arm with a Sharpie pen,” implying doing so would make it easier for rescuers to identify them.

In Corpus Christi, the major city closest to the center of the storm, wind whipped palm trees and stinging sheets of horizontal rain slapped against hotels and office buildings along the city’s seawall as the storm made landfall. Boats bobbed violently in the marina. It was too dark to tell whether any boats had broken their moorings.

Fueled by warm Gulf of Mexico waters, Harvey grew rapidly, accelerating from a Category 1 early Friday morning to a Category 4 by evening. Its transformation from an unnamed storm to a life-threatening behemoth took only 56 hours, an incredibly fast intensification.

Harvey came ashore as the fiercest hurricane to hit the U.S. in 13 years and the strongest to strike Texas since 1961′s Hurricane Carla, the most powerful Texas hurricane on record. Based on the atmospheric pressure, Harvey ties for the 18th strongest hurricane on landfall in the U.S. since 1851 and ninth strongest in Texas.

Aside from the winds of 130 mph (209 kph) and storm surges up to 12 feet (4 meters), Harvey was expected to drop prodigious amounts of rain — up to 3 feet. The resulting flooding, one expert said, could be “the depths of which we’ve never seen.”

Before the storm arrived, home and business owners raced to nail plywood over windows and fill sandbags. Steady traffic filled the highways leaving Corpus Christi, but there were no apparent jams. In Houston, where mass evacuations can include changing major highways to a one-way vehicle flow, authorities left traffic patterns unchanged.

Just hours before the projected landfall, the governor and Houston leaders issued conflicting statements on evacuation.

After Abbott urged more people to flee, Houston authorities told people to remain in their homes and recommended no widespread evacuations.

In a Friday press conference that addressed Houston officials’ decision to not have a voluntary or mandatory evacuation, Houston Mayor Sylvester Turner said there might be a “greater danger” in having people who don’t need to be evacuated on roads that could flood.

Harris County Judge Ed Emmett said that because the hurricane was not taking direct aim at Houston, the city’s primary concern was heavy flooding.

“We are not having a hurricane,” said Emmett, the top elected official for the county, which encompasses Houston. “We are having a rain event.”

At a convenience store in Houston’s Meyerland neighborhood, at least 12 cars lined up for fuel. Brent Borgstedte said this was the fourth gas station he had visited to try to fill up his son’s car. The 55-year-old insurance agent shrugged off Harvey’s risks.

“I don’t think anybody is really that worried about it. I’ve lived here my whole life,” he said. “I’ve been through several hurricanes.”

Scientists warned that Harvey could swamp counties more than 100 miles (161 kilometers) inland and stir up dangerous surf as far away as Alabama and the Florida Panhandle, 700 miles (1,126 kilometers) from the projected landfall.

It may also spawn tornadoes. Even after weakening, the system might spin out into the Gulf and regain strength before hitting Houston a second time Wednesday as a tropical storm, forecasters said.

All seven Texas counties on the coast from Corpus Christi to the western end of Galveston Island ordered mandatory evacuations from low-lying areas. Four counties ordered full evacuations and warned there was no guarantee of rescue for people staying behind.

Voluntary evacuations were urged for Corpus Christi and for the Bolivar Peninsula, a sand spit near Galveston where many homes were washed away by the storm surge of Hurricane Ike in 2008.

State officials said they had no count on how many people actually left their homes.

The storm posed the first major emergency management test of President Donald Trump’s administration. The president was expected to receive briefings during the weekend at Camp David, and signed a federal disaster declaration for six coastal counties Friday night.

The last Category 4 storm to hit the U.S. was Hurricane Charley in August 2004 in Florida. Superstorm Sandy, which pummeled New York and New Jersey in 2012, never had the high winds and had lost tropical status by the time it struck. But it was devastating without formally being called a major hurricane.

Rain was expected to extend into Louisiana, driven by counter-clockwise winds that could carry water from the Gulf of Mexico far inland. Forecasts called for as much as 15 inches in southwest Louisiana over the next week, and up to 6 inches in the New Orleans area.

Harvey would be the first significant hurricane to hit Texas since Ike in September 2008 brought winds of 110 mph (177 kph) to the Galveston and Houston areas, inflicting $22 billion in damage.

It’s taking aim at the same vicinity as Carla, which had wind gusts estimated at 175 mph and inflicted more than $300 million in damage. The storm killed 34 people and forced about 250,000 people to evacuate.

COVID infection rate in Nepal drops to 14.3 percent
7 hours ago

Brazil passes half a million COVID-19 deaths, experts warn of worse ahead
10 hours ago