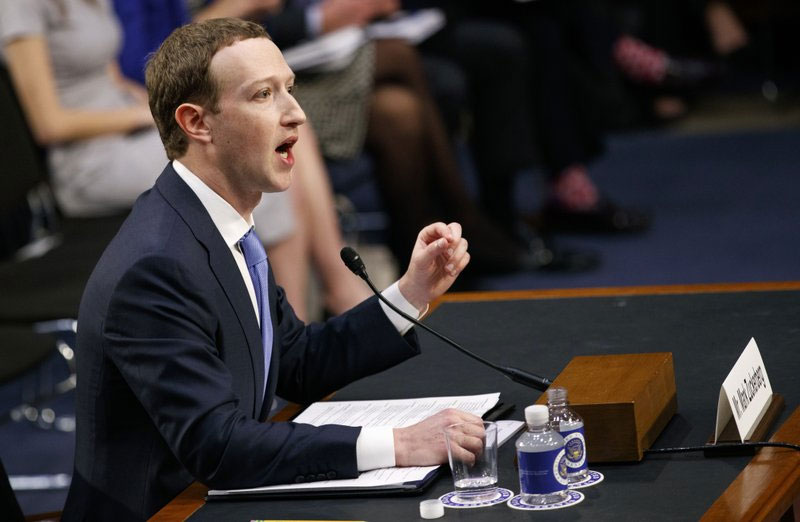 WASHINGTON, April 11: Under fire for the worst privacy debacle in his company’s history, Facebook CEO Mark Zuckerberg batted away often-aggressive questioning Tuesday from lawmakers who accused him of failing to protect the personal information of millions of Americans from Russians intent on upsetting the U.S. election.

During some five hours of Senate questioning, Zuckerberg apologized several times for Facebook failures, disclosed that his company was “working with” special counsel Robert Mueller in the federal probe of Russian election interference and said it was working hard to change its own operations after the harvesting of users’ private data by a data-mining company affiliated with Donald Trump’s campaign.

“We have made a lot of mistakes in running the company,” Zuckerberg conceded, and Facebook must work harder at ensuring the tools it creates are used in “good and healthy” ways.

The controversy has brought a flood of bad publicity and sent the company’s stock value plunging, but Zuckerberg seemed to achieve a measure of success in countering that: Facebook shares surged 4.5 percent for the day, the biggest gain in two years.

In all, he skated largely unharmed through his first day of congressional testimony. He’ll face House questioners Wednesday.

The 33-year-old founder of the world’s best-known social media giant appeared in a suit and tie, a departure from the T-shirt he’s famous for wearing in public as well as in private. Even so, his youth cast a sharp contrast with his often-elderly, gray-haired Senate inquisitors. And the enormous complexity of the social network he created at times defeated the attempts of legislators to hammer him on Facebook’s specific failures and how to fix them.

The stakes are high for both Zuckerberg and his company. Facebook has been reeling from its worst-ever privacy failure following revelations last month that the political data-mining firm Cambridge Analytica, which was affiliated with Trump’s 2016 campaign, improperly scooped up data on some 87 million users. Zuckerberg has been on an apology tour for most of the past two weeks, culminating in his congressional appearance Tuesday.

Although shaky at times, Zuckerberg seemed to gain confidence as the day progressed. An iconic figure as a billionaire entrepreneur who changed the way people around the world relate to each other, he made a point of repeatedly referring back to the Harvard dorm room where he said Facebook was brought to life.

At times, he showed plenty of steel. After a round of aggressive questioning about Facebook’s alleged political bias from Sen. Ted Cruz, for instance, Zuckerberg grinned and almost chuckled. “That was pretty good,” he said of the exchange with Cruz.

For the most part, his careful but generally straightforward answers, steeped in the sometimes arcane details of Facebook’s underlying functions, often deflected aggressive questioning. When the going got tough, Zuckerberg was able to fall back on: “Our team should follow up with you on that, Senator.”

As a result, he found it relatively easy to return to familiar talking points: Facebook made mistakes, he and his executives are very sorry, and they’re working very hard to correct the problems and safeguard the users’ data.

As for the federal Russia probe that has occupied much of Washington’s attention for months, he said he had not been interviewed by special counsel Mueller’s team, but “I know we’re working with them.” He offered no details, citing a concern about confidentiality rules of the investigation.

Earlier this year Mueller charged 13 Russian individuals and three Russian companies in a plot to interfere in the 2016 presidential election through a social media propaganda effort that included online ad purchases using U.S. aliases and politicking on U.S. soil. A number of the Russian ads were on Facebook.

Much of the effort was aimed at denigrating Democrat Hillary Clinton and thereby helping Republican Trump, or simply encouraging divisiveness and undercutting faith in the U.S. system.

Zuckerberg said Facebook had been led to believe Cambridge Analytica had deleted the user data it had harvested and that had been “clearly a mistake.” He said Facebook had considered the data collection “a closed case” and had not alerted the Federal Trade Commission. He assured senators the company would handle the situation differently today.

Separately, the company began alerting some of its users that their data was gathered by Cambridge Analytica. A notification that appeared on Facebook for some users Tuesday told them that “one of your friends” used Facebook to log into a now-banned personality quiz app called “This Is Your Digital Life.” The notice says the app misused the information, including public profiles, page likes, birthdays and current cities, by sharing it with Cambridge Analytica.

In the hearings, Zuckerberg is trying to both restore public trust in his company and stave off federal regulations that some lawmakers have floated.

Democrat Bill Nelson of Florida said he believes Zuckerberg was taking the congressional hearings seriously “because he knows there is going to be a hard look at regulation.”

Republicans have yet to get behind any legislation, but that could change.

Sen. Lindsey Graham, R-S.C., asked Zuckerberg if he would be willing to work with lawmakers to examine what “regulations you think are necessary in your industry.”

Absolutely, Zuckerberg responded, saying later in an exchange with Sen. Dan Sullivan, R-Alaska, that “I’m not the type of person who thinks that all regulation is bad.”

Ahead of the hearing, John Cornyn of Texas, the No. 2 Republican in the Senate, said, “This is a serious matter, and I think people expect us to take action.”

At the hearing, Zuckerberg said: “We didn’t take a broad enough view of our responsibility, and that was a big mistake. It was my mistake, and I’m sorry. I started Facebook, I run it, and I’m responsible for what happens here.”

He outlined steps the company has taken to restrict outsiders’ access to people’s personal information. He also said the company is investigating every app that had access to a large amount of information before the company moved to prevent such access in 2014 — actions that came too late in the Cambridge Analytica case.

MAHENDRAMNAGAR, Aug 29: The rape and murder of 13-year-old Nirmala Panta of Bhimdatta Panta Municipality-2 has created stir across the country. Read More...

Two arrested on charge of human trafficking
22 hours ago