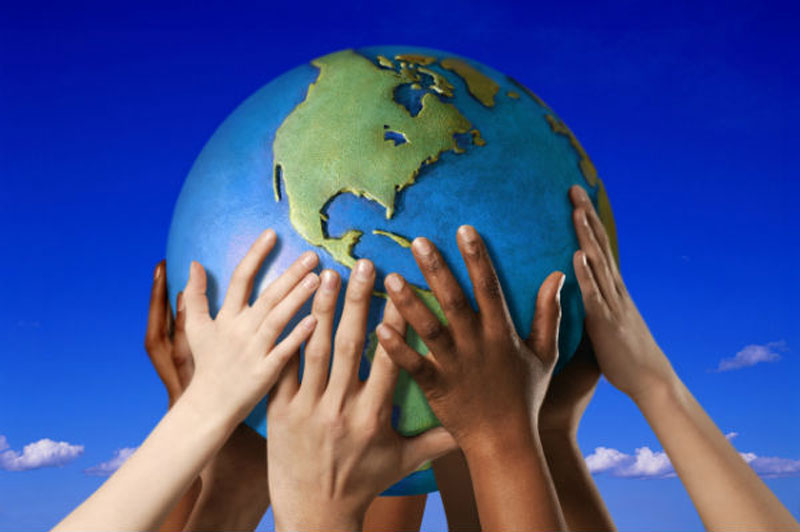 KATHMANDU, April 21: The earth has always been a home to humans. The history of formation of the earth is million years older to the inception of life on earth. Though the journey of humans on earth has developed from the Paleolithic (hunting and gathering) era, it is believed that the aquatic life evolved prior to that of humans. Therefore, humans have been sharing a strong bond with all the creatures on earth through the Stone Age to the formation of human civilization. Thus, Nature is the center of our origin and the reason of our existence on earth.

Human life itself is a gift of nature. It not only help sustain but resurrect a new life in us. The constant research and findings have been successful to claim that the fruits and medicines that are derived from tress and forests provide a healthy life to the human kind. Tropical species of plants also been used as a source of medicinal drugs. ‘Catharanthus roseus’, a small plant native to Madagascar has medical properties. It produces ‘vinblastine’ and ‘vincristine’, which are extremely effective in the treatment of two forms of cancer.

The roles of insignificant creatures are crucial for the sustainability of human life. Having it acknowledged that bees are the most active pollinator on earth, the great scientist Albert Einstein once remarked “if bees were to disappear off the face of the earth tomorrow, men would only have four more years left to live.” Moreover, bats, primates, are some other creatures that we do not come in direct contact to but are equally important for the survival of humans on earth. Similarly, every year numerous numbers of power projects are conducted in order to serve better quality life to humans. Wind energy, solar energy, hydro powers have been derived from wind, sun and rivers to generate electricity providing us a brighter world.

Humans are sentient beings and are believed to be the wisest creature unlike the rest of the creatures found on earth. History have been witnessing the power that human possess through incredible inventions and breakthroughs. On that note, it becomes our sole responsibility to make the best utilization of our capabilities. It becomes our duty to make decisions for the best interest of each creature surviving in nature because we share it with them.

US data suggests that 2015 shattered the temperature record by the widest margin ever recorded.

Global temperatures in 2015 were the warmest on record, according to data published by meteorologists in the UK and US. Having known that the temperature of earth has been rising rapidly, it is high time that we find an effective solution to make this earth a better place to live in.

We have entirely subsumed ourselves into new advancements and technologies that we have alienated ourselves from nature. We have become a cog in a machine circulating in the vicious circle of earning and spending that have blinded us to perceive the wonders of nature. Hunting and fishing have been considered a mere passion to regale ourselves. We choose to be glamorous amongst people flaunting our designer leather bags that are derived out of animals’ skin and vicious human activities. Human greed and hostility is the prime cause for the frequent calamities been occurred and devastation of nature and its resources.

As Arctic ice is rapidly disappearing, the region may have its first completely ice-free summer by 2040 or earlier. Polar bears and indigenous cultures have been suffering from the sea-ice loss. The massive depletion of ozone layer, the extinct number of mountain gorillas and white Rhinoceros, the greenhouse effect, global warming, frequent occurrence of calamities are some of the nature alarms that require to be paid our deeper attention to.

It is time that we acknowledge our mutual tie and stand for a common cause or choose to be the next dinosaur!

Even Critters too carry out this!

“If you leave the land that nurtured you, that fed you and that enabled you to become what you are... Read More...