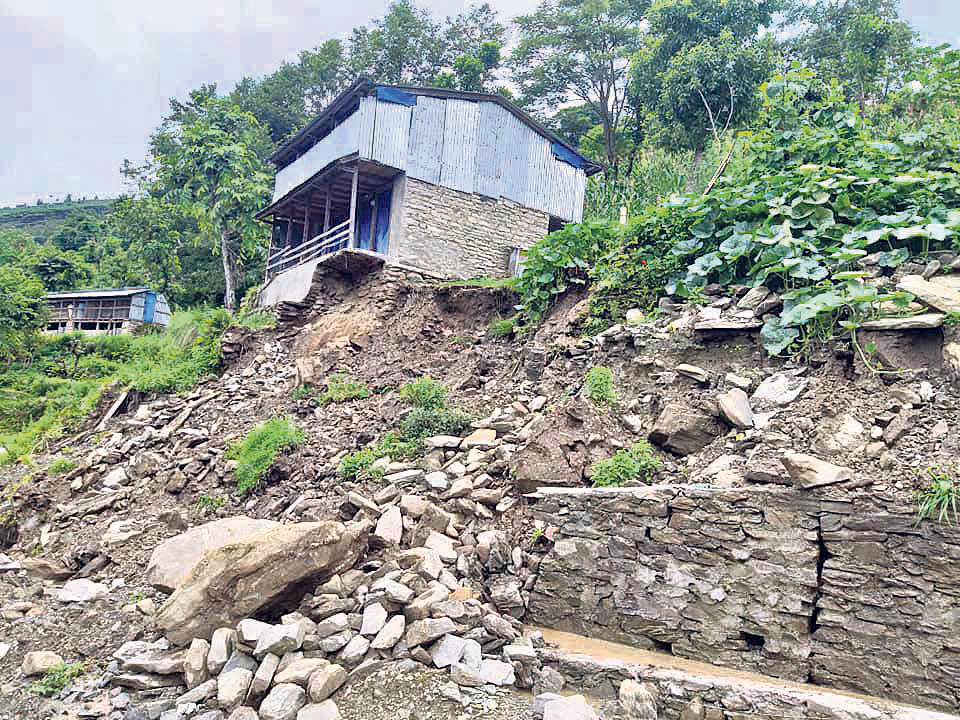 DHADING, July 31: Scorching heat in a while and torrential rain the next moment. And amid this, there are eroded roads with huge potholes. Most of the roads in rural areas of Dhading become prone to accident as soon as the monsoon arrives.

“Travelers risk their lives every time they ply the roads that are very slippery and full of potholes,” Shushila Shrestha, a local of Gangajamuna Rural Municipality, said. “It is not possible to find even single road in our district which remains in good condition during monsoon,” she added.

Haphazardly constructed roads in rural areas have further endangered nearby settlements. Some of these settlements are at high risk of landslides. Considering such threats, locals have reached out to local authorities demanding resettlement.

“Bad roads kill people. Injure you for a lifetime. And accidents are more likely in hilly zones than in the plains,” Shrestha read. “The roads are so bad these days, that it takes hours or even days to cross a few kilometers. Many households have demanded resettlement due to fear of landslides,” she added.

During the last decade, the government had considered constructing roads as its top priority.  Consequently, many smaller and bigger roads have been constructed across the country.  After the federal government and the local governments came into existence, they also focused on creating roads more than anything. Local bodies have spent a considerable portion of their development budget on building roads in the last two years. A look at the fiscal plan denotes that drive to construct roads will continue this year too. However, woes resulting from poor road construction have been affecting people across the country.

Even though reckless use of excavators for building roads in the hills has been criticized for years, authorities have not paid heed to this. Instead of consulting engineers, local representatives and excavator operators have been deciding the shape and the course of the roads.

“During the last year alone, many new roads have been constructed in our district. But while doing, the local authorities neither prepared a detailed project report (DPR), nor consulted engineers. Local leaders constructed new road tracks as they liked, “Shrestha stated.

“We have never noticed an engineering or a technician on the site to guide and supervise the construction of rural roads.”

Incessant rains during the last few weeks have brought vehicular movement in most of the district’s rural roads to a halt. Every monsoon, this happens, says Shrestha.

“And they take so much time to repair roads,” she stated, adding that roads in the rural areas give service to people not more than six months in a year.

“Vehicles have almost stopped plying those roads. Even if they try, they cannot get through,” said Shrestha.

Interestingly, some road projects in Dhading villages are presently under construction. Some of these roads were expected to complete before the end of the last fiscal year. However, the contractors did not meet their deadlines, said Nara Bahadur Lamsal, a local of Nilkantha Municipality.

“While constructing a road, engineering is the most important aspect, but here nobody cares. They were supposed to complete construction of some roads before the end of the past fiscal year, but they could not do so,” he said.

Lamsal stated that the government must stop working towards the end of the fiscal year. Or else, all developmental works will be just as futile like pouring water on silt.

Environmental assessment is a must while constructing roads. But utter negligence on this part is apparent. According to Lamsal, unscientific construction of roads has harmed both human settlements and habitat of wildlife.

“Human settlements are facing landslides and floods risk. On the other hand, wildlife is losing its habitat. In the name of roads we are harming ourselves and others,” he said.

While climate change is often blamed for changing weather patterns and extreme temperatures, some environmentalists even allude these to haphazard development.

Each province to have two medical colleges
53 minutes ago