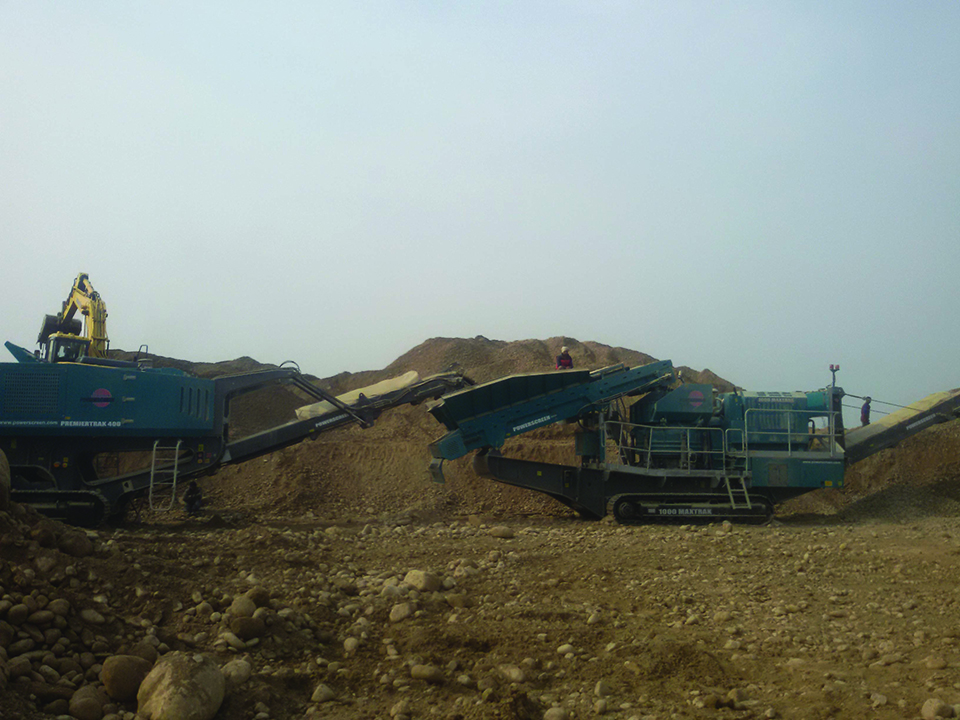 Pushpa Raj Joshi/Republica A mobile crusher plant operated illegally on the banks of the Godavari River in Kailali in this recent picture.

DHANGADI, Jan 30: Amid the lack of monitoring by the authorities concerned, rivers in Kailali are being exploited by the stone crusher and sand-mining industries. According to locals, this has become even more acute after the local bodies came into existence. As the authority of managing local natural resources have come into the hands of local bodies, and as the local representatives have failed to manage them correctly, contractors have been extracting sand and stones from the river as per their will and without following proper guidelines.

"We have been witnessing such a practice for long. Such haphazard exploitation is going to invite environmental disastours in the future. Even otherwise, mountains have been very vulnerable to landslides and the plains are being flooded in the district. But with the added exploitation of natural resources, this will invite further natural disasters," said Dilip Thapaliya, a local of Chuha Municipality. "If the authorities concerned neglect their responsibilities and allow the contractors to exploit natural resources at their will, things are bound to get worse."

There are no permissions for installing mobile crusher plants on a river. However, such plants are in operation along the banks of the Godavari River and many other rivers of the district. Following growing public concern over the issue, the district coordination committee had recently shown its interest on the issue.

According to Surya Bahadur Thapa, coordinator of the district coordination committee, a recent field visit by its members supported the locals' claim. He said that the committee is taking action against contractors found flaunting regulations.

"During our filed inspection visit, we found that resources from some rivers have been haphazardly excavated to such an extent that they might potentially change their course. We noticed very excessive and haphazard mining of sand and stone in most of the rivers. It is very sad," Thapa said.

Rivers, mountains, mines, forests and other natural resources falling under their domain can be used for their development projects by local bodies. But while doing so, they have to follow certain rules. According to locals, such rules are simply not followed by the local bodies and the contractors take advantage of that.

"Rivers materials, for instance, cannot be extracted from ecologically sensitive areas, and areas near bridges and highways. But if your review crusher plants operating in most of the rivers in Kailali, you will find that they have not been following the regulations," said Thapaliya. "If this is not stopped, natural disasters are inevitable," he added.

The district coordination committee has also given instruction to local bodies to stop excavating riverbeds until further notice. Until another provision is introduced, they cannot let contractors operate, Thapaliya informed while casting doubts on the implementation of such orders.

"Who waits for another provision? They make millions of rupees in a day by carrying materials from those rivers. They have continued doing their businesses," Thapaliya claimed.

In its report, the coordination committee has said that several parts of the Karnali River have been excessively exploited by crusher plant operators. Dozers and excavators have been used everywhere on its bank, flaunting all existing regulations.

"After our field visit, we have directed the Lamki Chuha Municipality and Janaki Nagar Rural Municipality to immediately stop such activities. Along with them we have also warned other local bodies to immediately review crusher plants operating in their area and correct them," said Thapaliya.

According to Hari Bhattarai, a local of Godavari Municipality, mobile crusher plants were operating in the Godavari River for over two months. Though local residents raised their concerns and raised their voice against it, local representatives kept mum over it. "We have been raising our voice to stop such activities but the local bodies have remained quiet. In such a case, don't you think the local representatives are being influenced by the contractors? They should have stopped all the wrongdoing here, but instead they have remained quiet," he noted.

Requesting anonymity another local stated that Nagarjun Company has the biggest share in the crusher plants that operate along the Godavari River.

"We launched street protests and also even organized a sit-in at our ward offices, municipality offices, area forest office, and the Forest Division Office demanding that the company's activities be regulated. Still, nothing happened. No action has been taken against the company till now.

According to Madan Raj Sharma, chairperson of Teghari Community Forest, the excavation of resources from rivers has been adversely affecting forest areas as well. The committee tried to draw the attention of the authorities concerned over the issue but it has to be no avail.

"We went to the municipality office several times. But the local body representatives are simply not interested to listen to us," he said. "Several settlements along the river banks are already at risk of flooding," he added.

Meanwhile, Krishna Raj Joshi, Chairperson of Godavari Municipality - 2 stated that the contractors have not received permission. They are working on their own. "Neither have we given permission. Nor the municipality office has given it. This Nagarjuna Company is working illegally," he claimed while not explaining why the municipality has not referred the case to police.

Amid this, Khemraj Bista, Chief Administrative officer of Godavari Municipality, however, said that though resources from the river can be excavated for development uses, mobile crusher plant cannot be operated. Several attempts to contact the Nagarjun Company in this regard were not immediately returned

TANAHUN, May 31: The authorities on Wednesday took under control an excavator used to illegally scoop the river bed for... Read More...

SINDHULI, May 15: The random extraction of sand, aggregates and stones in the Sunkosi River is not only taking a... Read More...