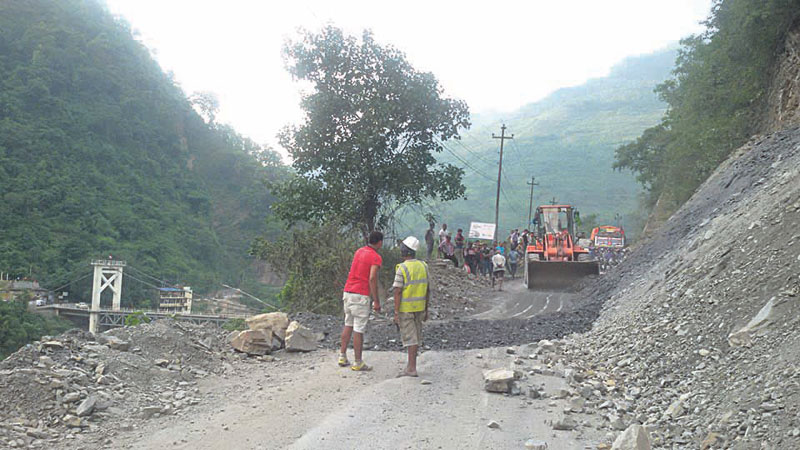 Work in progress to expand the Narayanghat-Mugling road. (Republica)

CHITWAN, June 30: The haphazard expansion of Narayanghat-Mugling road section has increased the risk of landslides at several places along the route.

Despite early warnings from geologists, several cliffs and hillsides have been cut haphazardly to widen the road section that connects Kathmandu with the rest of the country.

The road section is now prone to landslides, putting lives of passengers traveling the route at risk.

The road obstruction because of landslides is becoming increasingly common. The longest obstruction of vehicular movement was reported in January with vehicles stuck for nearly 14 hours due to a dry landslide at Kali Khola.

The officials involved in the construction, who did not take geologists suggestions seriously, now admit their mistake.

They said the cliffs should have been chopped at 45 degree angle rather than 90 degree.
“After the mountains were sliced, several places have become vulnerable to landslides,” said Ramchandra Narayan Yadav, chief of Narayanghat-Mugling Road Project. "We have tried to prevent landslides by erecting retaining walls but in vain.”

Since the road expansion began, eight landslides have taken place within a 1,500 meter section, according to project engineer Shiva Khanal.

“If the landslides continue, the road section may be blocked completely,” he said.

CHITWAN, June 25: With the onset of the monsoon rains, as many as 29 places along the under-construction Narayanghat-Mugling road section... Read More...