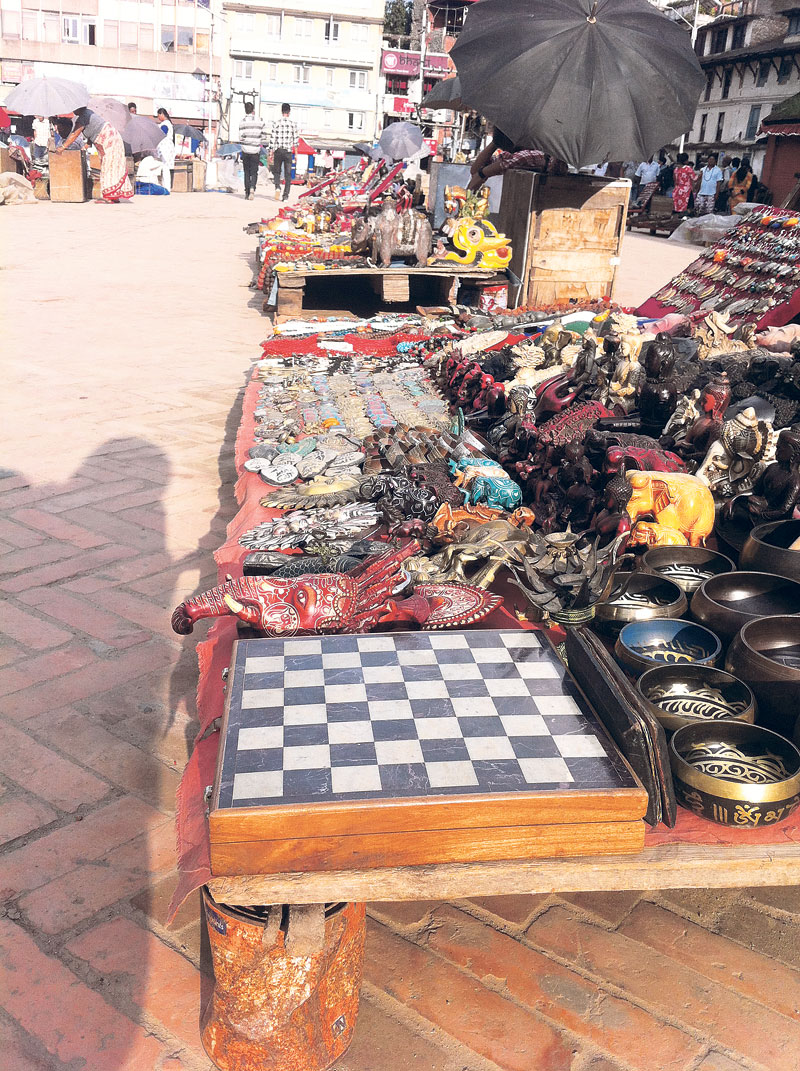 KATHMANDU, Aug 27: With the number of tourists visiting Basantapur Durbar Square dwindling, curio and handicrafts sellers at the heritage site are seeing a drastic decline in their income.

The sellers of artistic goods blame the downturn in their business on the massive earthquake that struck Nepal last year and the decision of the Kathmandu Metropolitan City (KMC) to hike the fee foreigners must pay to visit the Durbar Square area.

“There was no entrance fee 15 years ago. Later, tourists were asked to pay Rs 250 to enter the heritage area. And now, they are charged Rs 1,000 per person.”

“We have seen a gradual decline in the number of tourists since the hike in the price of entry ticket,” said Ram Lama, a handicraft shop owner from Kavre. “If this trend continues, it will be very hard for us to sustain this business,” said Lama, who has been selling curio and handicraft goods for about three decades. “Earlier, I used to earn up to Rs 50,000 a month. These days, I can only save Rs 5,000 per month,” he added.

Pushkar Karki from Sindhupalchowk shared similar experience. “Tourists bargain hard as their guides tell them that these items come cheap,” Karki, a vendor of handicraft, said. “These days local tourists are the main buyers of our products,” Karki added.

Maili Nepali, 63, from Kirtipur, shared grim prospects surrounding the curio business. “Neither we can leave this profession nor earn enough to sustain ourselves,” she said. The curio shop run by her son at Bhaktapur Durbar Square fares no better.

Tourists seem less attracted toward handicraft items as compared to the past, said Suresh Shahi, a local vendor who inherited the business from his father.

But he too blamed the hike in the entrance fee for the slow down in curio business.

"High entrance fee has contributed to keep the foreign tourists away from Basantapur Durbar Square, resulting in the slump in curio trade," he said.

KATHMANDU, Dec 15: Thailand government has waived off visa fee for tourists visiting the country from December 1 to February... Read More...

INARUWA, Jan 16: Senior journalist of Sunsari, Damber Bahadur Thapa, passed away at his residence at Inaruwa-6 this morning. He... Read More...