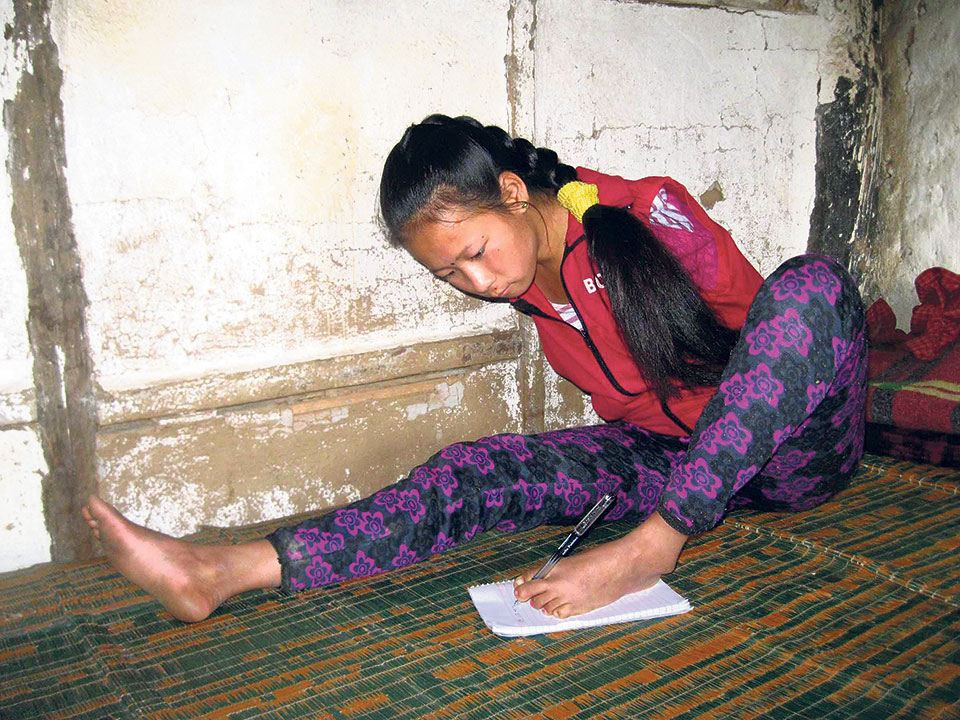 Samjhana writing her grade 11 exam with her foot.

KHOTANG, May 16: Samjhana Rai, who was born without hands, is currently appearing for the board exams of grade 11 in Khotang district. She has been writing her papers with her foot.

The 17-year-old girl of Indrenipokhari in Khotehang Rural Municipality-6 has been writing with the help of her left foot since she was in grade 1. Rai is a student of Bhagwati Dinanath Secondary School of Khotang bazaar but her exam centre is at Chisapani Secondary School in Chisapani. She passed her Secondary Education Examination (SEE) with a score of 2.35 GPA in grade C. Among all the students appearing for grade 11 exams which started on Sunday, she is the only one with different ability.

She is recognized as the second ‘Jhamak Kumari’ in her village. She is studying economics in grade 11. Her parents decided to send her to school when she showed her interest in studies. According to her family members, she used to write on floors and grounds holding small sticks with her foot. Her teachers say that she is a good student.

She is the second child of Mal Bahadur Rai and Sumita. Despite being handicapped, her capability of doing household works and attending school make her no less than the other able-bodied people. Despite writing with her foot, her handwriting is as good as that of others.

Apart from studies, she is good at chopping vegetables, cooking, using phone, and washing clothes and various other works. Not just that, she also collects timber and fodder with the help of her legs to the astonishment of many.

When she was born, there was a mixed feeling of happiness as well as grief among her family members. Her parents often worried about her future. Her interest toward education compelled them to send her school at the age of eight. Her enthusiasm and abilities have convinced her parents that they really don’t need to worry about her disability.

“We hope that she will be able to do something in future with her hard work and enthusiasm,” said her mother Sumita. She has two brothers and a sister.

She feels really proud when people compare her with Jhamak Kumari. Samjhana who has already read ‘Jeevan kanda ki Phul’ of Jhamak believes that she too will be able to do something like her.

Parineeti talks about her relationship with Maneesh Sharma

MUMBAI, Aug 9: The bubbly Parineeti Chopra who has made her debut in Bollywood with Ladies vs Ricky Bahl is... Read More...