Hamas and Fatah delegations in Cairo for unity talks 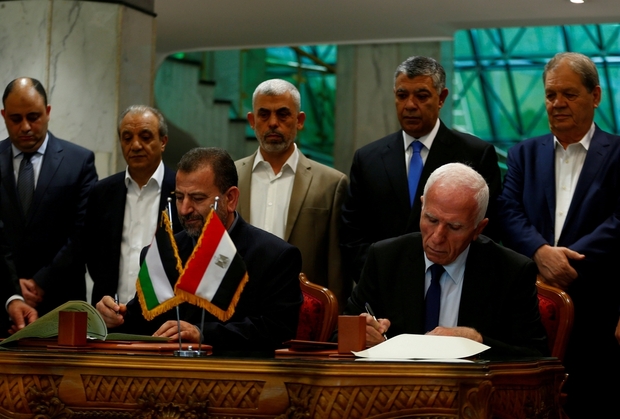 CAIRO, Aug1 : A delegation of senior Hamas leaders arrived in Cairo on Monday for talks with Egyptian officials regarding Palestinian reconciliation, Hamas spokesperson Fawzy Barhoum said in a statement.

The Hamas visit came one day after the arrival of a senior Fatah delegation in Cairo to deliver the movement’s response to an Egyptian initiative for Palestinian reconciliation.

The two delegations are still in the Egyptian capital for talks.

The Fatah delegation is led by the movement’s chief negotiator with Hamas, Azzam Ahmad, and includes the head of the Palestinian General Intelligence Service, Majid Faraj, and Fatah Central Committee members Hussein al-Sheikh and Rawhi Fattouh.

Hamas, in control of the Gaza Strip since 2007, announced on 19 July it had agreed to take part in an Egyptian reconciliation initiative that proposed a timeframe for the implementation of intra-Palestinian reconciliation, the formation of a national unity government, and an immediate lifting of all Palestinian Authority (PA) sanctions on Gaza.

According to Abu Marzouq, under the new deal, executive authorities in Gaza would be run by the PA, the Palestinian judiciary would be unified under the supervision of Egypt, and Hamas would collect taxes on behalf of the PA in Gaza.

Last year, PA President Mahmoud Abbas threatened to enforce a number of financial and legal sanctions against Gaza to pressure Hamas to dissolve its administrative committee, which de facto controls the strip's ministries.

Since then, Abbas started enforcing a number of punitive measures on Gaza, including the early retirement of approximately one third of Gaza's civil servants, deep salary cuts for nearly 50,000 employees, tax increases on fuel from Ramallah, and demands that Israel reduce its electricity flow to Gaza by 40 percent. The move triggered nationwide protests calling for an end to sanctions and for a unity government.

Hamas dismantled the administrative committee in September, but the PA sanctions remained in place.

Hamas, along with a number of PA officials, has accused Abbas of using the two million Palestinians living in Gaza as political pawns in his attempt to pressure Hamas to hand over power through the imposition of crippling financial sanctions.

Multiple attempts at forming a unity government have failed. Hamas and Fatah had reached a Cairo-brokered reconciliation deal in October, but it stalled after an assassination attempttargeting Palestinian Prime Minister Rami al-Hamdallah during his visit to Gaza in March, for which the PA blamed Hamas.

Hamas, in turn, accused the PA of complicity in the attempt.

KATHMANDU, April 18: Talks between leaders of the CPN-UML and CPN (Maoist Center) on Tuesday failed to make headway as... Read More...

KATHMANDU, April 12: Much-anticipated high-level talks between the CPN-UML and CPN (Maoist Center) planned for Tuesday was postponed to Wednesday and... Read More...

IN PICS: Landslides in Gandaki Province
19 hours ago