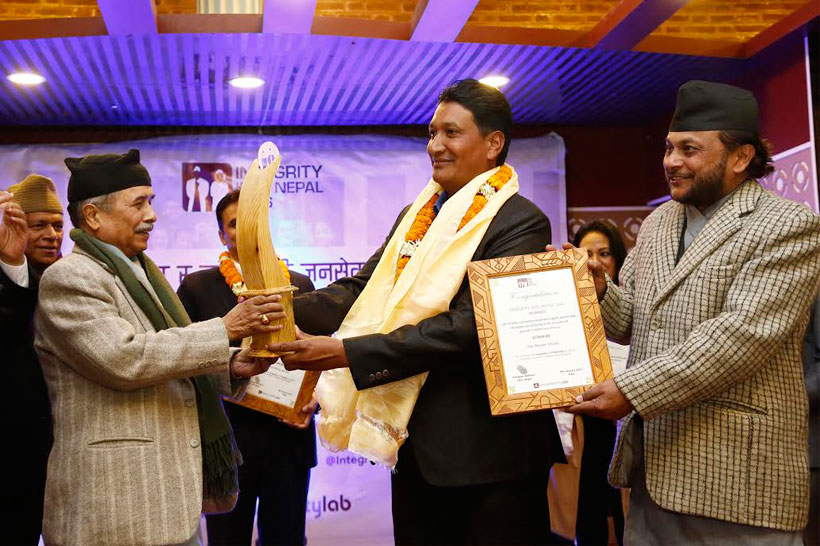 Chosen for the award from among nearly 850 nominees, Shrees' initiative for affordable education has earned him the respect of students, guardians, staff and teachers in the district.

"I feel very proud to receive this award and even more inspired to continue working hard in my post," said Shrees during the award ceremony on Thursday, noting that the award also belonged to his team of teachers and the community as a whole.

Throughout his career as a public servant, Shrees has remained focused on the well-being of his students and teaching team and executed his duties with integrity.

Integrity Idol is a citizen-run movement to identify and celebrate upstanding government officials. Initiated in Nepal in 2014, Integrity Idol has since evolved into a global campaign in four countries:

Nepal, Liberia, Pakistan, and Mali. In each country, local Accountability Lab teams run a nation-wide campaign to identify and encourage civil servants who demonstrate exemplary integrity in their work.

​Previous winners include Gyan Mani Nepal a District Education Officer from Pancthar; and Pradip Raj Kanel, the then Chief District Officer of Gulmi.

KATHMANDU, Dec 17: Shesh Narayan Poudel has been named Nepal's Integrity Idol-2017 for his efforts made to deliver government services to... Read More...