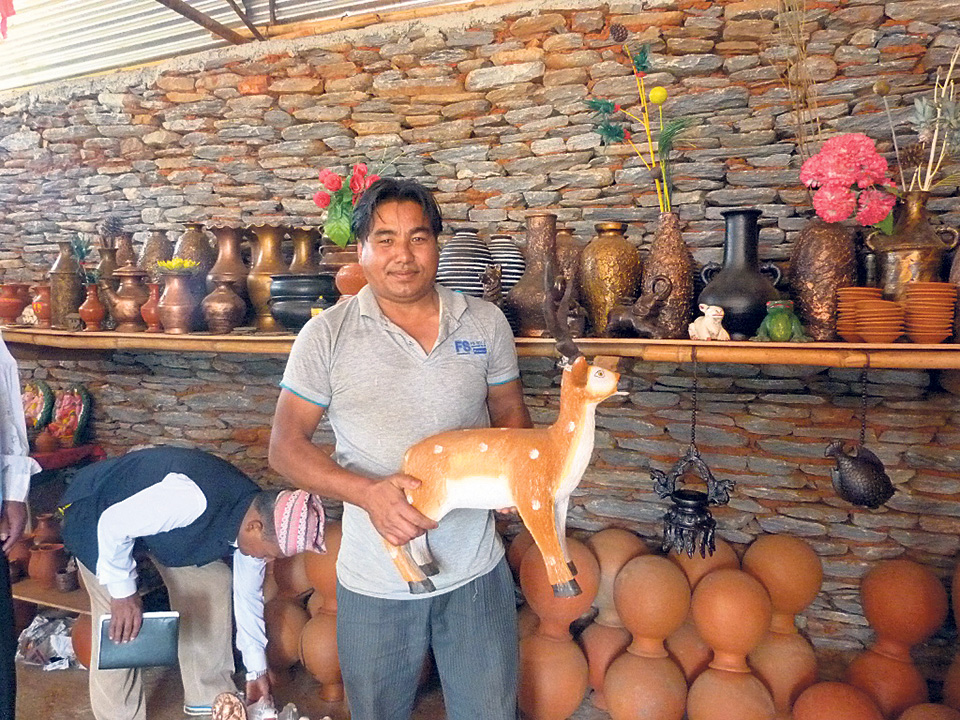 GULMI, September 5: Potters of Gulmi, who had been making traditional pottery so far, has started trying out new designs.

As demand for traditional pottery started falling, posing threat to their profession, local potters have started showing creativity by making new products. Dalle Kumal, a potter from Ishma Rural Municipality, said most of the potters in the area have started producing newer designs which are sold easily in the market.

He also said that traditional pottery suffered from cheaper plastic products which are also easy to use.

Ram Bahadur Kumal, a 62-year-old potter from the same rural municipality, said that the availability of cheaper plastic products has posed threat to their generation-old profession.

“Moreover, the new generation is indifferent toward this profession,” he added. “We are trying out new designs also to attract our younger generation to the family profession.”

Potters are trying out new designs thanks to a modern pottery training organized two years ago by the District Development Committee and Cottage and Small Industry Development Committee in association with several government and non-government organizations. The training also managed to attract younger generation to pottery business to some extent.

Laxman Parajuli, chief of District Coordination Committee, Gulmi, said that the training has raised new hopes among potters who were on the verge of leaving their profession. “Modern pottery will be beneficial for potters as modern ceramic products find market rather easily. I am always ready to support potters to preserve their age-old profession and economic prosperity,” Parajuli added.

There are around 100 households of Kumal, whose family profession is pottery, in Ammapur Bulma area. Around 50 percent of them are in the pottery business.

The training seems to have breathed a new life on pottery business in the district. Most of the potters are selling their new deigns from Koseli Ghar - a souvenir outlet. They have been ceramic products like teacups, glass, vase, and water pot, among other stuffs. Locals often use these products to gift to their friends and families.

“These products are priced in range of Rs 25 to Rs 1,000,” said Hari Prasad Pokharel, secretary of Koseli Ghar-Gulmi.

GULMI, July 22: The vehicular movement has been halted along the Chorkote-Shantipur road section after the landslide blocked the road... Read More...

Expansion of financial access a must for economic development in Province-1: NRB study
41 minutes ago

EU, UNFPA announce to continue their collaboration to combat GBV in Nepal as their two-year project concludes
43 minutes ago