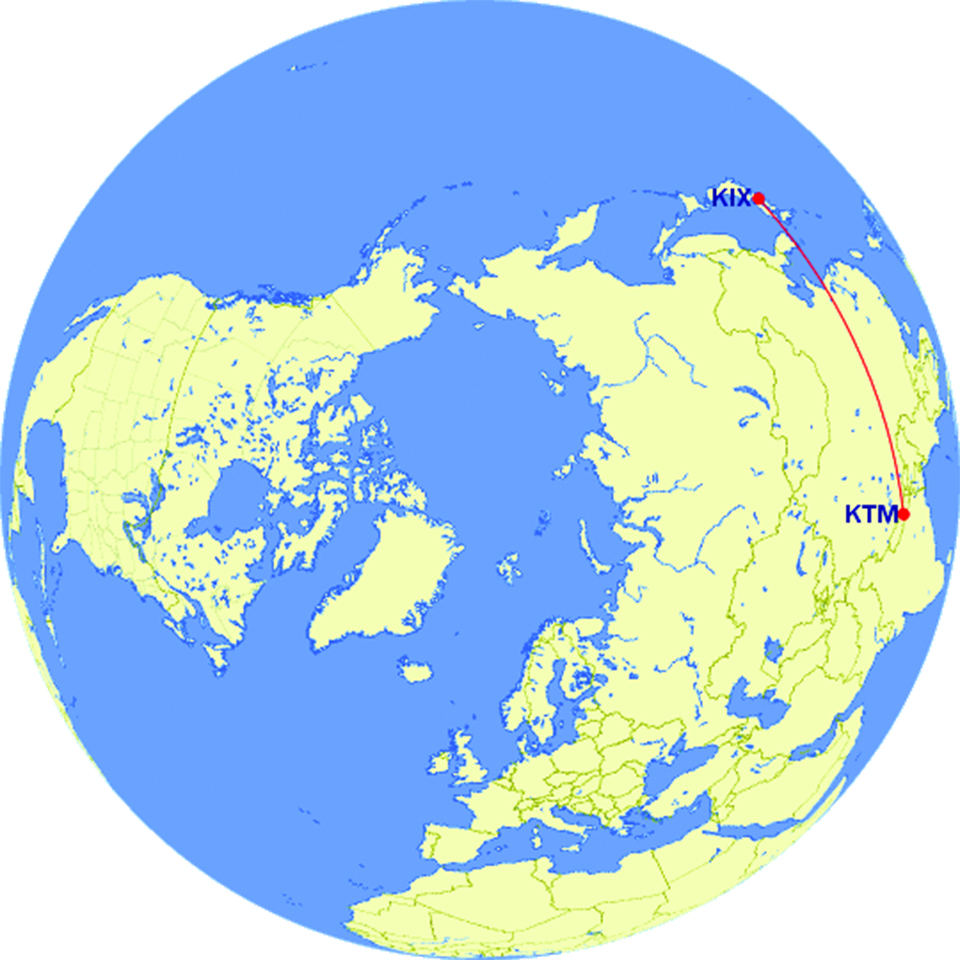 There is good prospect for trans-Himalayan airways, not just “South of Himalayas,” that could help bring in better connectivity benefits in future

It is not always easy to decide what to write next. A direct feedback on my previous piece, from someone who had been at the helm of aviation fraternity, was the trigger this time. Sensing that the basic premise of an airway was not sufficiently explained, he clarified that it is always at the pleasure of the countries being over flown. Naturally, airlines do not risk flying over areas of conflict, but it is excessive to put restrictions on the use of international airways, because of things like distrust between neighbours. It is condemnable in the strongest possible term, and it is not limited to the countries in the Gulf and Indian subcontinent. We will make short reference to blockades and some associated events. Further, it is also necessary to know the basics of airways alignment and works that have gone in making them better.

Wikipedia lists some 68 instances of famous/infamous blockades stretching back as far as 458BC to the present. Most blockades are imposed to weaken the enemy by starving it of essential supplies. There are still some active but lesser known blockades in different pockets/regions of the world. Listed at the very end was the India-imposed Nepal land blockade of 2015, making us wonder about the medieval mindset in Delhi. The Berlin blockade (June 1948 to May 1949) was typical in the sense while the three air corridors leading to West Berlin remained untouched, the land/rail and water way links were cut. Resisting the Soviet pressure, the Western powers (USA and Great Britain) countered by running an unprecedented aerial supply chain round the clock with flights landing and taking off every 30 seconds. In all 300,000 sorties were completed during “Berlin Airlift”. Soviets finally relented after seeing the determination of the Western powers in staying put. It was much like what happened here once Delhi realised the futility of the coercive technique it chose to opt.

Human beings, by nature, love to make shortcuts. They did not have to wait until Greek geometer Euclid to learn that the shortest distance between two points was a straight line. People attempt to cut across a busy road, risking getting hurt or, worse, killed, even if there was a safer over/underpass well within the reach. But it is not as simple if it relates to huge distances airlines fly between continents. To understand it better, take a junar and cut it into “equal” halves. A correct procedure would be to mark two spots on its surface first and then cut as said. But it will be easier to cheat by cutting into half first as the end result will be the same either way. The resulting circular cut is known as the “great circle”. Simplifying further, we can assume that the cut just made did touch upon three points, two on the surface (representing the cities apart) and also through sphere’s centre. Cuts that skip sphere’s centre never results in a great circle. The distance between the two, being the shortest, is also known as the “great circle distance” and forms the basis of preferred route in maritime and airborne travel.

As such, airways are aligned to keep routing between the origin and destination airports as close to the great circle path as the ground reality permits. To that end, an exercise of mammoth scale in airways restructuring that involved as many as forty nations was completed and became operational toward the end of 2002 November. It is funny that the project had a rather long name that ran, literally, against its purported purpose. Termed as “Europe Middle-East Asia Route Structure South of Himalayas”, even its acronym, EMARSSH, was quite a mouthful.

It was a big effort to tackle increasing air traffic by creating new airways and shortening lengths of existing ones. Five new bidirectional airways were introduced between Europe and Australasia. The evolved routes were termed as ‘green routes’ implying it used lesser fuel flying through. For example, an airline with one daily flight between Australia and Europe expected annual savings in time and fuel to 180 hours and 590 tons respectively. Overall, it must have had big worldwide impact. Further, the issue of airways capacity was handled simply by reducing vertical separation, from 2000 to 1000 feet and would not have been possible without improvements in navigation and tracking.

With major route restructuring having been completed, Nepal had to be content with a three sentence mention of its proposed offshoots it pursued on its own, in the one year review document: “The implementation of the EMARSSH Himalaya routes would reduce flight times and provide benefits to the operators. However to date, these routes have not been implemented. The meeting recognised and commended Nepal on their considerable effort to coordinate and implement these routes with neighbouring States.” Understandably, concurrence of both India and China will be crucial in any future route rationalisation that we are seeking to get done. That aside, there is good prospect for trans-Himalayan airways, not just “South of Himalayas” as of now, that could help bring in still better connectivity benefits in future. It is borne by credible forecast about future growth trend as stated in International Civil Organization’s Global Air Navigation Plan (GANP 2016-30).

Global air traffic has doubled in size once every 15 years since 1977 and the trend continues. ICAO further cautions that even as air transport’s speed and efficiency significantly facilitate economic progress, its growth under certain circumstances can be a double-edged sword. Unmanaged growth can also lead to increased safety risks when it outpaces the regulatory and infrastructure developments needed to support it. Airways rationalisation was the most basic step in that direction. The subsequent stages will not only be just more demanding on resources but will also ask for more sophisticated technologies and competent manpower. It goes without saying that developing countries will be hard pressed to keep at pace with program put forth in GANP.

Coming on to the closure of airways in our immediate vicinity, Indian media were, as always, upfront in vilifying Pakistan. While the low level ground skirmishes between the two have been going on since very long, it was the Indian airstrike that effectively heightened the level of conflict this time. Thereafter, Pakistan unilaterally banned all civilian flights over its territory while the ban on the Indian side was of much shorter duration, so we thought. As such, most flights heading to Europe or USA that flew over Pakistan earlier had to be pushed much further off south.

It is a matter of relief that normalcy will soon be returning to the airways in the Indo-Pak region. With India having reinstalled Modi government, Indian Air Force (IAF) did away with the “temporary ban” it had imposed in parts of northwest India that most were not aware of.

Interestingly, it came a day after Narendra Modi’s second term as Prime Minister. Given the revelation, Pakistan wasted no time in presenting a timetable of opening of all remaining 10 out of 11 airways that transited through. Perhaps, Pakistan felt it too risky to open airways while India kept ban on its side intact. It took 94 days to reopen the second track. In fact, the first RA inbound flight (RA240) from Doha flew through the second track on June 9 morning, at the time of writing this piece. It is obviously better than the long diversion, but is still not as good as the usual airway that runs much to the north. The airways will be brought back to their normal status in a smooth and orderly manner. But one still feels bad that it took so long to get the gulf of distrust bridged for now. We only wish that it never happens again.