Growing number of farmers getting into vegetable farming in Pyuthan 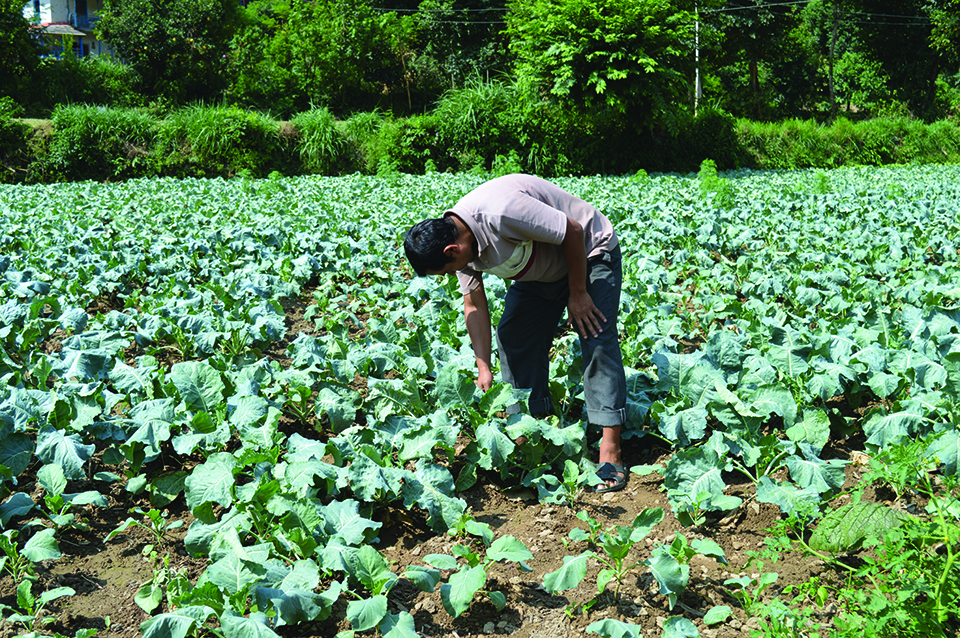 PYUTHAN, Feb 28: Farmer Duj Bahadur Rawat, 47, used to work very hard even in the past. However, the local of Sarumarani Rural Municipality - 1 would hardly make a decent living. The crops the family would grow in its farms would suffice just for around three months and the rest of the year would pass in extreme hardship. "We invested heavily in our farms, both in terms of budget and time in the past but the returns would be meager," he said.

Farmers in Pyuthan are gradually giving up growing traditional crops like rice, wheat, and maize and adopting vegetable farming consider the latter's better return on investment. Most farmers grow organic vegetables and as such vegetables high demand in the market, they get good prices for their produce.

Nearly two decades ago, he switched to vegetable farming. And that indeed turned out to be a wise decision. "If you are able to grow vegetable and sell them on time, they give you good returns on your investment. As such, I learned to grow and market the vegetables over the past two decades and presently my family earns well."

Nowadays, Rawat does not cultivate rice, maize or wheat at all. He has transformed all of his farms into vegetable farms. "Earlier, I was like a penny less man. Now, I make double of my investment at the end of the year. This is far profitable," he said.

Rawat estimates that his average annual savings to be around Rs 300,000. If he expands the vegetable farming, his profits will also increase, he believes. "When you are a vegetable farmer, another great benefit is that your family has a nutritious diet to eat. You get to eat fresh vegetables every day," he said.

Rawat was once also a migrant worker. After failing to provide well for the family despite working tirelessly in his fields, he had chosen to go to India for labor. "I spent many years in India. But no matter how much would I make, it was very hard to save," he said adding that Nepali youths should consider trying different types of farming in their hometown instead of going abroad.

He suggests to study the market and choose vegetables that have demand in the market before getting into commercial vegetable farming, he suggests citing an example of a farmer in Chitwan. The farmer from Chitwan had recently destroyed a ton of cabbage from his field after failing to get even two rupees per kg in the market. Farmers from different parts of the country protest in similar ways after they fail to get the proper price of the vegetable products in the market.

Farmers have destroyed sugarcane, vegetables, apples and sometimes spilled milk on roads. Due to middlemen, farmers often get only a small amount of the actual price that end consumers pay in the market while purchasing vegetables.

However, this is not the case regarding vegetable farmers of his district, according to Rawat. "Our vegetables are picked right from the garden. We don't have to struggle to sell it," he said.

Janak KC is another farmer who is very happy about vegetable farming. He also used to grow different types of crops earlier. After getting into vegetable farming, he has not looked back. "I have been growing vegetable in two ropanis of land. I am growing tomato, cauliflower, and cabbage. These vegetables are always in high demand," he said.

KC is doing vegetable farming since the last one decade. And there has never come a time that he had to struggle for selling his products in the market. The biggest market point of the district is in Bangdula area and he carries all his produces to the market afresh. "I do not keep my vegetables even for a day. I carry them to the market as soon as I get them off the field," he said.

"If you grow crops, you have to wait for months to get the returns, but if you grow vegetables, it's often a matter of weeks depending on their types," he said. "I urge all our youths to think over what they can do right here in their homeland. If they find an easy market for vegetable or fruit, that could be a great choice," he added.

There is no exact data on the numbers of farmers involved in vegetable farming. However, apparently, a huge number of households have left crop farming and switched to vegetable farming and the number is constantly in the rise. Noticeably, many of those farmers are returnee migrant workers. Cultivation of wheat and rice has almost disappeared in the district.

Locals work together to build road on their own

PYUTHAN, March 17: Pyuthan is the oldest and one of the most well-facilitated municipalities of the district. However, there are some... Read More...