Groom's parents among 6 of wedding party killed in road collision 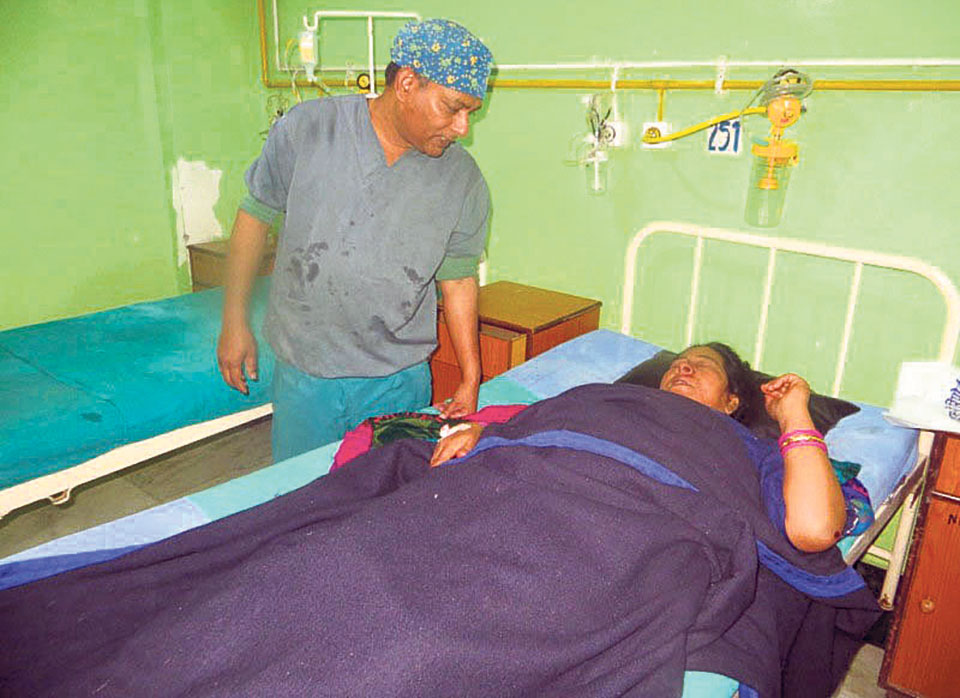 Gitadevi Khatri undergoing treatment at a Nepalgunj hospital on Thursday. Six people were killed when a Mahindra Scorpio jeep carrying a wedding party collided with a passenger bus at Rihar in Lamahi of Dang district on Wednesday midnight. Photo: Republica

The jeep (Ba 12 Cha 3122) bringing members of the wedding party from Chitwan to Shumshergunj, Banke and a bus (Ba 5 Kha 4090) coming from the opposite direction collided in Lamahi Municipality-9, Dang.

The groom’s father Man Bahadur KC, 53, and mother Bimala Devi Khatri, 45, were among the dead.

The survivors sustained serious injuries and are currently undergoing treatment at Kohalpur Medical College, Banke. None of the bus passengers was hurt, police informed.

The groom’s family had reached Chitwan on Tuesday evening to fetch the bride. They spent the whole of Wednesday conducting the marriage ceremony and left Chitwan in the evening with the bride in a wedding procession.

The accident took place an hour after the jeep left Sisahaniya. The rest of the marriage party was still resting at Sisahaniya after lunch when the police informed them about the tragic accident.

Police have not yet determined the cause of the accident. However, as the jeep driver had complained of lack of sleep the night before, police suspect that he may have felt sleepy at the wheel.

RUKUM, Nov 26: It had just been three days that Nabin Shrestha of Rukumkot and Anita Pradhan of Itahari had tied... Read More...

Man dies after choking on piece of meat
43 minutes ago

Nearly 15,000 goats sacrificed at Rajdevi temple in Janakpur
49 minutes ago