The win puts Nepal in the second position of the division two with Canada leading the points table. Nepal has six points winning the three games out of four in the league followed by the United Arab Emirates (UAE) with four points. Nepal has a negative net run rate, whereas Canada, the UAE, and Namibia have positive run rates. Namibia, which is in the fourth position, will take on Kenya on Tuesday after the scheduled match between them was washed out due to rain and wet-field. If Namibia wins the game against Kenya, it will shoot them up to second position on the table.

Kenya has lost all its three matches so far. Namibia lost to Nepal on the first day of the division two followed by wins against Oman and Canada.

Kenya’s express bowler Emmanuel Ringera picked up three top order wickets to put Nepal under pressure chasing the target of 178 runs. Vice-captain Gyanendra Malla and U-19 captain Dipendra Singh Airee were dismissed for nine and one runs respectively as Nepal was left stranded at 14 runs for three wickets at the sixth over of the response. Debutant opener Anil Kumar Sah was dismissed for golden duck.

Paras Khadka then led a counter-attack against Kenya’s bowlers but failed to repeat his feat of the last match against the United Arab Emirates as he was dismissed for 42 runs from 44 deliveries. He smashed three fours and two sixes compelling Kenyan captain to take Ringera out of bowling attack. Khadka, however, was dismissed by Nelson Odhiambo when he was caught behind by wicket-keeper Irfan Karim. He dominated the 55-run partnership with Sharad Vesawkar.

Vesawkar was next to follow when he was adjudged LBW off Nelson at the score of 19 runs.  He faced 57 deliveries and scored a boundary. However, youngsters Sheikh and Paudel shared a partnership of 87 runs to propel Nepal’s total to 169 runs for the loss of six wickets in 48.2 overs.

Sheikh made 42 runs before handing his wicket to Shem Ngoche. He faced 82 deliveries and scored two boundaries. Paudel was run out at 47 runs from 86 deliveries including a boundary to give an outside chance to Kenya with two balls remaining and as much runs to get. Sompal Kami held his nerve-scoring unbeaten run-a-ball five runs to take Nepal home in the last ball of the match.

Earlier, Nepal won the toss and elected to bowl first. The Kenyan openers put up their best opening batting partnership of the division two, adding 65 runs to the board before losing their first wicket to Lamichhane in the 17th over. Alex Obanda made a quick start smashing five boundaries in his innings of 41 runs, facing 46 deliveries before losing his stumps to the 17-year-old Nepali prodigy. Lamichhane again struck immediately in the 19th over to dismiss Dinesh Gondaria for a boundary to give Nepal second break-through of the match.

Opener Irfan Karim kept the scoreboard ticking with his cautious approach at the other end before getting stumped off Basant Regmi by part-time wicket-keeper Gyanendra Malla. Malla had replaced Dilip Nath behind the wickets after the latter was ruled out of the match due to injury. Karim made a patient 42 runs facing 100 deliveries without a single boundary. Kenya was at 103 runs for the loss of three wickets in 32.2 overs.

Lamichhane produced the best moment of the first innings for Nepal, picking up Kenyan skipper Rakep Patel and batsman Ruban Patel in back-to-back deliveries after being brought back in the attack by Nepal skipper for the leg-spinner’s second spell. Rakep scored a run and Ruban was dismissed first ball duck. Lamichhane was on hat-trick but veteran batsman Collins Obuya negotiated no further damage. Kenya was reduced to total 104 runs for the loss of five wickets in 33.2 overs.

Lamichhane completed his first five-wicket-haul, and best bowing figures by a Nepali bowler in List-A cricket, dismissing Nehemiah Odhiambo stumped in last delivery of his full quota of 10 overs. Sompal Kami picked up the wicket of Obuya and Sharad Vesawkar clean-bowled Gurdeep Singh to put Nepal in driving seat. Obuya scored 27 runs facing 61 deliveries with no boundaries and Gurdeep made two runs.

However, the last wicket partnership of 38 runs between Nelson Odhiambo and Shem Ngoche added valuable runs to the Kenyan total.

Ngoche dominated the partnership smashing two sixes off Sompal deliveries and a four on his way to unbeaten 23 runs from 15 deliveries. He was supported by Nelson who remained not out at 24 runs from 57 deliveries with no boundaries, taking the Kenyan total to 177 runs in 50 overs for the loss of eight wickets.

Elsewhere, home team Namibia defeated Canada by 17 runs to keep the qualification hopes alive. Also, the UAE defeated Oman by 46 runs to take the third position on the league table.
Nepal will play final league game against Canada on Thursday.

Sandeep Lamichhane poses with his player of the match trophy. 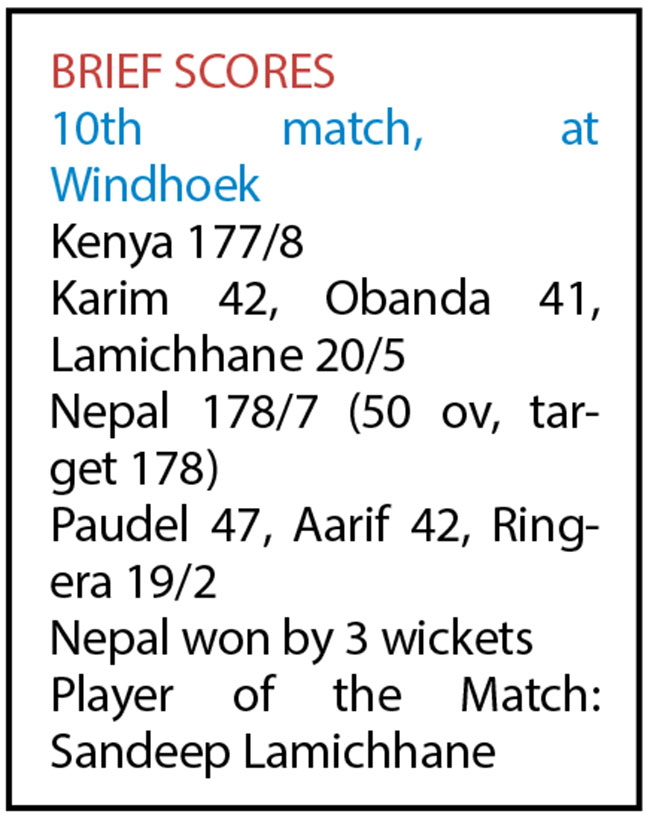