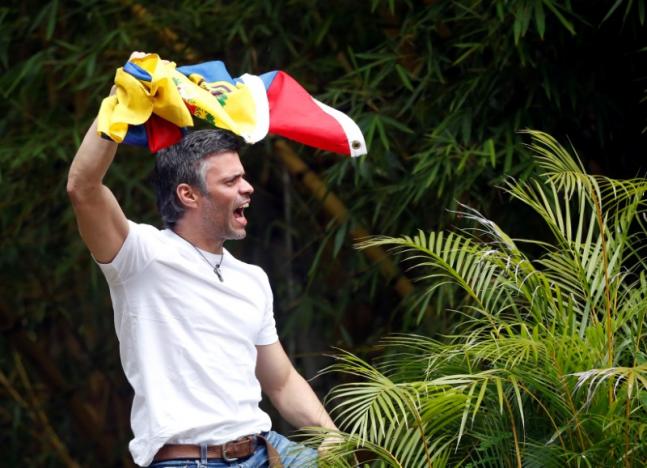 Hours after his pre-dawn transfer from the Ramo Verde military jail, Lopez appeared over a wall of his Caracas house, waving the Venezuelan flag and punching the air before a crowd of supporters who cheered and cried upon seeing him.

In a message released by his party, the 46-year-old hardliner urged opposition supporters to continue street protests against President Nicolas Maduro, which are in their fourth month and have led to at least 90 deaths.

"If maintaining my fight for freedom means running the risk of returning to a cell in Ramo Verde, I am more than happy to take it," he said in the message read by Freddy Guevara, the No. 2 in Lopez's Popular Will party.

"Today, I am a prisoner in my house, but so are the Venezuelan people. What kept me going in the toughest days was knowing that whatever suffering I endured was nothing compared to our people."

Lopez's release, aided by foreign pressure, gave some rare cheer to Venezuela's opposition who have otherwise seen Maduro give few concessions in their demands for freedom of activists, general elections and fixes for an economic crisis.

"Despite being under house arrest, he showed his face to the country," said Maria Garcia, 36, a business consultant, outside his house. "What we need to do now is stay in the street, because we need to achieve not just the freedom of Leopoldo but also the freedom of the Venezuelan people."

A photogenic, Harvard-educated former mayor and economist, Lopez would likely be a popular opposition presidential candidate if able to run in any future vote.

He is serving a sentence of nearly 14 years.

While the socialist Maduro may be calculating Lopez's return home will ease pressure on him, opposition leaders presented it as a triumph for their protest strategy and a sign the government was caving.

It was not clear, however, how Lopez's presence at home could materially weaken Maduro, who is plowing ahead with a plan to create a parliamentary superbody that will be able to rewrite the constitution and even dissolve state institutions.

The opposition has long called Lopez a political prisoner, and leaders around the world, including U.S. President Donald Trump, had been pressing for his full freedom.

The U.S. State Department called the decision a "significant step in the right direction," while urging full freedom for Lopez and another 400 opposition prisoners.

Maduro for years opposed measures to release Lopez, describing him as a dangerous terrorist who sought to overthrow him through street violence. Government supporters also often note Lopez's role in a short-lived 2002 coup against the late former leader Hugo Chavez when he helped arrest a minister.

On Saturday, Maduro extended an olive branch of sorts.

"I as head of state accept the (Supreme Court's) decision, and what's more, I support the decision. And you all know my absolute and profound differences with LL," Maduro said, referring to Lopez only by his initials.

"God willing this decision ... will be understood, and Mr. LL, after almost four years in Ramo Verde, will give a message of rectification and peace."

Venezuela's Supreme Court said Lopez had been given the measure due to health problems, but his family countered that he is in good shape and he looked robust as he waved enthusiastically.

At Maduro's behest, Venezuela on July 30 will elect a controversial Constituent Assembly.

The opposition says that is a power grab meant to keep the socialists in office and annul the existing opposition-controlled legislature against the will of the people.

Several hundred supporters rallied through the day outside Lopez's home in the upscale Caracas neighbourhood of Los Palos Grandes, some wearing shirts emblazoned with Lopez's face.

They waved Venezuela's flag, chanted slogans and set off fireworks to celebrate.

"I think this is the first day of the transition," said Maria Antonieta Witzka, 57, a physical therapist. "The government is realizing that we are the majority."

Though a hero to many, Lopez has also faced criticism from some within the opposition for at times being headstrong and domineering. He founded the Popular Will party after splitting with the First Justice party that he had also helped found.

Though Lopez had publicly called for peaceful resistance to Maduro in 2014 and was behind bars during most of the unrest that year which killed 43 people, prosecutors said his speeches sent subliminal messages and constituted a call to violence.

One of the prosecutors who led the case later fled the country and said the proceeding had been a mockery of justice.

Lopez is the scion of wealthy families and a direct descendant of the sister of Latin American independence hero Simon Bolivar as well as of Venezuela's first president, Cristobal Mendoza.

Pro-government critics paint him as a dangerous radical in the pocket of Venezuela's wealthy elite and the U.S. government.

KATHMANDU, May 4: US Congressional Delegation led by Nancy Pelosi is arriving in Kathmandu today on an official visit. ... Read More...