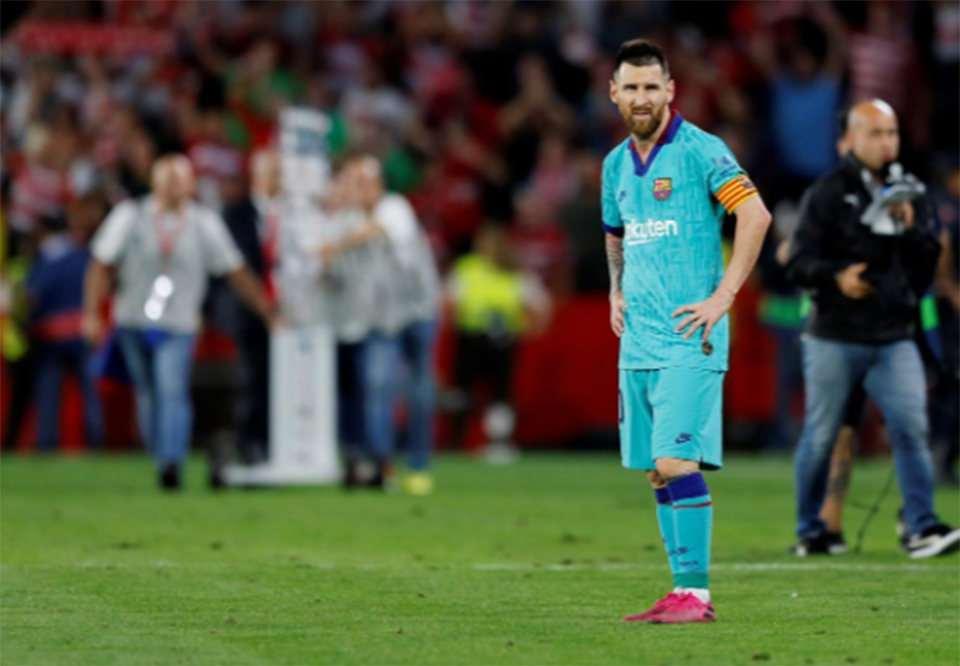 GRANADA, Spain, Sept 22: Barcelona were left reflecting on their worst start to a season in 25 years after falling to a shock 2-0 defeat at Granada on Saturday as the La Liga champions’ woeful away form continued and the promoted side climbed to the top of the table.

The Catalans started without all-time top scorer Lionel Messi as well as teenage sensation Ansu Fati and fell behind in the second minute when Ramon Azeez headed home after Barca left back Junior Firpo had lost possession in his own half.

Barca coach Ernesto Valverde brought on Messi and Fati at halftime and although their introduction led to an improvement in the visitors’ play, Granada doubled their lead in the 66th minute from the penalty spot.

A VAR review spotted that substitute Arturo Vidal had handled the ball and forward Alvaro Vadillo struck confidently to beat Marc-Andre ter Stegen, who had saved a penalty from Borussia Dortmund’s Marco Reus in the Champions League on Tuesday.

“This defeat hurts us and makes us very worried and we need to really take a hard look at ourselves if we are to improve,” Barca’s Luis Suarez said after a second defeat in five league games confirmed the club’s worst start since the 1994/95 season.

“It was very hard for us after going behind in the first few minutes, we didn’t manage to dominate the game in any way. We need to analyse what has gone wrong in these away games; we are obviously concerned about the lack of chances we are creating.”

The Catalans are seventh in the La Liga standings with seven points after five matches, while Granada sit at the summit with 10 points.

Second-placed Sevilla also have 10 points and can go clear at the top when they face Real Madrid on Sunday, while Atletico Madrid are third on 10 points after drawing 0-0 with Celta Vigo.

VALVERDE WORRIED
Barca also have the joint-worst defensive record in the league along with Real Betis, having conceded nine times in five matches.

“It’s clearly not a very good statistic for us and not in line with what we have been doing in the last few years,” said Barca coach Valverde.

“I’m worried because away from home we’re not getting good results. No wins from four away games this season is a clear symptom that we are not in a very good situation.”

Barca have enjoyed mixed fortunes at Granada’s Nuevo Los Carmenes stadium in recent years and travelled there after an uninspiring 0-0 draw in Dortmund in their Champions League group, having lost away to Athletic Bilbao and drawn at promoted Osasuna.

The Catalans clinched the title in Granada on the final day of the 2016 season but lost 1-0 there in 2014, a defeat which played a huge role in Atletico Madrid winning the league at their expense.

Granada spent the last two seasons outside Spain’s top flight and despite tickets being priced at 110 euros the stadium was full to capacity and rocking from kick-off to the final whistle, the atmosphere boosted by Azeez’s early goal.

As Granada celebrated an unlikely victory and their even more unlikely status as league leaders, Barca were left to contemplate the fact that they have failed to win any of their last seven competitive games away from the Camp Nou.

SEVILLE, March 18: Lionel Messi was lauded by opposition supporters on Sunday after he scored an outstanding hat-trick in Barcelona’s 4-1... Read More...