Govt yet to come up with official view on naturalized citizens: Minister Nayak 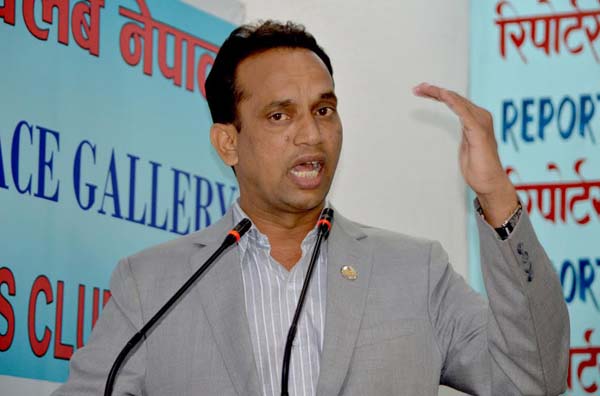 KATHMANDU, Nov 7: Minister for Law, Justice and Parliamentary Affairs, Ajaya Shankar Nayak on Monday said that the government will register the constitution amendment proposal at the parliament soon.

Speaking at an interaction at Reporters’ Club, he said that the amendment proposal will propose changes to four disputed issues—demarcation of provinces, citizenship, language and representation in National Assembly.

He added that the proposal will be registered at the parliament after forging an agreement among the major parties.

“All should work in the direction of reaching national agreement. No one should work toward foiling the environment for the accord,” he said.

Minister Nayak refuted the media reports claiming that the government is preparing to register the amendment proposal so as to allow naturalized citizens to hold key state positions as baseless.

“The government is yet to come up with an official view,” he said, adding that ruling, opposition and agitating parties are discussing the issue to reach a conclusion.

Govt taskforce yet to come up with recommendation

KATHMANDU, June 28: A task force formed by the Ministry of Finance to resolve the dispute over levying capital gains tax... Read More...

CHITWAN, Sept 9: Minister for Education Dhaniram Poudel has stated that there was fault in process of opening a new... Read More...

RAMPUR , June 24: Home Minister Shakti Bahadur Basnet has urged the parties showing discontent on some provisions of the... Read More...

Only 25% of bank's branches to be opened
49 minutes ago