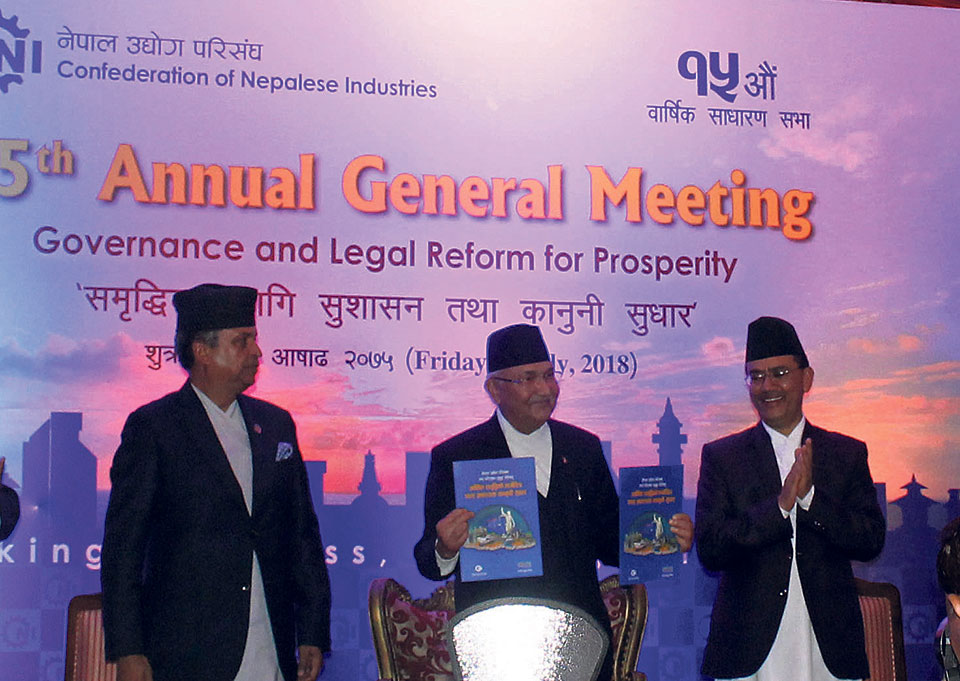 KATHMANDU, July 8: Prime Minister Khadga Prasad Oli has reaffirmed his commitment to work with the private sector for bringing economic prosperity to the country.

Addressing the opening ceremony of the 15th Annual General Meeting of the Confederation of Nepalese Industries, he said that the spirit of the privatization was not to eliminate existing government bodies while promoting the private sector.

“Though the government has taken the policy of promoting private sector, it will not follow footsteps of the previous governments who privatized Bansbari Leather Shoes Industry and the Bhrikuti Paper Industry,” he said.

Oli also clarified that the government’s motive is not to privatize industries, but to modernize and repair old equipment and machineries.

Stating that the government was ready to amend laws that are hindering industrial development in the country, the Prime Minister urged the private sector to suggest amendments needed in major laws. “We will then sit together and finalize how to proceed forward with the amendment,” he added.

Prime Minister Oli also said that as both our neighbors -- India and China -- are willing to join hands with Nepal for economic development. “We can take huge benefits from these two countries,” he added.

KATHMANDU, April 18: The Ministry of Industry is preparing to set up a Corporate Social Responsibility (CSR) fund and operationalize it... Read More...