Govt to reward each member of national cricket team with Rs 300,000 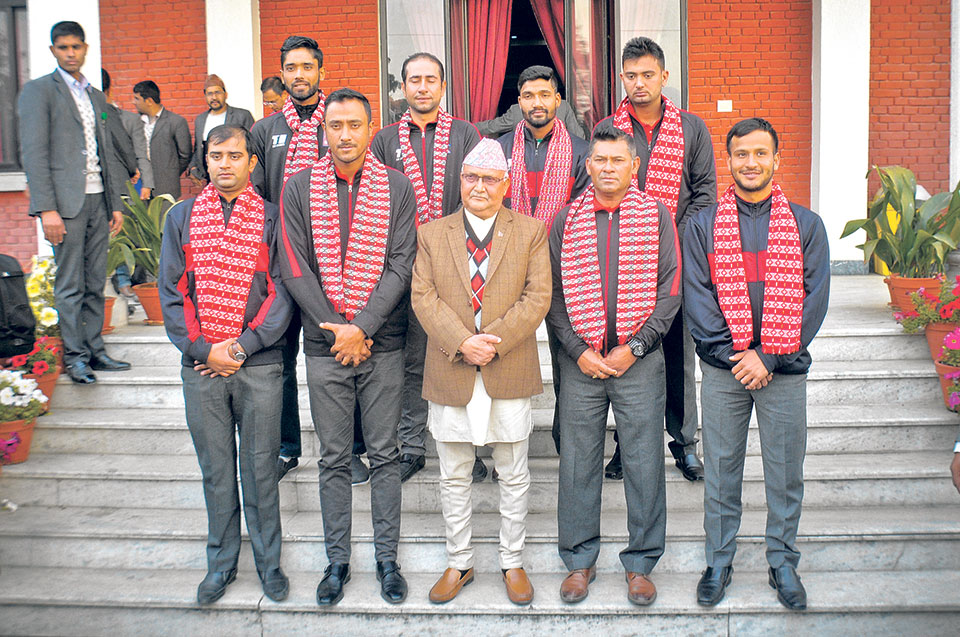 KATHMANDU, Feb 19: The government on Monday has announced to reward Rs 300,000 to each member of the national cricket team for qualifying to the 2018 Cricket World Cup Qualifier.

In the ICC World Cricket League Division Two held in Namibia from February 8 to 15, Nepal topped the six-team group to book its spot for the World Cup Qualifiers to be held in Zimbabwe from March 4 to 25.

Prime Minister KP Sharma Oli invited the national cricket team to the prime minister’s official residence at Baluwatar and applauded the team for making it to the World Cup Qualifier with their outstanding performance in the tournament.

On the same occasion, President of the Madan Bhandari Sports Academy, Binod Shrestha also announced to reward member of the team with Rs 100,000 each separately on behalf of the academy.

Nepal will play two practice matches against the United Arab Emirates (UAE) and Hong Kong on February 27 and March 1 respectively, before kicking off the tournament against the home team Zimbabwe on March 4.

The world cricket governing body International Cricket Council (ICC) has been overseeing the overall activities of Nepal’s national cricket team as the Cricket Association of Nepal (CAN) has been dissolved due to internal dispute. Despite the ICC’s continued efforts the dispute in the CAN is yet to be resolved.

During the interaction with the prime minister, national team captain Paras Khadka said that it would be of great honor to the players if the dispute is settled and the banned uplifted.

“The ICC is holding a meeting with the CAN in June. We might be banned from playing international matches if we don’t settle the dispute in next two months. More than how the national team plays in the next tournament, it is important to settle the dispute if we want to establish ourselves as a test playing nation in the long run,’’ Khadka said. “It will of greater honor for everyone concerned with the Nepali cricket, if prime minister could help resolve the CAN dispute.’’
In response, PM Oli assured the cricketers of making concrete efforts in resolving the disputes of the CAN.

“I can understand that your wishes might be that there should be a guardian organization to oversee the happenings of cricket and that organization remains above the internal disputes. I will keep on making efforts and rest assured that it will be resolved. I will also direct the ministry to focus on that,’’ Oli said. He was of the view that the cricket organization faced various problems as political parties recruited their cadres in the organization in the name of the cricket association. “These types of works won’t happen again and the person leading the association should be the one who can contribute to the sports development,” the prime minister added. “There are disputes in Olympics, there are controversies in the CAN, but now onward there won’t be disputes which will make the whole world laugh at us.” He claimed that “there will be no place for politics in sports’’ during his tenure.