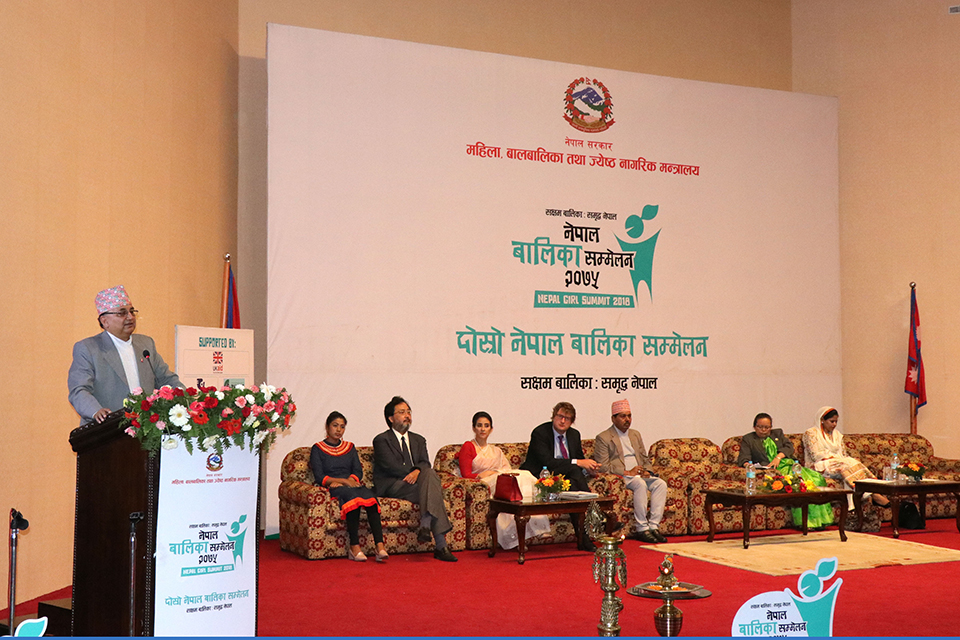 KATHMANDU, Sept 30: Acting Prime Minister Ishwar Pokharel has highlighted the need of launching social awareness and consciousness-raising campaigns for the protection of girls.

Inaugurating the 'second girls conference-2018' organized by the Ministry of Women, Children and Senior Citizen here today, the Acting Prime Minister and Defense Minister Pokharel said, " The nation has the Constitution and other laws meant for protecting girls, there also remain political commitments towards that end, but despite all these sex-selective birth is still prevalent, girls are killed within the mother's womb and social awareness is necessary to save the girls right from the womb. Though the law has determined 20 years as the legal marriage age for girls in Nepal, in practice, this age is 17 on average and this must be controlled."

Stating that the Constitution had protected the rights of girls as fundamental rights, he said the government was ready to amend the Constitution, and other laws and acts if there remained any legal complexities regarding the protection of girls.

He took the time to call on the central government and governments at province local-levels to come up with elaborative measures to curb heinous crimes against girls such as murder, violence and rape. He called on everyone in the nation to contribute from the respective sides in efforts at controlling child/early marriage, forced marriage and girls trafficking; and at building a sound and just society.

Minister for Women, Children and Senior Citizen, Tham Maya Thapa, who was also present on the occasion urged all to unite fight against violence against girls including murder and rape.

The conference received a best wishes message from British prince Harry on the occasion, in which he wished for bright future of children of Nepal.
The child protection policy in Nepal prohibits any sorts of physical torture or assaults or harassments and sexual harassment against children through the presentation of vulgar/porno pictures, by words or actions and the hiring of child workers going against the laws.

The conference kicked off with the theme of 'competent girls: prosperous Nepal' is expected to be helpful to bring a substantive plan for the protection of girls.
The first conference held two years back and its main goal was to stop child marriage. Nepal targets to end the child marriage by 2030 AD.

On the occasion, President Bidya Devi Bhandari has extended best wishes for good health and bright future of all children living at home and abroad. "Today's children should have skills in making a living by providing them with education and awareness of health. Good environment should be created for them so as to make them tomorrow's efficient parents, patriots, and self-reliant and responsible citizen," said a message of well wishes by President Bhandari.

Saying reports of criminal activities against children occurring in the society have saddened her, she in the message said, "It is our responsibility to save them from any types of crime. Perpetrator should be punished and the victims be provided with justice."
The President has also called the attention of all to initiate in helping make children-friendly laws.

Govt has failed on all fronts: NC

Government to take together constitution amendment and elections bills

KATHMANDU, Dec 27: The government has informed the federal alliance which also includes the United Democratic Madhesi Front that it... Read More...