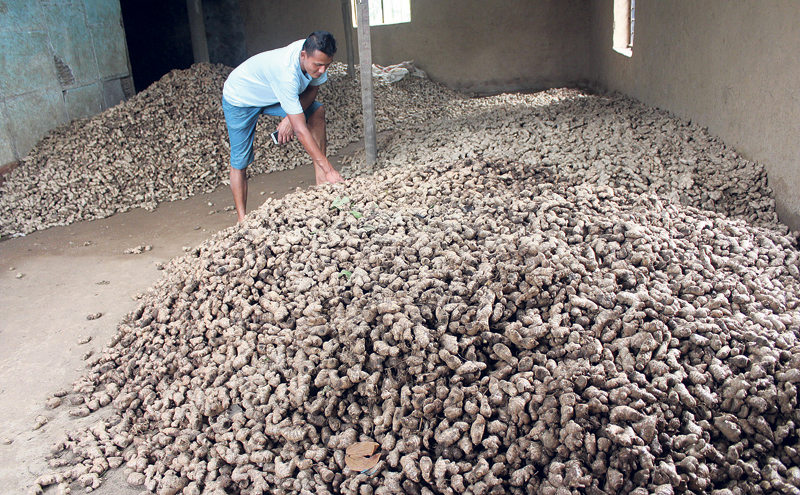 KATHMANDU, Sept 7: A week after India put a ban on import of Nepali ginger, Ministry of Agriculture Development (MoAD) has stepped up to ensure that Nepali ginger meet all the quality standards.

The ministry, on Tuesday, decided to monitor issuance of Certificate of Origin (CoO) and ginger export process, and immediately conduct lab test of ginger samples.

As per the new provision, traders have to collect recommendation letter from the concerned District Agricultural Development Office (DADO) before applying for CoO at local units of Federation of Nepalese Chambers of Commerce and Industry (FNCCI).

CoO is a document that helps to attest the origin of goods. The government has authorized local units of FNCCI to distribute CoO.

A meeting led by MoAD Secretary Uttam Kumar Bhattarai also decided to suspend authority of FNCCI’s local units to issue CoO if product certified by them is found to be substandard. “Traders involved in export of substandard products will be charged as per the existing black-marketing law,” Yogendra Karki, spokesperson of MoAD, said.

It is said that Indian authorities slapped a ban on import of Nepali ginger, citing high ‘aldicarb’ residue and also on charge that Chinese ginger was being exported as Nepali product.

Karki said that the meeting, which also saw participation of FNCCI representatives, decided to collect sample of ginger from customs point and conduct lab test at the earliest. Plant Protection Directorate, a government agency, has been instructed to test samples and give reports about pesticide residue.

Coming out of the meeting, Pradeep Maharjan, CEO of Agro Enterprise Center under FNCCI, said they would make public their stance on the ministry’s decision on Wednesday.

MoAD officials contend that pesticide is rarely used in ginger production as farming is done in terraced fields in the mid-hills.

Meanwhile, the ministry has formed a six-member team led by Senior Agriculture Economist Pradhyumna Raj Pandey to take stock of the current problem in ginger export to India and come up with necessary suggestions to the government. The team comprises of representatives from the Department of Food Technology and Quality Control and Plant Protection Directorate, among others. The team will start it work from Wednesday, Karki added.

The meeting also decided to raise the ‘ginger export’ issue in the meeting of Nepal-India Joint Agriculture Working Group which kicks off in New Delhi on Thursday.

BUTWAL, July 14: Minister for Agriculture, Land and Cooperatives Chakrapani Khanal has said that the government is making preparations to... Read More...

KATHMANDU, Nov 18: The government  has decided to take further steps to solve the problem of malnutrition in the country. ... Read More...

Karan Chaudhary announces his candidacy for NADA president
20 hours ago