Govt’s policies and programs like an imagination of a multi-year plan: Deuba 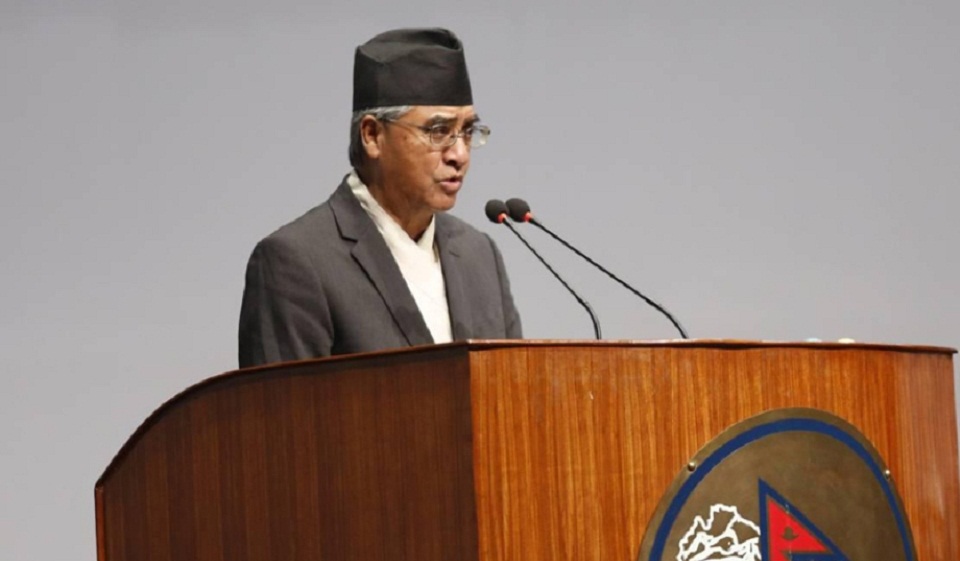 KATHMANDU, May 17: Parliamentary Party leader of the main opposition Nepali Congress, Sher Bahadur Deuba has said that the government’s policies and programs for the upcoming fiscal year lack proper assessment on the damages to be caused by COVID-19.

In his remarks delivered in today’s House of Representatives meeting on the government policies and programs for the fiscal year 2020/21, Deuba accused the government of not being sincere to the sufferings of the citizens. “The government has no plan to assure the people of the future in the time of this crisis. The policies and programmes for a year are derailed from their objective and seem like a mere imagination of a multi-year plan,” Deuba said.

On the occasion, Deuba recalled the contribution of frontline health workers, security personnel, media persons and cleaners working during the time of this pandemic.

“I have remembered the patients of other diseases who are facing hardships in getting treatment; small and large industrialists whose industries and trade have been closed; labourers facing difficulties to manage their meals; poor; physically challenged people and single women,” Deuba said in his speech. The former prime minister also said that he has remembered the woman from Sindhupalchowk, who died of COVID-19 on Thursday, her infant and her family.

Accusing the government of failing to make enough preparations for the prevention and control of the pandemic, the main opposition leader expressed his concern over what he said the lack of guarantee of personal protection equipment (PPE) for health workers, lack of reliable testing kits, short supply of medical equipment to hospitals, a limited facility of ventilators, no plan of rescuing those Nepalis left stranded along the border areas and bringing them home safely.

'' I want to question the government that what preparations did it make during the lockdown?''

He demanded the government make sure the availability of sufficient quantity of medical stuffs, extend the PCR testing coverage and reach it to the community level, come up with relief packages targeting several sectors, make arrangements for bringing those Nepalis in difficulty in abroad to home safely and putting them in quarantine before sending them to their homes.

He said the COVID-19 crisis had its adverse impact on all sectors in the country and it was sure to leave short and long-term consequences, but the policies and programmes were not intended at finding solutions to such problems. ''The government lacks willpower, efficiency, honesty and far-sighted vision to deal with the multidimensional outcomes of the COVID-19 crisis.''

He accused the government of failing to predict the preliminary losses caused by coronavirus to industries and remittance. The leader claimed the policies and programs were unsuccessful in encouraging the industries deserving relief assistance. As he said, the government has no reliable and new plans to promote export.

Underlining the need for sitting for meaningful and productive talks with neighbouring countries to find a solution to the border dispute issues, he urged the government to proceed toward the presentation of the MCC in parliament.