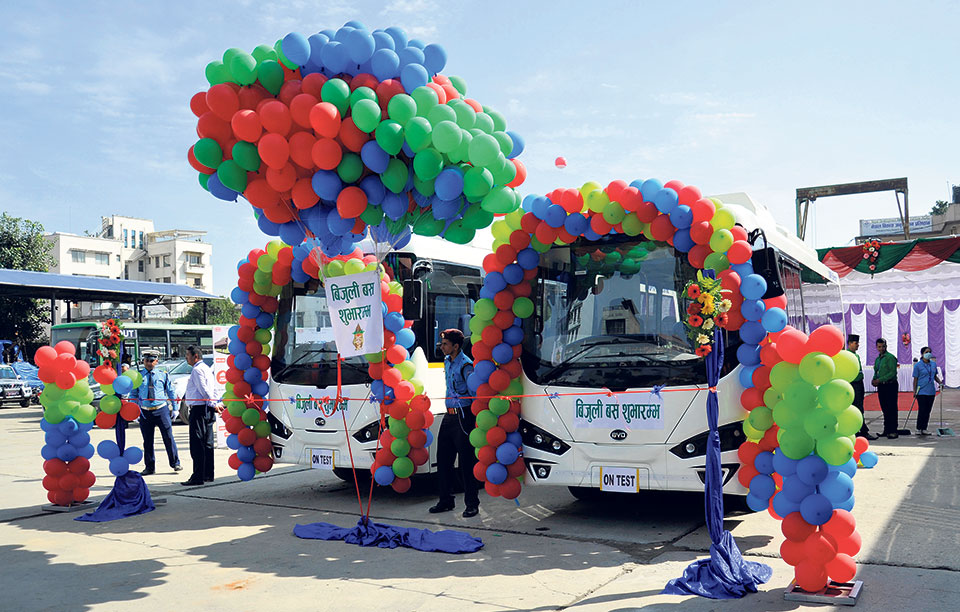 KATHMANDU, June 20: On December 24 last year, the council of ministers had decided to buy 300 electric buses to be run in the Kathmandu Valley. Five months later, there is no sign that the decision will be implemented.

The government had taken this decision to lessen air pollution in the valley. However, the government is still not clear about a modality for purchasing the buses.

A team under the leadership of Shiva Prasad Nepal, joint secretary at the Ministry of Physical Infrastructure and Transport, had submitted a study report for buying the buses. However, no action has been taken yet.

Spokesperson of the ministry, Rajeshwar Gyawali, said that the report submitted by the committee is still being discussed. He said the ministry will move ahead on buying buses after going through the report.

It has not been decided whether the buses will be bought under a government-to-government deal or through tender. “As we are going to buy electric buses for the first time, we have to do the planning properly,” he says.

Secretary of the ministry, Devendra Karki, said that as he had taken the responsibility of the ministry only recently, he was still studying the matter. "We will discuss it in detail, and decide on buying the buses soon," he said.

CHARGING STATION TO BE OPENED IN 10 PLACES

For the promotion of electric vehicles, Nepal Electricity Authority has decided to establish 10 charging station in the valley. The authority has decided to open the stations within six months, at a cost of Rs 150 million. Each charging center will have three charging points and parking space for 50 vehicles. The station to charge all kind of electric vehicles found in Nepal is going to be constructed.

The ministry is working on a draft of Public Transport Authority Act. Gyawali said that as soon as the act comes into force, the decision to buy electric buses will be materialized.

On December 24, a meeting of the council of ministers had decided to form a Public Transport Authority.

However, experts are not upbeat that the formation of a transport authority will each public transportation in the country.

"Until the mess in public transportation ends, the people will not be able to travel smoothly," said Ashish Gajurel, a traffic engineer. “It is not just about creating an authority. Transportation system in Nepal is to be drastically improved,” he said.

​Dr Govinda KC’s fast-unto-death, his 16th, reaches ninth day on Thursday and his health condition is deteriorating. His pneumonia in... Read More...