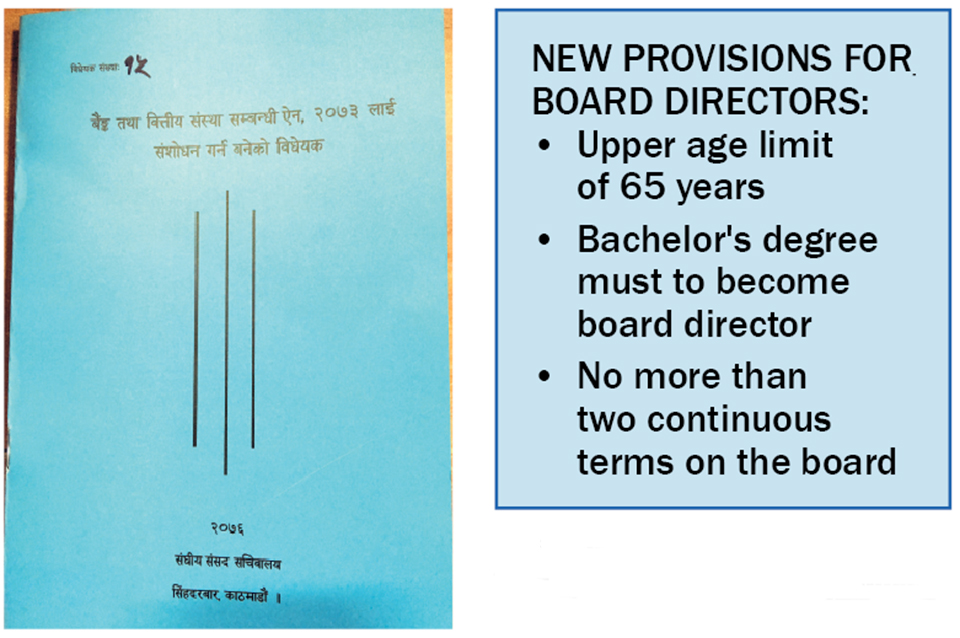 KATHMANDU, Sept 14: Board directors in bank and financial institutions (BFIs) will not be allowed to get appointed, elected or nominated for more than two continuous terms if the new bill to amend the Bank and Financial Institution Act, 2017 (BAFIA) tabled in the parliament is endorsed.

While the existing BAFIA which was enacted in 2017 sets the maximum term for chief executive officers (CEOs) of BFIs, there was not any limit on the terms for the board directors. The BAFIA has a provision whereby a CEO of bank of financial institution can get reappointed for only one term.

However, a proposed provision in the draft bill of the BAFIA earlier by Nepal Rastra Bank (NRB) was removed from when it was endorsed from the parliament. According to a source at the NRB, the provision setting the term limit even for board directors got scrapped at the behest of some members of the parliament who were also either promoters or board directors in various BFIs.

However, the government has reintroduced the term limit for board directors along with some other provisions in the new bill to amend the BAFIA, 2017 in less than two years.

“The existing provision has been amended to fix the terms of board directors to two times continuously, keeping in view corporate governance,” read the reason stated by the government in amendment draft.

However, the new amendment will not restrict any board director to get appointed or elected in a bank and financial institution after a gap of four years after serving two consecutive terms.

The professional board director will be appointed for only one term.

Apart from the number of terms, the government has also tightened the eligibility to get nominated or appointed in the board.

According to the proposed provision, a board director must have a bachelor's degree in the related subject to be eligible for the post, in addition to work experience of five years in any BFI as director or officer in the government. Earlier, academic degree was not mandatory if a person had a work experience of five years as a director or office bearer of a foreign or local BFI or of corporate body of related sector or in officer level of the government.

Similarly, the government has also set an upper age limit of 65 years for any person to become board director along with the minimum age requirement of 25 years. Earlier, there was no age ceiling for nomination or appointment as the board director in a BFI.

The bill tabled in the parliament earlier this week will be moved forward for the deliberations and discussions for the members of the parliament before getting endorsed.

KATHMANDU, July 15: The average base interest rate of the bank and financial institutions (BFIs) has gone down to the lowest... Read More...