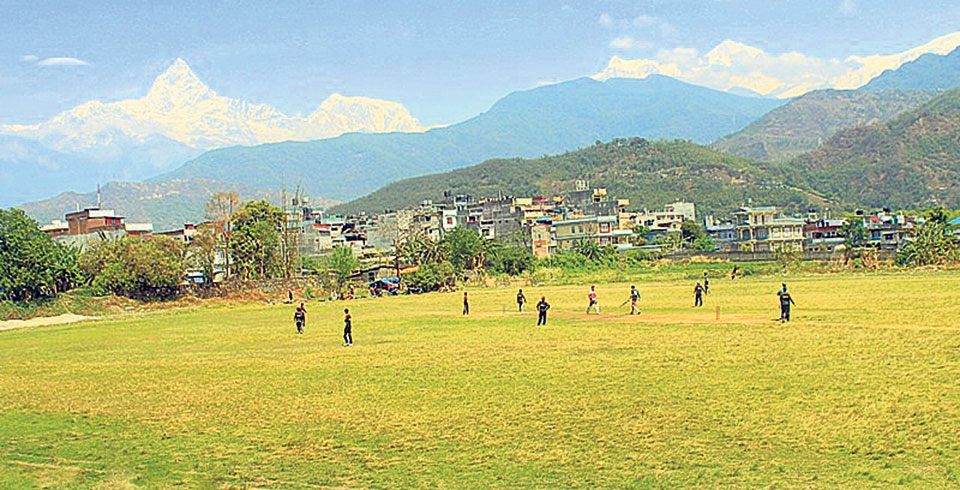 KATHMANDU, Nov 7: People were in awe when Karan KC delivered one of the most brilliant displays of fast bowling in recent memory against Hong Kong last month. His immaculate line and length went on to remove the most successful batsman of ICC World Cricket League Championship (WCLC) and Middlesex alumni Anshuman Rath. Karan is also the member of the inaugural winning team of Everest Premier League (EPL) Panchakanya Tez.

The future is bright for one of the most promising players in national colors but the circumstances are getting gloomy over the cricket of his home-town Pokhara where he first traded his skills to steal the limelight to get selected for the national team.

The Urban Development Training Center’s (UDTC) ground located at the heart of Pokhara City is on the verge of being dismantled due to some recent development related to upcoming provincial and federal elections. Local authorities have marked the UDTC ground as an ideal place for construction of government quarters for the chief minister or the governor of Province 4.

“This (UDTC) is on top priority due to its proximity. It is one of the preferred existing infrastructures for the purpose of building staff quarters, training halls, canteen, hostels, etc inside the premises,” said a reliable source at Pokhara-Lekhnath Municipality.

On further inquiry by Republica, officials at District Administration Office also admitted that the ground is likely to be selected as the prime option for establishing the quarters of the chief minister immediately after the elections.

The current national prodigy Karan KC was first discovered at this ground. The ground was recently used to host Pokhara’s first premier cricket event Macchapuchre Cricket League (MCL). The ground was also used to host women’s national competitions and U-19 nationals in the past. It also hosted tournaments for blind cricketers in the past. The blind cricketer team is set to feature in the World Cup for blind next month.

For years, it has been an ideal center for players and teams from Syangja, Tanhaun, Baglung, Myagdi and other neighboring districts to learn and craft their skills. The only other ground in Pokhara belongs to the Rangashala, where the controversy is rife over ownership between region’s sports and cricket associations.

Karan KC recently started a cricket academy at UDTC. “Previously, I used the ground for my practice and recently decided to start a cricket academy on that ground. I have spent a lot of time and effort on it, and I have lots of hope from it. The academy is running quite well and more students are enrolling,” said the fast bowling all-rounder. There were more plans on the horizon for developing a top-level academy with indoor facilities to cope with frequent rains of Pokhara.

“My idea was to commercialize the place with new concepts of indoor cricket, but after everything we did for the maintenance of the ground and setting up of the place, I am really disappointed. In fact, I am tensed that the ground will be taken away for construction of a government structure,” he added.

The UDTC ground was first used by Kaski region number 4 for selection camps and tournaments. Kaski used to pay RS 16,000 per year for using it back in 2006. Any private club could use the ground by paying rents ranging from Rs 500 to 1000 per day. It was then Deepesh Khatri, the former age-level international player of Nepal, decided to use the ground professionally using the experiences he had with Blackheath Club in Kent, UK.

“When I first came from the UK, I requested Kaski district cricket association to get the ground exclusively for cricketing purpose so that we could run the academy and schedule matches here. But they stayed away from investing. They made an excuse for not having a calendar. And this was a statement of the association’s president,” said Deepesh Khatri, captain of Pokhara region cricket team.

Mostly used as a football pitch, rather recklessly, the ground was re-constructed and re-shaped for cricket by a group led by Deepesh Khatri back in 2010. Khatri and other local players co-invested to upgrade the ground to make it playable and leased the ground for Rs 40,000 per year.

Soon afterwards, Region number 8, which was formed parting its ways from Region number 4, also desired to get the UDTC ground. The ground was conserved by Deepesh-led club paying the annual lease and making necessary investments to keep the ground in condition.

Macchapuchre Cricket Club (MCC) run by Deepesh Khatri, which was recognized by Nepal Sports Council in 2011, got the ground back on lease but this time they had to pay an increased fee of Rs 150,000.

While players have been working hard to upgrade the ground and institutionalize cricket at the local levels, political parties have eyed the same ground to build luxurious quarters.

Though most of the political parties have highlighted the importance of sports in their election manifestos, in practice they are trying to ruin an important ground available in the town, lamented local players.

The director and information officer of Local Development Training Academy (LDTA), Krishna Chandra Dhakal, said that they would act based on government’s decision. “We don’t have any mandatory policy as such to follow in connection of allowing the ground on lease. There is no law in that regard. Whatever the cabinet decides, will be obeyed,” Dhakal said.

Karan KC was dejected by the recent developments. He said he was doing everything possible to save his dream of building a cricket academy and giving a platform to young cricketers of Pokhara.
“Imagine giving everything to something, just to see it taken away from you. Maybe having your people in the government could have helped but I don’t have it either. I can’t fight with the government.”

The political parties are set to participate in the elections. They seek votes showing their manifestos that include sports development as one of their priority areas. It would be an irony for the same parties to finish off a promising cricket ground to build quarters for their leaders. That too, without giving any alternative.

KATHMANDU, April 30: The government has set a plan of endorsing the constitution amendment bill today from the parliament and... Read More...