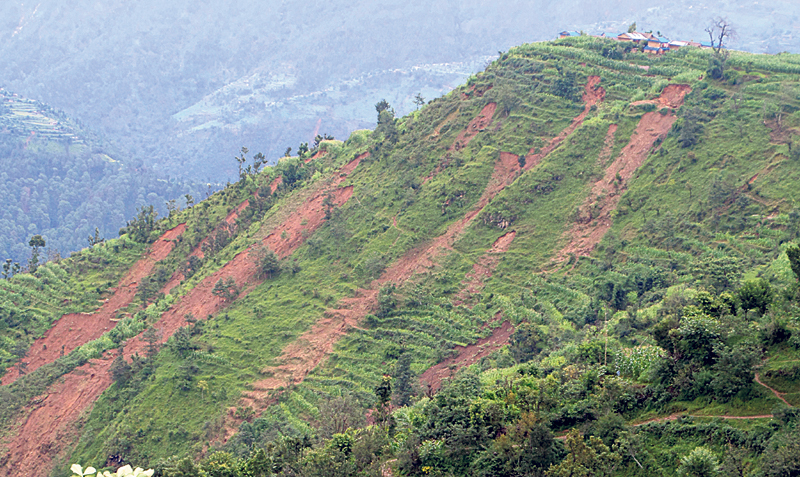 NRA blames MoF for delay
KATHMANDU, Oct 26: Relocation of landslide-prone settlements in the earthquake-hit districts to safer sites was one of the key issues besides reconstruction of the damaged houses following the devastating earthquake in April last year. But over 18 months have elapsed since the disaster and the issue of relocation of the risky settlements has been completely neglected by the government.

The National Reconstruction Authority (NRA), the body responsible for the relocation task, has virtually done nothing remarkable to shift the risky settlements to safer places.

Not a single risky settlement in the quake-hit districts has been relocated so far.

“We are just in the beginning phase of the relocation of the risky settlements. No progress has been made on the matter,” NRA Spokesperson Ram Prasad Thapaliya admitted.

Two months ago, a team of geologists led by Geologist Tara Nidhi Bhattarai, an expert with the direction committee of NRA, had carried out a month-long survey in 117 settlements in nine quake-hit districts identified by the Department of Mines and Geology as vulnerable after the earthquakes. Following the study, the team submitted a report concluding that as many as 57 settlements are at high risk of landslides and even earthquakes and asked the NRA to immediately relocate them.

But even as of now, the NRA has not taken any initiative to relocate them while the report is gathering dust at the NRA office.

“The team identified risky settlements but we have not been able to do anything as we are yet to identify safe places for relocating them,” said Thapaliya.

He said that the NRA is yet to carry out survey for identifying safe places where risky settlements can be relocated.

However, the 57 settlements are not the ones under risk. The Home Ministry had identified a total of 475 risky settlements in the aftermath of last year's earthquakes.

NRA's member Chandra Bahadur Shrestha, who oversees the task of relocation of risky settlements, had earlier told Republica that as the ministry had carried out the survey in haste and was not very scientific, a new detailed survey needs to be carried out to ensure whether the risky settlements need to be relocated or not. But even as of now, the NRA is yet to carry out the survey.

He said that the NRA is making preparations to carry out the survey in 358 settlements in the 17 quake-hit districts in the hills with the support of the Department for International Development (DEFID) and finalize how many of them are risky and need relocation. He, however, could not say from when the survey will begin.

KATHMANDU, Jan 11: Families living in risky areas in the earthquake-hit districts have been increasingly seeking collective relocation, thanks to the... Read More...