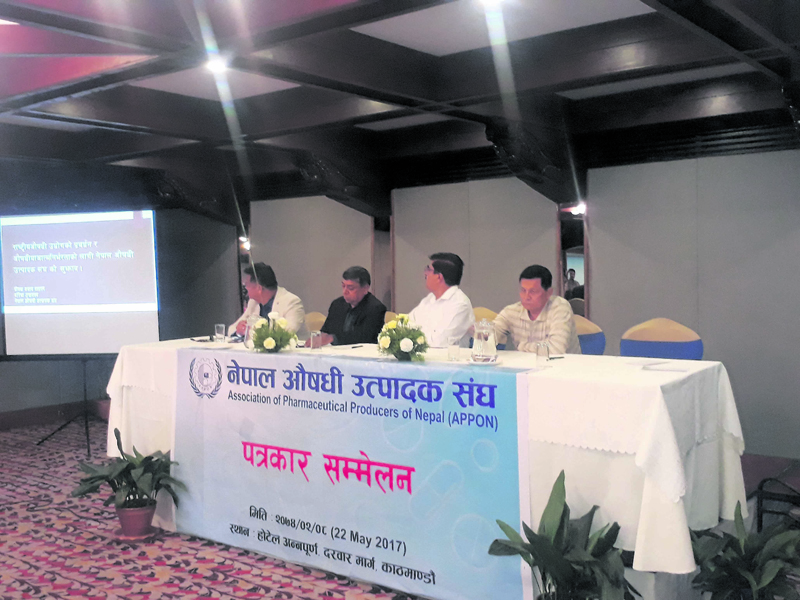 KATHMANDU, May 23: Nepa li pharmaceutical companies have said that they were capable of meeting the demand for medicines in the market.

They, however, added that they won't be able to operate to their full capacity unless they get support from the government, officials of Association of Pharmaceutical Producers of Nepal (APPON) said at a press meet in Kathmandu on Monday.

They also said that the Nepali pharmaceutical companies can substitute imports worth Rs 20 billion annually if they get needful support and incentives from the government.

Speaking at the event, Deepak Prasad Dahal, the senior vice-president of APPON, said the Nepali companies have been able to meet only 46 percent of the total demand in the market. “The country meets around 53 percent of its total demand for medicines through imports from India. To become self-sufficient, the government needs to provide different subsidies to local drug makers,” he said, adding that the Indian government provides 35 types of subsidies to drug makers. “The decision helped the Indian pharmaceutical industry to grow rapidly. India exported pharmaceutical products worth $ 11.36 billion and $ 12.54 billion in 2014 and 2015, respectively.”

He further added that the pharmaceutical industry of Bangladesh is also flourishing with the support of its government. “Bangladesh currently exports pharmaceutical products to more than 120 countries. Around 97 percent of its domestic demand is met by local productions,” he added.

According to APPON, Nepal drug makers are providing direct employment to around 15,000 and indirectly to more than 200,000. The annual turnover of Nepali drug companies is only around Rs 16 billion.

Speaking at the press meet, Krishna Adhikari, a vice president of CNI, said that the country is suffering trade deficit of more than Rs 800 billion every year. “The contribution of pharmaceutical sector to the country's Gross Domestic Product (GDP) is only 5 percent. Pharmaceutical self-sufficiency is possible if the sector gets needful support and cooperation from the government,” added Adhikari.

Substation at Nawalpur comes online, electricity supply expected to be reliable
32 minutes ago

Motorcyclist killed after collision with cargo truck
4 hours ago