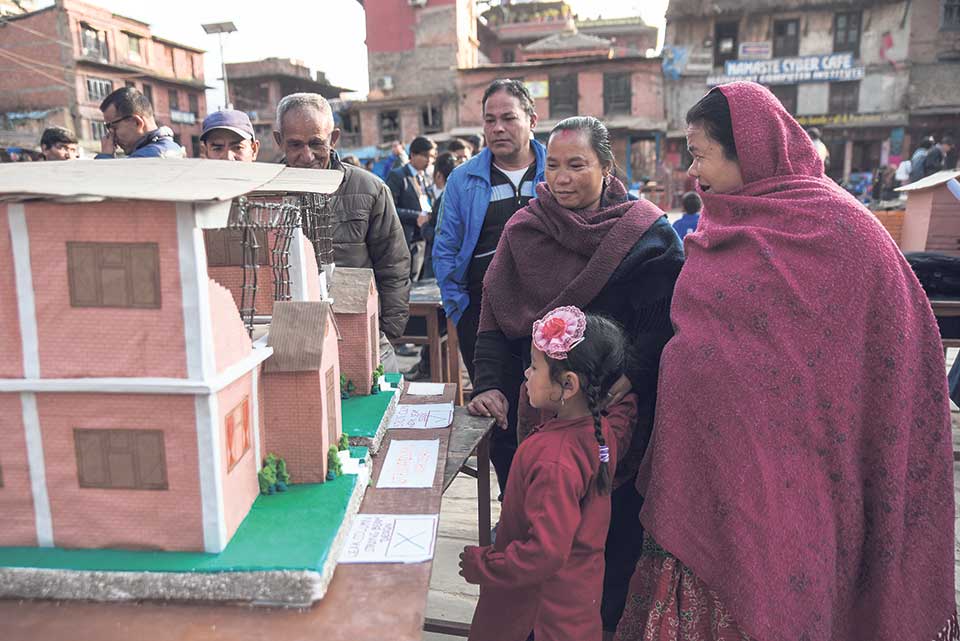 People look at house designs put on display to raise awareness about earthquake resilient housing at Taumadhi in Bhaktapur on Tuesday on the occasion of 20th Earthquake Safety Day. Photo: Dipendra Rokka/Republica

KATHMANDU, Jan 17: As the country marked the 20th earthquake safety day on Tuesday, Nepal has achieved a lot already in terms of raising awareness about earthquake safety and preparedness, especially after the devastating 2015 earthquakes, but there is still a long way to go in preparation for a potential earthquake disaster, say experts.

Khadga Sen Oli, a disaster expert associated with National Society for Earthquake Technology (NSET), believes that the 2015 earthquake came as a turning point in terms of earthquake preparedness in the country.

“Before the 2015 earthquake, the discourse mainly focused on why we should prepare for earthquake. The government and organizations mainly stressed on raising awareness. But after the disaster, the discourse changed. Now the focus is on how can earthquake risk be minimized,” Oli said.

In 2015, as majority of people died in building collapses, people have started making efforts to construct earthquake-resilient buildings, according to officials at the Department of Urban Development and Building Construction, which is responsible for the implementation of the building code in all the local bodies in the country.

The government marked the day with the theme “Empowering communities and local government: Strong foundation of earthquake safety” with various activities and functions across the country. The day is observed every year on Magh 2 as per the Bikram Sambat calendar to mark the great earthquake of Nepal in 1934 AD, which had killed around 8,000 people. Prime Minister Sher Bahadur Deuba, attending a function organized to mark the day in the captial, also vowed to further empower local governments and communities for building an earthquake-resilient country.

After the disaster, experts view that there has been a remarkable improvement in the enforcement of the national building code as well as emergency response preparedness from the government side.

“Earlier, despite various regulations imposed by the government for implementation of the building code, the code was not strictly implemented. But after the disaster, many people themselves started following the code voluntarily for safe building construction, which is noteworthy,” Oli said.

Similarly, after the 2015 disaster, security agencies also further strengthened their disaster management units with various trainings to their officials for emergency response in the wake of the disaster like the 2015 earthquakes. Nepal Army, Armed Police Force and Nepal Police expanded the size of their disaster units and introduced various trainings as well as equipped them with new technologies for effective rescue and relief in the face of potential disaster.

Govt to assess safety of Nepalis working in Afghanistan

The government is sending a Nepal Airlines plane to Kabul to bring back the bodies of Nepali citizens who died... Read More...