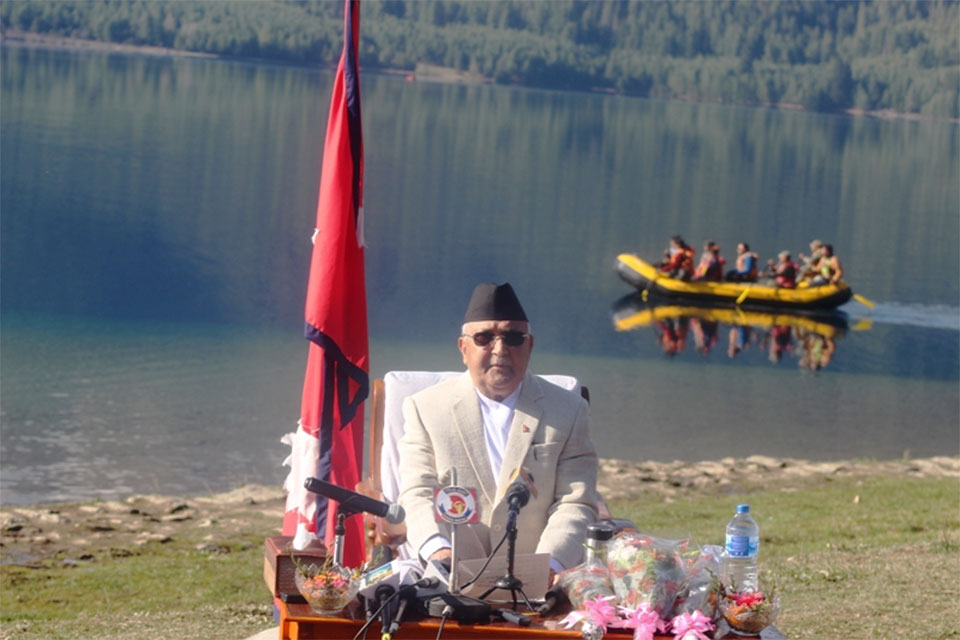 Addressing to the nation from the banks of the largest and mesmerizing Rara lake this morning, , Mugu on Nepali New Year, PM Oli stressed that the government focused on avoiding unemployment and make access to minimum facilities like transportation, electricity, drinking water etc. PM Oli stressed that the government will launch the national campaign for the free immigrants' nations.

He said, "The incumbent government would come forward in a ruthless and non-compromising manner against corruption and that necessary laws and structural reformation will be made for it."  PM Oli further stated that corruption eradicates social values and beliefs towards democracy.

PM Oli spoke of an unprecedented opportunity at hand to herald economic development and prosperity in the country.

" Following the success of the elections, our country Nepal has been able to establish a new standard in the democratic exercise," PM Oli said and added further "The history has provided us with an unprecedented opportunity for economic development and prosperity; we had problems before us and a duty to resolve them. The people have given us the mandate to address those problems."

Stating that the year 2074 stood out as an important year for political achievement, the PM noted that the country received pro-people, democratic, patriotic, progressive and pro-development government with the end of political transition last year.

"Nepal will be built and it should be built. Yes, there is a term and period for everything. There is a limitation on a man's knowledge and capability. But there are no limits for honesty and no set term for faith. There is no need for alternate training for anyone to work with sincerity and dedication," PM Oli insisted.

PM also pointed out that feudalism responsible for Nepal's backwardness has become a history, views aimed at making others dependent subjects have weakened and that divisive forces have been sidelined.

The PM stressed further that a country does not become big or small compared to other countries on basis of shape, demography and economy rather it is based on the subject of sovereignty. He also underlined the determination to develop close relations with the neighbouring countries, friendly nations and the international community by keeping the national interest at the centre stage.

PM Oli left for Mugu from Kathmandu on Friday and visited Dhorpatan Hunting Reserve in Baglung before arriving in Dolpa in the evening.

The cabinet meeting of Karnali Province on March 10 decided to observe the Nepali New Year as Rara-Karnali Visit Year-2075.

The Karnali province government has requested all domestic and international tourists to visit Rara once in a lifetime to experience natural beauties of Karnali.

The government believed that the campaign will help foster the lifestyle of citizens of Karnali region.

Chief Minister of the Province Mahendra Bahadur Shahi handed the decisions of the cabinet of Karnali Provice to PM Oli on Friday. The cabinet decision was handed to PM Oli, seeking financial support for the holistic development of the Province.