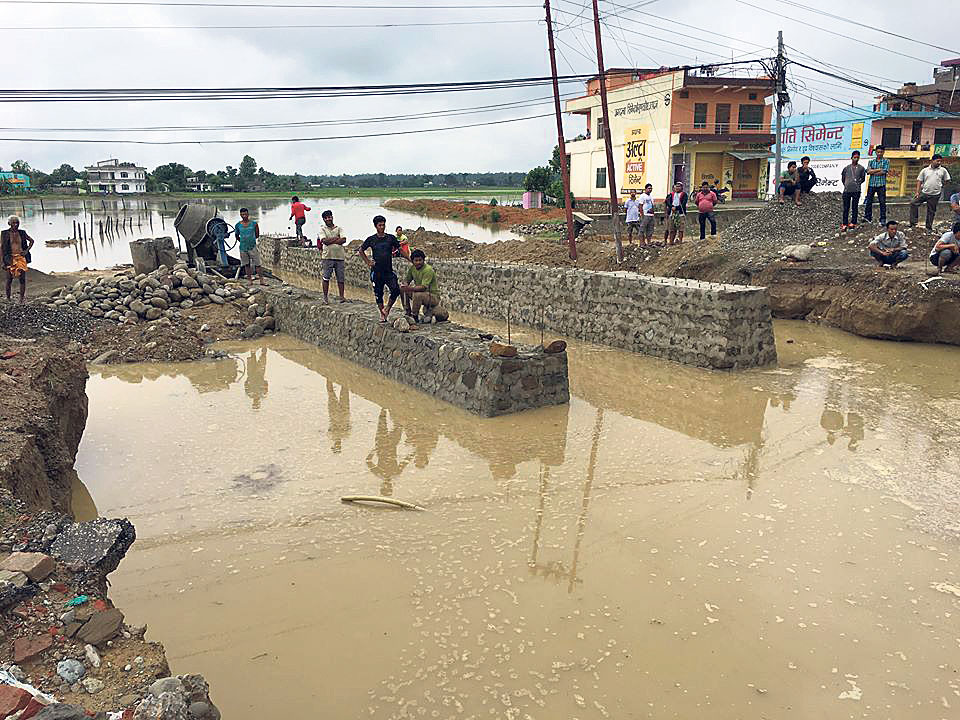 A waterlogged section of the six-lane Mohana-Attariya road cased by the recent incessant rainfall. Photo: Republica

The capital of Province 7, Dhangadhi, got cut off from the rest of the country after the rainfall damaged the road section near Attariya gate, which is the main road link to the southern parts in the region from the East-West Highway.

Commuters and drivers had to go through hours of ordeal due to the obstruction.

While hume pipes were installed shortly thereafter as a temporary measure to bring the road into operation, there were traffic snarls for four more days in the road section.

Referring to the road obstruction, Dev Raj Joshi of Kailali Majgau wrote on his Facebook – “If the government had prioritized blacktopping the two-lane alternative route Dhangadhi-Khutiya road section before starting the construction of the six-lane Attariya-Mohana road, it would not have affected the general public regardless of the delay in completion of the six-lane road project.”

According to him, the alternative two-lane Khutiya-Dhangadhi road section gave a lifeline to the provincial capital during such crisis. “What can we say to the leaders and politicians who don’t make alternative plans?” he said.

Not just Joshi, most of the commuters travelling along Dhangadhi-Attariya road section have voiced their concern that the construction of the six-lane project should go ahead only after ensuring smooth operation of the alternative road.

“Commuters coming to the provincial capital are forced to go through unbearable dust in the road during sunny days. When it rains, the road is full of mud and potholes,” said Laxmiram Acharya, chairman of Kailali-chapter of Rastriya Janamorcha.

“It is a shame not just for Dhangadhi, but for the government itself,” Acharya added.

Acharya further said that progress of the road construction is painfully slow. “Thousand of vehicles ply the road every day. If they sensed that operation of vehicles is hindering their progress, they should have definitely looked for alternative route before initiating the construction.”

According to him, upgrading the alternative route would have given some respite to the commuters.

Mayor of Dhangadhi Sub-metropolis Nirpa Bahadur Odd acknowledged the problems faced by the commuters. In his defense, he said, “We had suggested the government to first upgrade the alternative route before working on the six-lane road section. But they did not listen to us.”

The mayor said that the provincial government should be pressurized to upgrade Dhangadhi-Khutiya fast track even after the end of the fiscal year. “If the government feels pressure from all sides, it would certainly take steps to upgrade the fast track. Policy makers failed on this front, contributing to the delay in the six-lane road,” he said.

According to him, they then allocated the Shauley-Dipayal road to the central government and reclaimed Dhangadhi-Khutiya for the local government. “Only then the provincial government stated taking interest in upgrading the alternative road.”

A budget of Rs 6.5 million has now been allocated for Khutiya-Dhangadhi road.

Manish Kumar Sah, chief of Mohana-Attariya road project, said that it is normal for the road to be muddy and dusty.

“Last week’s rainfall indeed caused problem to the under-construction road. We then laid hume pipes to ease the situation and solve the problem,” he said.

Project Chief Sah further said they cannot go beyond the agreed terms and condition of the contract to upgrade the alternative route.

“Perhaps we could have done something about the alternative route if it was mentioned in our contract. But as the contract does not mention it, we cannot do anything.”

According to him, it is now up to the provincial and local governments to think about the alternative route.

The agreement for the six-lane Mohana-Attariya road was signed on May 2017 for a budget of Rs 1.68 billion. Under the agreement, the contractor needs to complete the construction within two years from the day of the contract.

Stating that the remaining 75 percent of the work would take time to complete if the work continues in the same sluggish pace, locals have been demanding the government for upgrading the alternative route.