PM's address to the nation from Rara 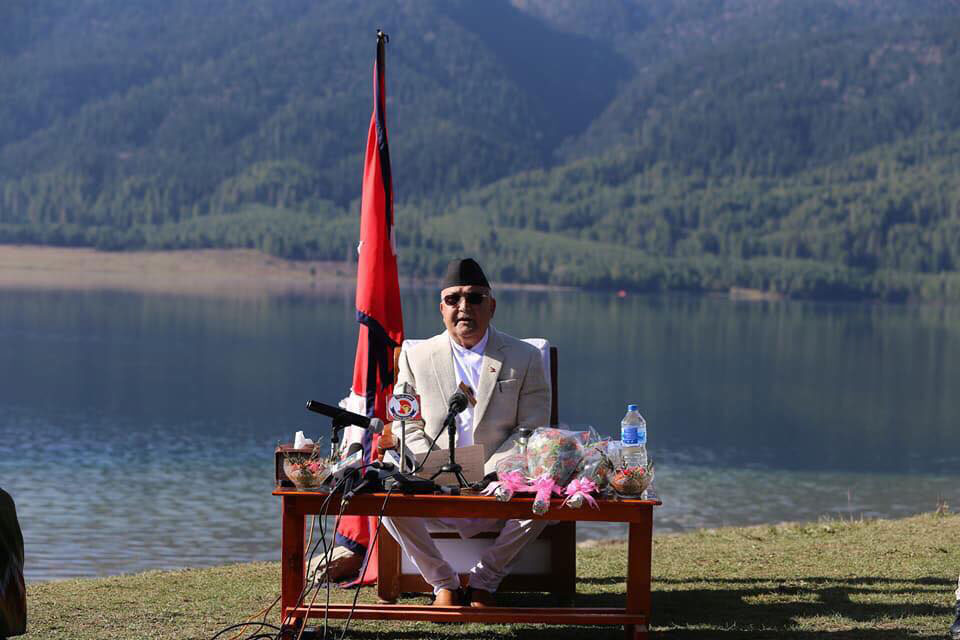 MUGU, April 15: Addressing the nation from the shores of Rara Lake of remote Mugu district on the first day of the Nepali New Year 2075 BS, Prime Minister KP Sharma Oli ON Saturday expressed the government's commitment to making the nation prosperous.

Prime Minister Oli also vowed to put the backward Karnali Province on board the country's development process and urged for support from all stakeholders and public to achieve the government's goal. His speech mainly focused on the commercialization of agriculture, access to education and health for all, promotion of tourism and herbal products and ending discriminatory social traditions in Karnali and across the country.

“No country in the world has become developed because it was rich; countries have become rich because they developed,” said Oli stressing the need for accelerating infrastructure development in the country. He promised to end bureaucratic and legal hurdles to domestic and foreign investors and said investors will profit if they invest in Nepal.

Prime Minister Oli said that education, health, tourism and development of physical infrastructures are on the priority of the government. Announcing to come up with strict legal measures to combat corruption, Oli said the government will not tolerate the corrupt.

He assured free health services to citizens below the poverty line, children and elderly people. Stating that people are deprived of medicines in herbs-rich Karnali, Oli vowed to end the situation soon and support the processing of medicinal herbs. He also announced to launch a national campaign for providing access to basic health, education, nutrition, drinking water services and electricity and ending unemployment.

Stressing the need for practical education, Oli promised to end the situation of children being deprived of education due to poverty. He said that the government has adopted a policy to change the curriculum focusing on employment and practical education.

Highlighting the scope of tourism as the foundation for development and prosperity of the country, Oli mentioned that infrastructures will be built in the tourist areas and the major tourist destinations will be promoted.

Pledging to transform the country into an agriculturally independent country, Oil said people's dependency on agriculture will be reduced to 25 percent from two thirds within the next five years.

Stating that his signature vision of 'Prosperous Nepal and Happy Nepalis' will be achieved only if the Karnali Province is developed, he appealed to everyone to end social taboos prevalent in the region.  “The government will effectively eliminate all sorts of gender-based discriminations and polygamy, bar child marriage, and end racial discrimination of any form,” said Oli.

KATHMANDU, June 15: Prime Minister KP Sharma Oli has urged all to move ahead on the way to prosperity as... Read More...