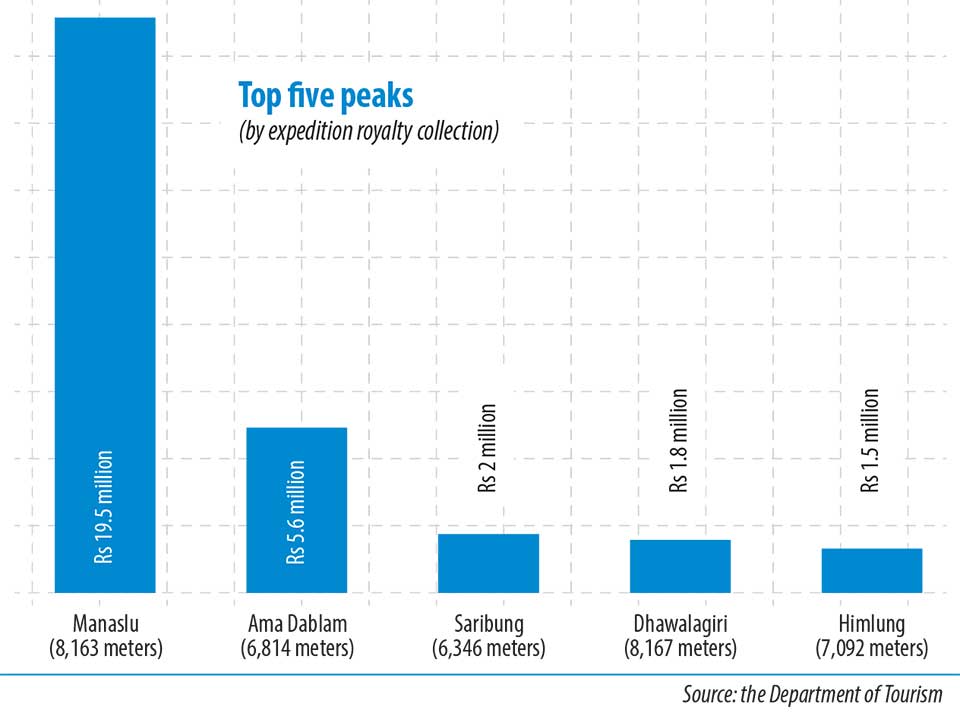 Manaslu the most climbed peak this autumn

KATHMANDU, Oct 27: The government has collected Rs 37 million in royalties from mountaineering expeditions in the autumn season of 2018, from 43 different peaks above 6000 meters.

As per data collected by the Department of Tourism (DoT) under the Ministry of Culture, Tourism and Civil Aviation (MoCTCA), a total of 844 members from 111 teams got expedition permits for the season.

Mount Manaslu (8163m) has been the peak for which the highest number of permits were issued, according to the DoT. A total of 192 members from 18 teams received expedition permit for the peak. Accordingly, Mt Manaslu has contributed the largest share of government revenue, or Rs. 19.5 million. Around 200 climbers scaled the mountain this autumn.

Likewise, Amadablam (6814m) came second in terms of revenue generation in the season, collecting Rs 5.6 million. According to the DoT, a total of 121 members from 10 teams had received expedition permits for Amadablam in this season. Mt Saribung came third in revenue generation with Rs 2 million, followed by Mt Dhawalagiri (8167m) with Rs 1.8 million and Mount Himlung (7126m) with Rs 1.5 million.

The DoT said it does not have any role in sharing and repatriation of such collected expedition royalties. The government takes the decision on the basis of Mountaineering Expedition Regulation 2002 AD. The department only collects the royalty and deposits it in the government treasury.

Figures compiled by the department exclude royalty collected by Nepal Mountaineering Association (NMA) from small peaks. Among 92 peaks yet to be climbed, the government had opened Mount Gurja (7913m) this year for climbing. From two teams, 11 members received expedition permit for Mt Gurja contributing to Rs 321,187 in expedition royalty to the government. However, in the first attempt on this peak, nine climbers including five Koreans and four Nepalis had got killed in avalanche at Gurja Base Camp.

KATHMANDU, Sept 7: Mountaineers are found attracted to scale the 8,163-metre-tall Mount Manaslu this autumn. The Department of Tourism has... Read More...

KATHMANDU, Nov 19: One thousand and two hundred climbers of 164 groups have acquired permission to climb mountains in this... Read More...