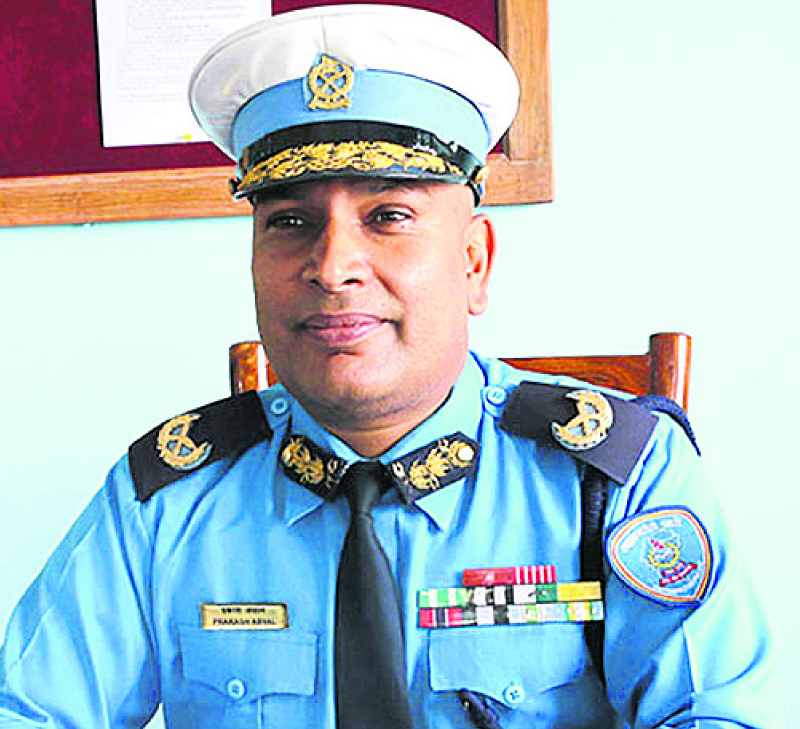 KATHMANDU, APRIL 10: The government has named DIG Prakash Aryal as  Inspector General  of Nepal Police (IGP) in what appears  to be the “final episode” of a lingering drama in the appointment of the chief of a key security agency.

A meeting of the cabinet on Monday promoted Aryal to  the post of IGP “based on the principle of merit”.

Minister for Law, Justice and Parliamentary Affairs Ajaya Shankar Nayak said  Aryal was found to be ahead of the two other contenders ---DIG Nawaraj Silwal and DIG Jaya Bahadur Chand---in terms of merit.

Nayak said that the decision was taken on the basis of the performance evaluation report submitted by a committee  formed to look into the internal appraisals of the three contenders.
The committee included the attorney general, the secretary at the Prime Minister’s Office, the home secretary, the law secretary and the acting IGP.

“In the internal appraisals, Aryal had earned 154.2 points for his four-year tenure as DIG, while Silwal had earned 152.4 points,” a minister told Republica  anonymously.

In staying the appointment, the Supreme Court stated that the government had disregarded  Rule 41 of the Nepal Police Regulations and other criteria, including seniority, performance, skillfullness and ability to command.  The apex court stayed the appointment following a writ petition lodged by DIG Silwal.

Aryal was born on  June 28, 1963 AD in Dang district. He started his career as an inspector on  April 11, 1988. Aryal is known in the Nepal Police for his strong initiative against  poaching and smuggling of wildlife. He is also credited with taking multiple steps to modernize the traffic policing system in Kathmandu Valley.

“His contribution to modernize the traffic system in Kathmandu Valley with the introduction of body-worn cameras, smart traffic booths and strict lane-discipline enforcement won accolades from a wide arena,” Nepal Police headquarters said in a statement.

Aryal takes the helm of the Nepal Police at a critical time and faces multiple challenges. The biggest test of his career will be  maintaining law and order during three sets of upcoming elections-- local, provincial and national.

Former and current police officials say the initiatives Aryal would take to modernize and better equip the Nepal Police are going to be important.

“It’s a critical time for the Nepal Police as the nature of crime is changing rapidly. There is  need for a complete overhaul to keep the police prepared to maintain law and order. His role will also be important in upholding the integrity of the Nepal Police,” a senior police official told Republica.

Who is Prakash Aryal?

Prakash Aryal was born on  June 28, 1963 AD in Dang district. He started his career as an inspector of the Nepal Police on  April 11, 1988. He also headed the National Central Bureau (NCB) Kathmandu, INTERPOL.

Upon his promotion to Deputy Inspector General (DIG) on December 19, 2012, he served as Director of Central Investigation Bureau (CIB), Head of Metropolitan Traffic Division, and Head of Research and Planning Directorate at Police Headquarters, and also took command of the Mid-Regional Police Office, Hetauda.

KATHANDU, Nov 11: The government is preparing to remove Uprendra Kanta Aryal, Inspector General of the Nepal Police, from his... Read More...