Govt borrowing Rs 13.73b from WB for employment programs 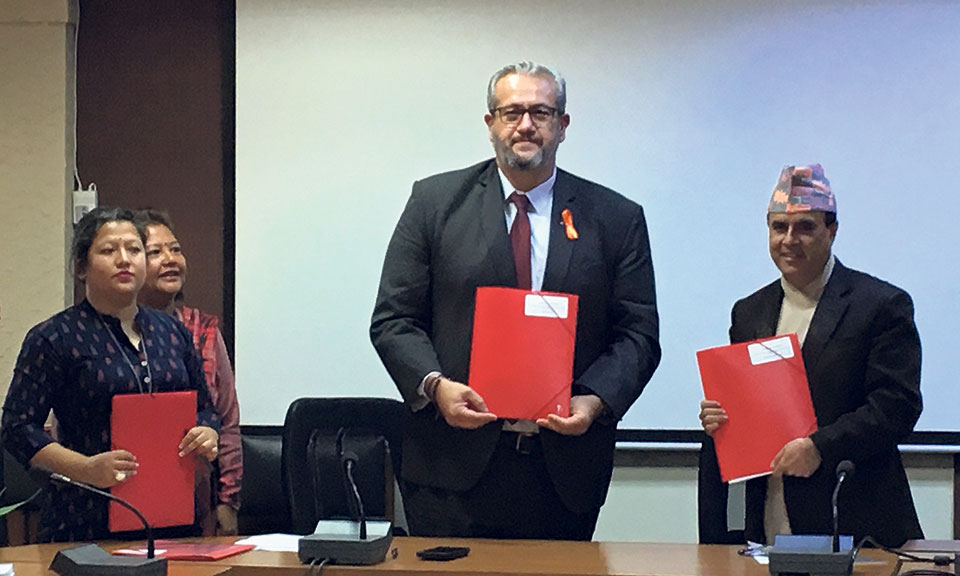 KATHMANDU, Nov 28: The government is borrowing Rs 13.73 billion, or US$ 120 million, from the World Bank to finance its employment program.

Despite concerns over use of loan amount from multilateral development partner to bankroll the employment program, the government has decided to move ahead with its plan to borrow from the World Bank.

Secretary at the Ministry of Finance (MoF), Rajan Khanal, and the World Bank Country Manager for Nepal, Faris H Hadad-Zervos, signed an agreement to implement ‘The Youth Employment Transformation Initiative (YETI)’ in Kathmandu on Wednesday.

According to government officials, the project ‘aims to strengthen the systems and services for employability including programs such as the Prime Minister Employment Program (PMEP.’

The project will benefit 100,000 young people, support Employment Service Centers (ESCs) established in each local unit, and create temporary employment opportunities in infrastructure projects and provision of services to engage up to 35,000 vulnerable individuals and yield about 3.5 million work-days annually, according to a joint statement issued after signing of the agreement.

Ministry of Labour, Employment and Social Security will implement the project over a period of five years.

The decision to borrow money to finance the project has also raised questions over the government’s policy to use international debt mostly on infrastructure projects. However, officials of the Ministry of Finance and the World Bank defend the program, saying that it will not only help create employment opportunities at the local level but also support the infrastructure projects initiated by local governments in the federal set-up.

“Over half of the funds will be utilized to pay wages to workers mobilized for the local infrastructure projects that have been approved in the annual budget of local governments,” Shreekrishna Nepal, a joint secretary at the MoF, told Republica.

“There will be public scrutiny. The fund will come through the national treasury system. The accounting system will be of national standard. This fund will be transferred to the local units as part of conditional grants to them,” said Nepal, who also heads the International Economic Cooperation Coordination Division at the MoF, adding that the local units will be allowed to spend the money only on payment of workers’ wages employed in development projects.

Amid worries that the money could end up on handouts as has been widely reported last year about instances of doling out funds for works like gardening and cleaning, the World Bank Country Manager Hadad-Zervos said that there are enough safeguard measures to make sure that the project meet its purposes.

“The system and processes designed not only at the center, but also at the local level, ensure that proper people will be identified that need this type of job opportunities, transparency in payment and sustainability of jobs,” said Hadad-Zervos.

Asked why the World Bank that should have made investment in infrastructure projects was lending the government for employment program, he said that the funding will ultimately help development projects at the local level.

BIRENDRANAGAR, Jan 16: The Chief Minister Employment Program, which aims at employing jobless people of Karnali Province, is about to... Read More...