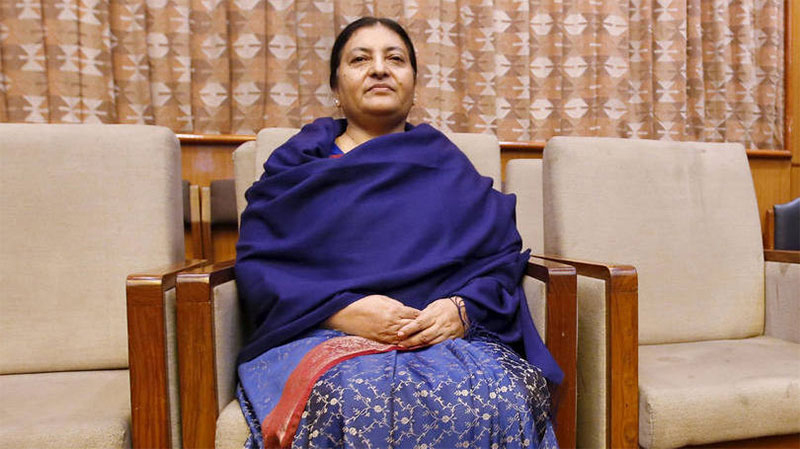 KATHMANDU, Dec 23: President Bidya Devi Bhandari today termed the contribution of the government lawyers as being important for giving justice to the communities without access to justice.

Inaugurating the 'First Conference of Government Lawyers of Nepal' here at the Office of the Attorney General of Nepal, she argued that the government lawyers' contribution will continue to remain so that all citizens can access justice.

"The Attorney General and government lawyers – the important organs in criminal justice system – must remain vigorous in maintaining the rule of law," President Bhandari said.

She said the government attorneys' activity is mandatory for upholding country's democracy, peace and security, rule of law, ending impunity and strengthening criminal justice system for protection of human rights.

On the occasion, Prime Minister Pushpa Kamal Dahal spoke on a different note reiterating that the parties would reach an agreement soon on amending the constitution and holding the elections.

"There have been disputes and debates among the parties on the subjects of constitution amendment and election, but it will not last for too long; it is temporary, the government will soon create an environment for consensus," PM Dahal assured.

The PM said the parties must end the dispute like they had once come together when promulgating the new constitution, and called for creating an environment for discussion at the Parliament on issues sowing discontent.

PM Dahal further stated that the three-tier elections must be held within 13 months as per the constitution's spirit and sentiment, and added that the local body election must be held in the Nepali month of Baisakh with provincial and central elections taking place in Mangshir.

The state must also follow law not just the citizens, PM Dahal said, while underscoring the need for government lawyers to remain capable to end impunity, uphold the independence of judiciary and consolidate rule of law.

Chief Justice Sushila Karki said the Supreme Court has launched a campaign to provide access to justice for the poor, backward and deprived communities and that the government lawyers would play an important role in this drive.

She also stressed the need for increasing the number of court cases won that are handled by government lawyers, notifying that many cases handled by them were found defeated for the lack of substantial evidences.

Likewise on a different context, Speaker Onsari Gharti said there was no alternative for all political parties to come together to let the obstructed parliamentary business resume while expressing hope that disputes among the political parties would end soon.

Similarly, other participants including Minister for Law, Justice and Parliamentary Affairs Ajaya Shankar Nayak, Chairman of Nepal Bar Association Sher Bahadur KC, Chief Commissioner of the Truth and Reconciliation Commission Surya Kiran Gurung viewed that the conference would be an important area to increase activeness of government lawyers at work and make future plans accordingly.

Attorney General Raman Kumar Shrestha viewed that proportional representation should be taken into account on appointing judges so government lawyers do not feel that they are sidelined in the process.

The total 352 government lawyers' representatives from across the country have participated in the three-day conference with the main theme – 'Effective Prosecution, Strengthening Defence, Professional Government Lawyers: Our Commitment'. RSS

KATHMANDU, Mar 29: President Bidya Devi Bhandari has stated that the government should have maintained diplomatic relations with neighbors for... Read More...

Prez Bhandari files her nomination for another tenure