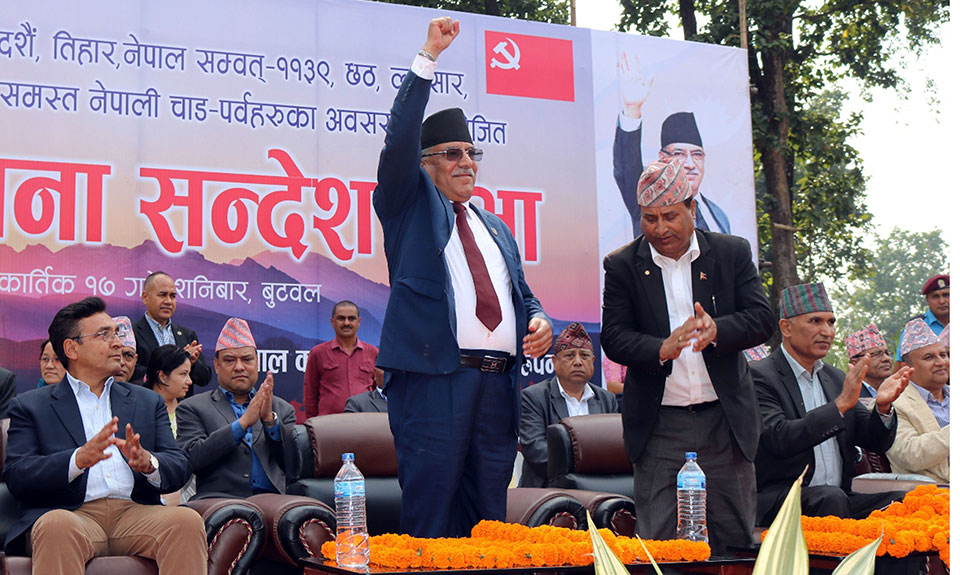 At the greetings exchange and tea reception hosted by CPN Rupandehi chapter here on Saturday, chairman Dahal said they had merged then CPN (UML) and CPN (Maoist Centre) by keeping the national interest at the centre.

He further shared that the party unification process would reach out to grassroots level very soon after removing some technical complications. He asserted that the CPN has no other objective but to propel national prosperity and development.

Chairman Dahal argued the government is focused on drafting various laws and would move with full speed towards its commitment for development. Former Prime Minister Dahal blamed some reactionary forces of creating rumour against the government.

Also speaking on the occasion, party general secretary Bishnu Poudel said the unity between the two parties was an example for all. He added that the party has to discharge added responsibly after its merger.

Similarly, party standing committee member and Chief Minister of Province-5 Shankar Pokharel committed to materialize the slogan of development and prosperity. He also claimed to make the province exemplary on development front.

Party leaders Top Bahadur Rayamajhi, Chhabi Lal Bishwakarma, Chakra Pani Khanal and Onsari Gharti, among others had urged the party leaders and cadres to join their hands to materialize the mission of national prosperity.

WHO expresses serious concern over fast-spreading pandemic in Nepal, calls for emergency aid
12 hours ago

Beholding a tour to space!
21 hours ago