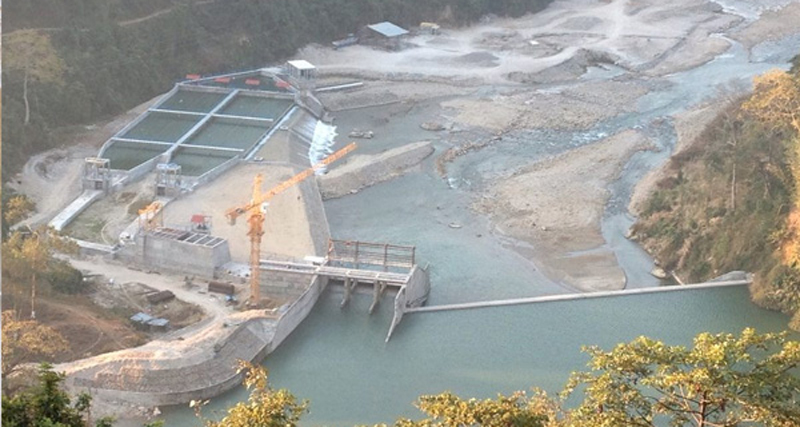 File Photo. A view of Sanima Hydropower plant in Ilam.

KATHMANDU, Nov 5: The government has so far issued survey licenses to hydroelectricity projects with the combined capacity to generate 24,656 megawatts power.

The power generation capacity of the projects getting the survey license is nearly 10 thousand more than the target of 15 thousand megawatts which the government has set to generate in the next 10 years.

Among the projects getting the survey license, 36 are of the capacity of generating more than 100 megawatts. Their combined capacity is 13,031 megawatts.

Similarly, 52 projects getting the survey license have the power generation capacity in the range of 25 megawatts 100 megawatts. Their combined capacity is 2,754megawatts.

In the recent years, the private sector too is focused on constructing this category of hydroelectricity projects.

Among the projects getting the survey license issued by the Department of Electricity Development include 205 projects with the capacity of one megawatt to 25 megawatts. Their combined production capacity is 2,071 megawatts.

Likewise, the Department has issued survey license to 19 projects with less than one megawatt capacity. The combined production capacity of these projects is 14 megawatts.

The White Paper issued by Minister for Energy, Water Resources and Irrigation Barsha Man Pun on May 8 has set the target of generating 10 thousand megawatts power for internal consumption and 5,000 megawatts for export within the next 10 years.

The government has a target to construct 3,000 megawatts hydropower projects in the next three years, and 5,000 MW projects in the next five years. Hydropower projects with 3600 MW are under construction, which will complete in the next three years, according to the Independent Power Producers' Association, Nepal (IPPAN), a non-profit, non government autonomous organisation involved in developing hydropower. Likewise, 6000 MW projects are lining up to get the power purchase agreement.

The construction of 726 MW hydropower projects invested by subsidiary companies of the Nepal Electricity Authority would be completed in the next fiscal year, said the NEA.

The NEA invested 14 MW Kulekhani and 60 MW Trishuli III 'A' that are under construction will be completed in next some months. RSS