Murmu walks in broken leg after being unable to pay Rs 5,000 to govt hospital 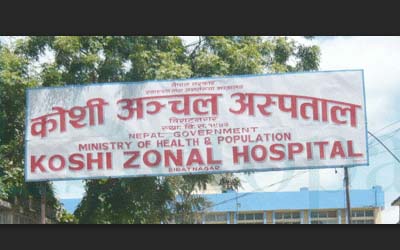 BIRATNAGAR, Jan 8: Both the federal and provincial governments have been claiming that medical service is being easier and reliable for the public these days. However, the reality is different.

Amid widespread news about stranded patients in private hospitals after being unable to pay fees for health services, government hospitals too are no exception. Common people have been deprived of getting proper treatment owing to their inability to afford the charges even in government hospitals.

Among many, Sukal Murmu of Kanepokhari-1, Bisangpur, Morang is one who has been counting his difficult days at Biratnagar-based Koshi Zonal Hospital. Having been unable to pay Rs 5,000, he has been deprived of health services at one of the largest state-owned health institutions of the country.

Murmu came to the hospital three months after his leg got fractured. A laborer in the construction sector, 41-year –old Murmu fell off a house-roof. “The contractor fled away leaving me helpless. I didn’t have money. Having no other option, I tried some domestic methods for the treatment. But it didn’t work,” shared Murmu.

Belonging to the marginalized Santhal community, Murmu is the only bread earner for his 6-member family. He took a loan of Rs 5,000 and got admitted to an orthopaedic ward of Koshi Zonal Hospital only 10 days ago. The petty amount was spent in no time for several tests and buying medicines.

The surgery of his broken knee was scheduled for Wednesday. He was already in the apron as well. When he was about to be taken into the operation theatre, he was asked to show the receipt. His wife Fulmuni showed one which they had obtained after paying for the blood tests. However, the hospital staffers demanded the receipt as proof of payment of Rs 5,000 for the surgery. “We don’t have any money,” they said. “We can’t proceed ahead unless you clear all the fees,” the staffers responded. The apron was put off and he was sent back to bed.

“It’s almost sure that my treatment is not possible. I am thinking of returning home,” exhausted Murmu said adding, “My family has been having hard times since my accident.”

Spokesperson of the hospital Bishnu Bahadur Budhathoki informed that Murmu might receive discounts on treatment if he has references from the local level. He said he was not aware of this particular case though.

Mayoral candidate Dhakal plans to transform Biratnagar into a megacity