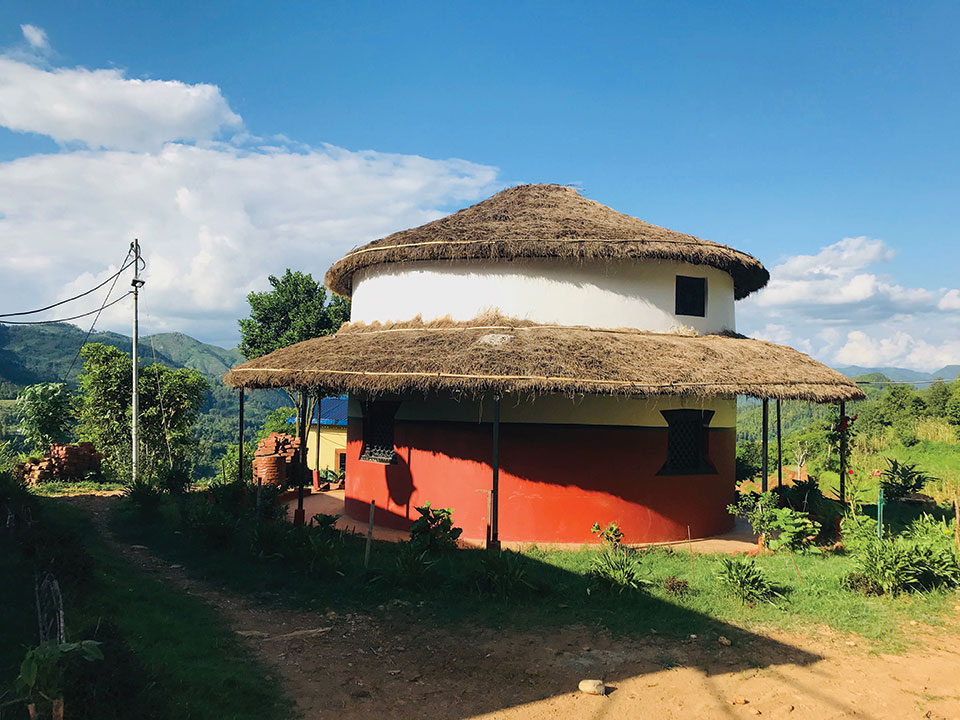 TANAHU, Aug 27: Rural parts of Tanahu district used to have plenty of round shaped homes in the past. As modernity encroached upon the settlements, concrete buildings replaced those traditional houses made of mud and hey. The earthquake of April 2015 took a further toll on them, and the consistent aftershocks left the villages with only the frames.

However, thanks to the increase in tourism activities in the district, round-houses are gradually coming back into existence.

“Traditional round-houses have been revived in the district due to growth of home-stay services in the district,” said Batumaya Gurung of Hilekharka. She chairs the Hilekharka Community Home-stay Committee. “Tourists do not like to stay in concrete houses, they prefer to live in traditional houses and environment,” she added.

There are some specialties of the round-houses. These houses are typically painted with red mud and have white mud borders. The front yard is also painted with red mud, and their roofs are thatched with hey. These houses have a single door and tiny windows. Interior space is small, with a slight partition between the kitchen corner and other rooms.

“The design was of course not designed by an engineer but had evolved over time as per people’s need. Homes made of clay and hey protect its inhabitants from both hot and cold and could be built with limited resources. As such, it suited people in rural areas,” narrated Gurung. “The homes were shaped round for aesthetic and practical reasons,” she added.

Locals state that such houses were in use until a decade ago. As roads touched the villages, locals could order construction materials for building concrete homes. Modern buildings were looked upon even as a status symbol, apart from the comfort it would offer for the occupants.

“Modern buildings started to mushroom, and the old houses gradually disappeared. Road connectivity actually changed the entire lifestyle of people. The only people who were still living in traditional houses were the ones who could not afford to build a modern house,” Gurung asserted.

But tourists loved originality. Rather than the new homes, and residents leading a lavish lifestyle, they were seen mesmerized by local and traditional lifestyle. Small hotels and restaurants would get few tourists while those who initially started home-stay in the settlements got to welcome a considerable number of tourists.

“Few tourists would come to our villages in the past. As their number increased with time, their taste and choice of course begun to matter us,” said Gurung. “And the round-houses were something they admired and preferred.”

A lot of villages in the district now offer home-stay service to tourists. And the round-houses are being conserved for the sake of tourists. At some places, people have used sand and bricks to build round-houses instead of using traditional mud and hey construction material.

“The mud house needs a lot of care and treatment, while concrete structures are relatively durable and demand little attention. So, many people have been building old-style homes with modern materials,” said Gurung. “But as far as possible, it is good to have the same old quality of home in place,” she added.

At Hilekharka village there are two round shaped houses which are 100 years old. Locals have preserved these homes with great importance.

“We have been sensitive towards all existing round-houses, and mainly the two are now the apple of our eye,” Gurung said.

According to Hira Gurung, president of Gopitar Community Home-stay, the provincial government has also supported locals for tourism promotion. The support includes funds for the conservation of the round-houses.

“The Gandaki provincial government has provided Rs one million under ‘Home-stay promotional program’,” she said.

With that one million added with labor contribution worth Rs 800,000 by locals, the village has come up with classy round-houses in the district.

“Earlier, there were only round-houses in our village. But the trend to build concrete houses nearly killed all the old structures and lifestyle,” said Hira. “But due to tourists’ interest in them, we have been forced to revive the old fashioned houses,” she added.

Locals are excited about the surge of tourism-related activities in the region. Construction of the Mid-Hill Highway has also elated their spirit. Once the highway comes in full shape, it is expected to boost tourism region dramatically.

41 people fall ill after a feast

TANAHUN, June 30: Forty-one villagers have been taken ill after attending a feast hosted by their neighbor. The incident took... Read More...

TANAHU, Oct 24: The works of building facilities for Tanahu Hydroelectric Project, as part of the preparatory works of the project,... Read More...