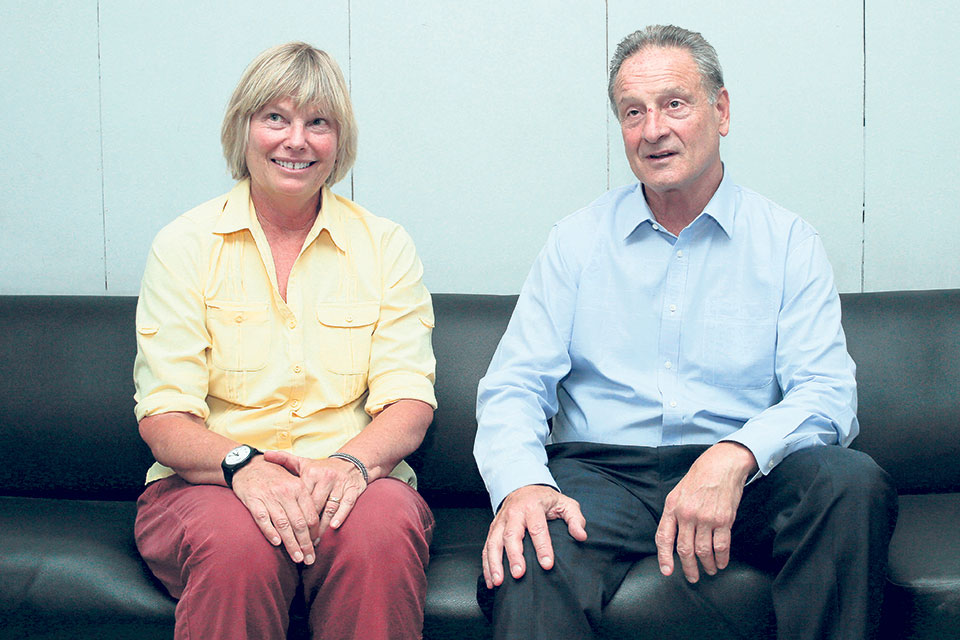 Melinda Laituri (left), professor of geography at Colorado State University, and Lee R Shwartz, The Geographer at the US Department of State.

The US Department of State in partnership with Kathmandu Living Lab is helping to create a robust Open Street Map (OSM) data of Kathmandu and Pokhara cities and develop a community that is able to update, maintain and make effective use of the collected data. As part of the project, local people, community and various government and non-government organizations are engaged voluntarily in the mapping activities, helping them understand various mapping tools which can be of use for various purposes including in disaster response.  Lee R Shwartz, The Geographer at the US Department of State, and Melinda Laituri, professor of geography at Colorado State University who is also the principal investigator of the project, were recently in Kathmandu to participate in the State of the Map Asia (SotM-Asia) annual regional conference OpenStreetMap (OSM) organized by OSM communities in Asia. Republica’s Sagar Ghimire talked with them about the concept of open data and importance of open street mapping. Excerpts:

What is the concept behind the open data? What data means to the public and why it should be public?
Shwartz: As a government, we understand that each government has to protect some data that can’t be shared, some of it may be personal data or it might be something that threatens the personal security. There are varieties of reasons why the government needs to protect data. But most governments would want to share their data and make it available to other governments, international organizations like the United Nations, and to the end-users, be it planners or citizens. The challenge is how to make that data available in a way that is most powerful, that can be shared easily between different systems, don’t depend necessarily on having specialized software or specialized skills. So, it’s not just question of  the power of open data, it’s the question of empowering open data so that it can be made more useful while at the same time protecting the data that needs to be protected. The balance sometime could be delicate. But in the end, we think that more open data is better for all societies than closing the data.

Laituri: An important aspect for this is world’s participation with respect to creating open data. Where does the data come from? Certainly, there is existing data that the government has. But, then we are talking about community-based data generation. So the communities themselves making decision about what data they want to have collected, what they like to be able to share and how that process might work. So, it’s really important to have a bottom-up approach as opposed to top-down. This brings both of them together to provide open data because we have both the existing data of the government and newly derived data that citizens are creating through various mechanisms such as apps and mobile technologies.

What is open street map and how are the communities involved in it?
Laituri: In a number of ways, it’s really important to first identify the community in order to identify the stakeholders in that particular community to make sure they have understanding and awareness of what mapping activity is going to take place. Then they can define the rules by which mapping will take place. So, they are participating through every step. When I say community, I use in a very comprehensive way: student groups, NGOs, and the local governments. We reach out to the community and work with them in terms of identifying what their need might be within the particular neighborhood or within particular part of the city.

How the open street map is useful for us?
Shwartz: One of the best examples of open mapping traditionally has been the law enforcement. We have somebody in the conference from Nepal Police to speak. That is very good example when the police rely on information from the people and then people rely on knowing that the police are responding to information. You can actually map areas where crimes are taking place, areas where street lights are out so it’s dangerous to walk. All of these contribute to being able to analyze where the police needs to focus for law enforcement. That’s probably one of the most tried and true examples of the success between government and citizens on open mapping.

Laituri: It depends on what the topic is and how it will be used. For example, in Pokhara a comprehensive base map has been created and whole number of new data has been collected that wasn’t there before. Some of it is for emergency preparedness so that people will know where to go, where are the shelters, from where they can access water when disaster strikes. Other things might have to do with where we locate recycling sites, where we dump our wastes and how it gets collected. These kinds of things help to manage the local communities on what they need to do to function on daily basis.

The open mapping process is all about the citizens’ initiative and involvement. Since you work with a government agency, how do you see the credibility and accuracy issue of the data?

Shwartz: We are very concerned with accuracy and credibility of the data. Unlike Wikipedia where anybody can go in and change the words and it’s hard to verify the fact, most of our information is something that can be observed. It is tangible and it can be observed by satellite imagery, you can physically touch it and see it whether the objective is there or not. So it is much harder to falsify works. We have processes in place to try to automate some verification and also to have mappers who are more experienced to make sure it is accurate. We found very few cases where there were false or inaccurate information that got into the database. When it does get in, it tends to be corrected very quickly by the people who live there and have access to the information.
Laituri: It is sort of self-policing because this is collective community out there that wants to make this work done with everyone’s participation. They have good process in terms of open street map by which people can be very easily trained and made more proficient in mapping.

Open map data was also used during the 2015 earthquakes. Can you please share what roles open data and mapping have played in managing crisis in Nepal and elsewhere?

Shwartz: Open mapping was here even before the earthquake, in preparing for the possibility of earthquake in Nepal. Our project is to try to identify places that are prone to natural disasters so that we can get information beforehand. In case of earthquakes, it is difficult because they are harder to predict. But for typhoon, we have more success because we usually know when typhoon is coming and we can get pre-disaster mapping done and compare it with post-disaster work. While 8.3 magnitude earthquake is not something that I would recommend as a business model, it tends to activate volunteer community, and open mapping is a lot about volunteerism. It’s easier to get people to volunteer in a disaster. It’s much harder to get them to volunteer for just regular information. The explosion of participation in disaster response from open mappers has been pretty significant. If you look what happened in Haiti in 2010, it was the similar beginning of open mappers being involved in disaster response. It was similar in the typhoons and Tsunami in Japan and the Philippines as well as earthquake in Nepal. It was exponential not in the number of mappers, but the number of contributions they make. It would take individual mapper years to make that can be done by the open volunteers’ community in just few weeks.

Laituri: The key thing that we find from disasters are these important teaching moments. We learnt so much from them. While the earthquake was a pivotal moment for really enhancing open data and using data as tool, it’s now something standard practice in disaster management. Having these pre- and post-maps of disaster helps us to change the text analysis and start to track recovery efforts through additional maps as we start to recover from disasters.

Laituri: Much of it is driven by young people. So this has the potential to impact governance in unexpected ways because they are participating in governing in a way that they don’t even recognize. They are mapping their places and spaces. They have started to realize the power that they have in empowering their community.

Infographics: Petrol is the most expensive here

Petrol is the most expensive here ... Read More...

KATHMANDU, Oct 16: There is one Buddhist nun everyone in Nepal knows by name — not because she's a religious... Read More...